With the NHL season under way, it is important to get familiar with scoring on the major fantasy sites. With FanDuel and DraftKings having different scoring systems, it changes how one builds a lineup. Goals, assists, and shots on goal are all weighted evenly, and are the stats we aim for. Goalies are also evenly weighted across the sites. DraftKings does not weigh power-play points into the scoring, unlike FanDuel and DraftDay. When making a lineup, it is ideal to find skaters that are on one of the two power-play lines, and is crucial on the other two sites. On DraftKings, I don't feel the necessity to include all players on these power-play lines, although it is still encouraged. Power-plays are a man advantage for one team, and increase the odds of fantasy points for your players. We are always trying to maximize scoring opportunities for our skaters.

Blocked shots is another difference from FanDuel, and DraftDay has this too. It is weighed the same as shot on goal, and is a stat to look for when choosing value defenseman. If you are building a lineup with tons of star power for forwards, adding value defenseman who block shots is a strategy to go with. It is also a key stat to look for in any fashion, because it is not a sexy stat, the casual player may overlook it. If you can add a few blocked shots to a stellar stat line, those 1.5 DK points can make a difference come the end of the night.

DraftKings incorporates a few fun bonuses for skaters. One is the hat trick bonus, which is a rare accomplishment, but is rewarded. A shorthanded goal or assist is also a bonus. This is a tough stat to predict for a night's slate, so consider this a lucky bonus if it happens to you. Shootout goals are included, which personally I am not a fan of, but will not likely happen anymore with the overtime rule changes. No other site includes shootout goals. There is also no penalty minute bonus, which FanDuel includes.

One of the biggest differences from FanDuel and any other site, is the plus/minus stat. If you are unfamiliar with plus/minus - if a player is on the ice for a goal scored, it is a plus. If he is out there for a goal against, it is a minus. Pretty simple. FanDuel counts these plus/minus, which can be frustrating at times, and is also something to look at when building lineups. On DraftKings, building lineups is a little easier not worrying about plus/minus. A player can rack up an assist, and by the end of the game can have it wiped out if he is out there for two goals against. This leads to us finding players who are likely to be on the winning sides. While a player may have a good matchup, it is quite possible he could be out there for a lot of goals against, which limits upside.

FanDuel has the power-play bonus, and it keeps you focused on inserting players on those power-play lines. Teams who capitalize on power-plays, and go on the power play often are generally the high salary players we want on our team. If you are looking for a more involved scoring system with power-play bonuses, and the plus/minus, FanDuel is a great place. Outside of those two scoring notes, FanDuel is very simple. There are no blocked shot bonuses, hat trick bonuses, or shorthanded point bonuses.

NHL is one of the “minor" major sports, but that is not the case at DraftDay. They are the third site in the industry, where NHL is popular. They take the best of both sites and combine them, with the power-play bonus, shorthanded point bonus, and blocked shot bonuses. There is still no plus/minus, which some enjoy, and they do not offer any other crazy bonuses. Overall the interface makes hockey a fun game to play on DraftDay, and I recommend playing there for beginners. 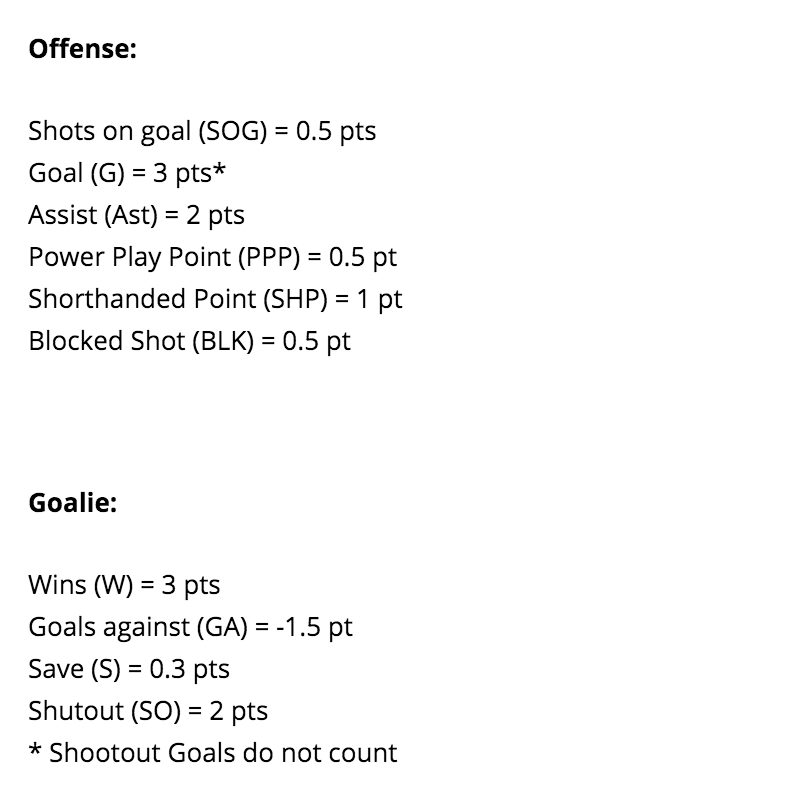 There are no differences for goalie scoring across the three sites, but goalies are an important piece to get right, due to the scoring. A win is important, being three points, and also can be a player who can ruin a lineup. This is often a position to not get cute with, and play the safe goalie. In tournaments someone might get a little risky and try and land a lower priced goalie. Finding goalies who face a good amount of shots, don't allow goals, and have get w's are the simple answer for this position.

DraftKings, DraftDay, and FanDuel all carry awesome contests, but also have something for everyone. If you are looking for an involved game, FanDuel's plus/minus scoring system adds to that. DraftKings and DraftDay create a more relaxed feel, allowing you to take the plus/minus stat out of your research. All-in-all, each site offers a great NHL experience.