Using Vegas to research a night's slate is no different from any other sport. Generally this is your first stop before starting to look at lines, and setting your lineup. Vegas odds are very accurate, and can be a trustworthy source for finding winning goalies, and high scoring teams. A game total is usually set at 5 or 5.5 goals, but that .5 is a good size difference. If a team is heavily favored, they will likely be scoring the majority of those 5, or 5.5 goals. Finding favored teams, and big totals leads you to your goal scorers. 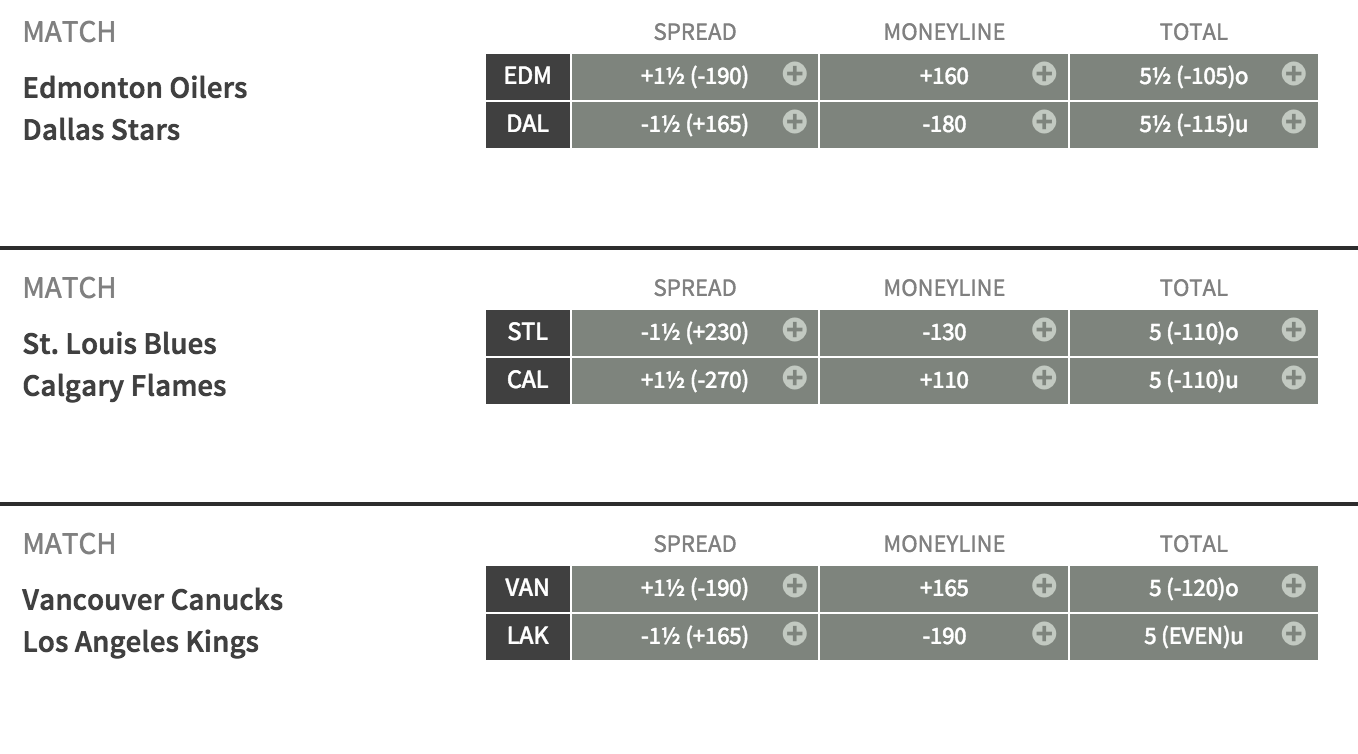 The money-line and spread come into play on a site like FanDuel with plus/minus stats rolled into their scoring system. You will also use this for selecting goalies. Looking at the three games above, they each tell a story for us to use when setting lineups.

Oilers-Stars - Out of the three games, this has a 5.5 goal total, likely being the higher scoring game of the three. Dallas is a good size favorite at -160, and also have a decent chance of winning the game by two or more goals. (+165) In these three games, Dallas is my favorite team to target for skaters. With the odds in their favor of winning by two, 3.5 goals is a good estimate of what they will be scoring this night. On FanDuel, with the plus/minus, it might be best to avoid Edmonton. On DraftKings, I wouldn't mind taking a shot or two at an Oilers player, due to not having to worry about the plus/minus.

Blues-Flames - This game is predicted to be a tight one, with the Blues narrowly favored. With an over under of five, and such a tight money-line, I would be a bit picky selecting from this game. For a cash game goalie, I would likely avoid the two goaltenders, just due to the win being in the air. Those win points are very crucial to having success on a slate. Because this game does not have high appeal for goaltenders or skaters, it is a game to possibly target for tournaments.

Canucks-Kings - The Los Angeles goaltender jumps out at me based on these Vegas lines. The Kings are favored heavily, with a total of five, and have decent odds to win by two. Vancouver checks in at an estimate of two goals scored, which is a number to target when selecting goalies. Anything more than that allowed, you are likely in trouble. Seeing these numbers, I am also drawn to the Kings' skaters. Unlike the other five goal total game (Blues-Flames) the Kings are heavily favored, and should be scoring a majority of those five goals.

Most teams will come in with a 2.5 goal total on the night, and on occasion we will see a 3.5. Those 3.5 totals should be highlighted in your brain for selecting players already. We see that here with the Stars. The Blues have a slight chance to put up three or more goals, while the Flames are underdogs to do so. The Canucks have the worst odds of scoring three or more goals on the slate, resulting in the Kings to likely push three or more goals by. While we could tell this from the money line and spread, team totals paints a clearer picture.

Researching player props can give you an advantage over the casual player. Looking at some props from the Stars-Oilers game, we can key in one some possible goal scorers. Patrick Sharp is at +200 to score one goal tonight, which is an excellent number to target for skaters. There are also props for shots on goal, like with Tyler Seguin, who is favored to take more than three shots. We want players that shoot in our lineups, with the reasons being obvious, goals! There are other props listed, like odds of a player scoring more than one goal, and who will record the most points.

Goalies also have props, and these are great to use. Jonathan Quick has a player prop set for 26 saves, with a -115 favor for over/under. We do want our goalie to face shots to rack up points, because there isn't anything more frustrating than a goalie allowing just one goal on 17 shots faced. These props work well when trying to figure out an end line for a goalie.

Starting off with Vegas shrinks your research time, and efficiently helps you build lineups for a night's slate. Find goalies with teams who are -180 or more favorites, and skaters with high goal totals. The plus/minus stat on FanDuel will cause you to lean towards the favored teams, while on DraftKings things you are a little more free to do as you please. Remember the people behind these lines are pretty smart, and help us take advantages in fantasy.