The Boston Red Sox followed up a World Series Championship 2013 season with a worst place finish in the American League East. A revamped offense is the primary motivator behind the projected jump from 71 wins in 2013 to 85-86 this year.

Fenway Park takes a bite out of left-handed homers (a 34% difference in homers hit by lefties at a neutral park), but it's not all doom and gloom for lefties. They get a monstrous boost, 53%, to their doubles and triples. Right-handed batters also get a lift hitting doubles and triples and they don't sacrifice much in regard to homers when compared to a neutral park. Pitchers with a high fly-ball rate won't have an easy go of it, and they'll be dinged in daily fantasy ranks when pitching in Boston.

Vazquez was a superb pitch framer in his rookie season, and with a reputation as a strong defensive backstop, that's not terribly surprising. He'll aid the starting rotation in getting borderline strikes, and that's big news for Joe Kelly, Wade Miley and Justin Masterson in particular. Ryan Hanigan's rank in pitch framing is solid, and he's performed better as recently as 2013 ranking 14th that season. Both men donning the tools of ignorance will help get the max out of a mediocre rotation. 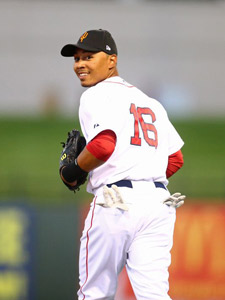 1- Who will win the center field job?

Rusney Castillo was the favorite to win the job, but he's going to miss more than a week with an oblique strain. His absence will open the door for Mookie Betts and, to a lesser extent, Jackie Bradley Jr. to bypass him as the favorite. Bradley starting would be the worst imaginable daily fantasy outcome since his value resides in his excellent defense.

Castillo made the most of his 40 plate appearances in the majors last season by swatting a pair of homers and stealing three bases in three chances. The power and speed combination will appeal to daily fantasy gamers, but his projected lineup slot hurts his run production potential. Even dating back to his time in Cuba, Castillo hasn't shown the type of patience typically found near the top of a lineup.

Betts clobbered minor league pitching before finishing the season with a nearly seamless transition to the Show. The youngster ripped five homers and stole seven bases while walking in a robust 9.9% of his plate appearances and striking out just 14.6% of the time. He's an exciting second-year big leaguer who will undoubtedly have a daily fantasy impact this year.

2- Who will win the leadoff gig?

The center field battle could go a long way toward determining the leadoff hitter for the Red Sox. Shane Victorino is the favorite to hit there to open the year, but after tallying a 137 wRC+ in 98 plate appearances hitting first last year, Betts could challenge him for that spot if he breaks camp as a starter. The Red Sox offense projects to be very good, and their leadoff hitter will hold a great deal of value in daily fantasy games this season.

The Red Sox didn't screw around in the offseason when it came to adding offensive firepower. Hanley Ramirez and Pablo Sandoval contracts combine to be worth more than $170 million. Ramirez played shortstop exclusively last year, so gamers will want to see where he's eligible to be used in daily fantasy games to open the year. His value would be through the roof if he retained shortstop eligibility early in the year, but it's possible he'll be stripped of that eligibility and become another solid option in a deep outfield pool.

There is mini-stack potential for the first three hitters in the order when the Red Sox face lefties if the projected order comes to fruition. Meanwhile, David Ortiz's and Pablo Sandoval's exploits versus right-handed pitching make them a nice pairing when Boston is facing a right-handed hurler. Boston's lineup has some length and intrigue through the number eight spot, but not including their catchers, who figure to hit ninth. The down-order hitters could be value plays this year on nights the Red Sox face bad pitching.

The pitching outlook isn't as rosy. Only one starter, Wade Miley, cracked the 20% strikeout threshold. He was pitching in the National League last season, though, and facing American League lineups that feature a designated hitter could put him in danger of joining his rotation brethren in the sub-20% strikeout club. They won't all evaporate, though, and he'll have some daily fantasy appeal when facing poor offenses. It should be noted Miley's new home will separate him from the top pitch framing catcher in 2014, Miguel Montero, so don't project an improved walk rate due to the excellent pitch framing catchers he'll be throwing to this year. His lower walk rates from previous seasons do portend well for a slight improvement, however.

The team's de-facto ace, Clay Buchholz, is only one year removed from a brilliant, albeit injury shortened, 2013 campaign in which he totaled a 1.74 ERA (2.78 FIP) with a 23.1% strikeout rate in 16 starts. He possesses rebound potential.

The gains Rick Porcello made against left-handed batters (.320 wOBA allowed in 2014 compared to .350 for his career) helped him turn in a career year last season. He's capable of pitching deep into games, which will put him in favorable position to earn wins. That said, he's not an asset in strikeouts. Porcello will hold more value at FanDuel where wins are more important for pitcher scoring than at DraftKings as a result of the lower point total awarded for strikeouts.

Injuries could help explain Justin Masterson's struggles last season, but his career year in 2013 looks like an outlier. He's not someone who should be trusted on daily fantasy rosters early in the season. Rotation mate Joe Kelly raised some eyebrows with his statement that he'd win the 2015 AL Cy Young Award. Don't be fooled by the confidence, though, he's more likely to fall out of the rotation than win the award.

Castillo's injury could get him "Wally Pipped" by Betts. The 22-year old has a bright outlook for this season regardless of whether he opens as the starter or not. Victorino should be on a short leash and pressed by whoever is the odd-man out in the outfield battle. My money is on Betts winning the job and running away with it.

There is a lot to like about Ramirez. The Green Monster will serve as target practice for Ramirez to lace extra base hits off of. He's surrounded in the lineup by talented hitters who will provide him ample run production opportunities. The problem is, he goes from a position devoid of offensive talent (shortstop) to the deepest position on the diamond (outfield). He'll face a lot of competition this year for being rostered on daily fantasy teams.

The offense will be the apple of the eye of many a daily gamer. There is mini stack potential that I highlighted above, a home park that amplifies doubles and triples, and guys who are capable of hitting the ball littered up and down the order. Daily fantasy rosters will regularly feature at least one member of the Red Sox on them.

The rotation, backed by a potential run-scoring machine of an offense, could provide FanDuel value since their lack of strikeout potential can be overlooked due to their increased likelihood of earning wins most nights. Although, daily fantasy folks could be better served knowing who's starting for Boston because of the potential to find value hitters facing their starters. Masterson is inept against left-handed batters (.350 wOBA allowed in his career) and is an easy target for attentive daily gamers to attack. Buchholz ceded a .351 wOBA to left-handed baters last year and could find himself targeted by daily gamers, too.