The betting line indicates the Orioles are projected to win more than half of their games. If things go to form, the O's should be favored to win a slight majority of their games. Daily fantasy sports sites award points for pitcher wins, making Vegas' lines a useful tool in the DFS gamer's tool belt.

Park factors are set with 100 serving as average. Each point above or below 100 is a percentage point above or below the league average. As you can see below, right-handed pitchers with a propensity for allowing flyballs will have their hands full at Orioles Park at Camden Yards due to a 28 percent boost to homers hit by left-handed batters.

In an injury shortened 2014 season Matt Wieters failed to help his pitchers pick up borderline strikes. He was a below average pitch framer in 2012 and 2013 as well. DFS gamers will want to monitor who is behind the dish when deciding whether or not to use an O's hurler, as Joseph was a strong pitch framer in his rookie season. 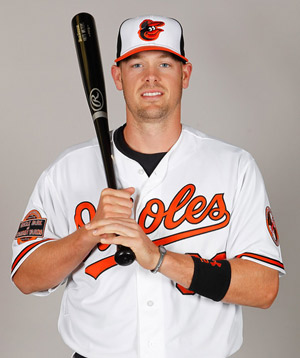 1- How healthy is Matt Wieters?

The early spring showings are good for the switch-hitting catcher who's recovering from Tommy John surgery. Wieters is in the midst of throwing program designed to build up strength in his surgically repaired elbow. Eduardo A. Encina of


The Baltimore Sun recently reported Wieters won't be given clearance to throw at 100 percent until March 17. In the meantime, he'll take some cuts early in the Grapefruit League spring training schedule serving as a designated hitter.

The hope is he'll be ready for Opening Day, but it's entirely possible that won't be the case. If he's not healthy enough to catch by then, he could serve as the designated hitter early in the season. Wieters is best avoided in DFS until he demonstrates he's able to catch a full game without incident (something he could do before the end of spring training). When he is healthy enough to join the everyday lineup, he'll likely slot anywhere from fourth to sixth in the lineup depending on the performance of others and the handedness of the opposing pitcher.

2- Will Ubaldo Jimenez crack the rotation?

The Orioles ponied up a sizable contract to secure free-agent starting pitcher Ubaldo Jimenez last offseason, and suffice to say, they didn't get the return on their investment they hoped for in year one. He was demoted to the bullpen in late August, made a pair of September starts, and finished the year with a relief appearance. He'll be given an opportunity to win a spot in the rotation, and Jimenez's ability to throw strikes will be the key to him sewing up a starting gig. Jimenez has sandwich bad years against left-handed batters around a good one in 2013. If Jimenez opens the year as a starter, DFS gamers will want to grab some left-handed batters who are facing him until he showcases the capability to handle them.

There are many familiar faces returning to the lineup from the 2014 squad that FanGraphs credits with posting the sixth best wRC+ (104). The Orioles were a top 10 offense in wRC+ against lefties, fifth (106), and righties, tied for seventh (104). One prominent member of the 2014 lineup that left via free agency is Nelson Cruz. He was an offensive stud last season, but the blow felt by the lineup as a result of his absence should be softened by the return of Wieters and the addition of breakout candidate Travis Snider.

Expect manager Buck Showalter to shuffle his lineup frequently based on the handedness of the opposing pitcher. Hitters such as Alejandro De Aza, Chris Davis and Snider have struggled with southpaws historically (Snider showed signs of real gains last year which inflated his 106 PA numbers versus LHP since 2012 in the table above), while guys like Steve Pearce, J.J. Hardy and Wieters fare better against lefties than righties. Manny Machado and Adam Jones should be mainstays in their projected lineup spots, but the players listed in the previous sentence who have notable platoon splits will likely be jostled around the lineup. Such lineup juggling can create nifty DFS bargains and will require gamers to check in on what Showalter has up his sleeve on a daily basis.

The best thing to be said about the O's rotation is that it's backed by a good offense. The right-handed starters heavy rotation won't get much help from Oriole Park at Camden Yards, a park that enhances run scoring by 15 percent for left-handed batters. Bud Norris is the highest ranked qualified starter from the O's in strikeout rate, ranking 39th in K% according to FanGraphs.

The most intriguing pitcher in the rotation is Kevin Gausman. The 24-year old was a highly ranked prospect as he climbed the rungs of the minor league ladder, and his 2014 stats flash some of his potential. Increased usage of his split finger, a pitch that Brooks Baseball shows coaxed a 21.49 percent whiff rate, would help him immensely in piling up punch outs and boosting his DFS appeal.

Snider leaves a crowded Pittsburgh Pirates outfield and a pitcher-friendly home park for a more attainable right field job and a park that enhances left-handed power. Power is Snider's greatest fantasy asset, and a 128 park factor for LHB homers is ideal for allowing him to tap into it.

At this time last year Davis was coming off a monstrous 2013 effort. This season he looks to rebound from a late season PED suspension (he still has one game to serve). More importantly, he'll have to figure out how to beat the shift. Teams shifted at an exceptionally high rate against Davis, and his BABIP plummeted as he repeatedly pulled balls into the shift. At the beginning of the year it's best to use Davis only if he's facing a right-handed pitcher with a low groundball rate. His power is still elite, and one way to beat the shift is to launch the ball into the seats.

The O's roster features a mix of players who will appeal to cash gamers and GPP gamers alike. An offense that projects to be above average will create value and consistency desired by cash gamers in the form of Machado and Jones. Those playing GPPs will be inclined to turn to all-or-nothing slugger Davis when he's facing a right-handed pitcher in a park that accentuates his power. Others such as projected leadoff hitter De Aza and middle to down order batters Wieters and Snider have a chance to emerge as value plays as well.

On the pitching side of the spectrum things aren't as exciting, but Gausman provides some hope for value in the rotation. The other starters could be of value at FanDuel when presented with favorable matchups thanks to the added emphasis of nabbing a winning starter created by their scoring structure.