White Sox general manager Rick Hahn shook things up this offseason. He added a couple of talented hitters who should slot somewhere in the first four spots in the order, and he dealt for a very good pitcher to slot behind Chris Sale. Their projected record teeters on the .500 mark, but this roster features some great daily baseball options.

Tyler Flowers is a poor pitch framer, but Geovany Soto was slightly above average in the last season he played enough to qualify. The catching situation could be fluid and become a timeshare, and that would be good news for the pitchers since he'll snag them some extra strikes. That said, Flowers' shortcomings as a pitch framer aren't enough to dissuade daily baseball gamers from using the top three in the rotation.

Who will start at catcher?

I alluded to this above, but the catching gig looks like a timeshare. Of course, if Soto does enough with his work behind the plate, it wouldn't be shocking to see him nab the lion's share of the playing time. Flowers packs enough punch to be a punt play in GPPs. From 2007-2011, Soto was great against left-handed pitchers. He's battled injuries the last two years, so perhaps poor health has contributed to his steep decline. A healthy Soto would be a solid bargain option if he could recapture some of his magic against lefties, and I'm not willing to dismiss that possibility.

Who wins the second base job?

Micah Johnson and Carlos Sanchez are duking it out for starting duties at the keystone position, but neither is an impact option in daily baseball. Lurking behind both -- and probably opening the year in utility role -- is Emilio Bonifacio. If both Johnson and Sanchez struggle, Bonifacio is in prime position to move from utility man to starting second baseman. The versatile Bonifacio's greatest asset is his speed, and he'll have some value when he's facing starting against a mediocre pitcher and a catcher who struggles to control the running game. 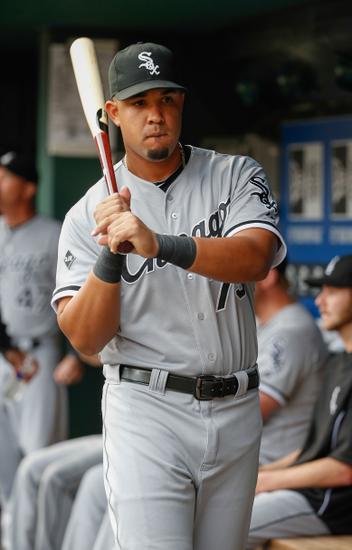 Adam Eaton is a high contact leadoff hitter who can work a walk at a respectable rate and use his above average speed to swipe bags. He hasn't been an efficient base stealer in his young career, but White Sox base-running coach Vince Coleman (yes, the great base stealer) might be able to shore up his efficiency this year. He doesn't have much home run power, therefore limiting his ceiling, but his run-scoring potential is immense.

Melky Cabrera is one of the lineup additions this offseason who should turn this lineup into a formidable one. He's a switch-hitter who is above average against pitchers of each handedness. Cabrera doesn't walk as much as the typical number-two hitter, but his great contact skills lend themselves to a high batting average. Cabrera has average-ish power, and his run production possibilities are great.

Jose Abreu is one of the best hitters in baseball. He ranked tied for fourth in homers (36), tied for fourth in ISO (.264) and fourth in wRC+ (165). Abreu punishes mistakes, makes more contact than the run of the mill slugger, and will be an expensive daily baseball option from Opening Day until game 162. That said, he'll be worth budgeting for routinely.

Adam LaRoche is a non-option versus southpaws, but he'll pair nicely in a first base/utility duo with Abreu when facing many right-handed pitchers. He'll be backed by Avisail Garcia, who has some power and speed but is largely unproven. Garcia is a strapping man who, as they say, looks the part when he steps off the bus. He's in a favorable lineup slot to pile up RBIs and will be a player who daily gamers need to keep tabs on.

Alexei Ramirez had a renaissance season last year. It was his best offensive season since 2011. He still doesn't walk much, but the bar is so low at shortstop he makes for one of the best offensive players there. His mate on the left side of the infield, Conor Gillaspie, won't wow people with his power, but when he faces right-handed pitchers he's a viable glue guy on daily game rosters.

Starting backwards, John Danks and Hector Noesi are punching bags. The only value they'll have in daily baseball is as stacking targets. The rest of the rotation looks quite good, though. Chris Sale is an ace. The lanky lefty was fourth among qualified pitchers in FIP (2.57) and second in strikeout rate (30.4% K). He'll never be cheap, nor should he be. You want an ace of this caliber, you have to pay for him.

Jeff Samardzija is one of the best number-two starters in the game. He ranked 17th in FIP last season, and his 50.2% ground ball rate will help him in his new home digs. Shark could very well prove to be a more valuable daily baseball option than Sale when factoring in their cost disparity.

Crazily, Shark might not even be the second best starter in his own rotation. Jose Quintana tallied the fifth best FIP among qualified starters last year. The southpaw improved his walk and strikeout rates for the second straight season, and he's legit. Still not a household name, Quintana probably will be by season's end.

When your value is tied to hitting homers, as LaRoche's chiefly is, moving from a home park with a left-handed batter homer park factor of 75 to one with park factor of 110 earns you an up arrow. A 35% jump in homer park factors is nothing to sneeze at. Oh, hitting behind Abreu isn't such a bad thing either.

Flowers' daily baseball value was already limited. He's still a punt play for cheap homer chasers in GPPs, but he'll have a real threat to his playing time in the form of Soto. At least he still plays his home games at U.S. Cellular Field. Beyond that, there isn't much to like about Flowers.

Abreu is a bonafide daily baseball star. He's the type of player who can put a team on his back and carry it into the money. The price points of Eaton, Cabrera and LaRoche make a stack doable for the first four hitters even with the gargantuan cost Abreu when they're facing a bad right-handed pitcher. Even the five, six and seven hitters hold daily baseball value. This is a talented bunch.