The Indians are an interesting bunch. There is talent on the roster, but the track record of the top players on this team is limited. The lineup should be well above average, and the rotation should be excellent as well. Having said that, there are questions abound. The projected win total above accounts for some of the uncertainty.

Left-handed power hitters make for a great target at Progressive Field since they receive a 12% boost to their home run production. On the other side of the ledger, pitchers who are facing a right-handed dominant lineup should get greater consideration for daily baseball usage than usual as a result of the 12% bump to righty batter's strikeout totals. Pitchers who demonstrate a fly ball tendency carry a bit of extra risk since right-handed batters, too, receive a nudge upwards in the homer department (4%).

Yan Gomes was a decent pitch framer last season, and since he played 126 games at catcher last year (121 starts), he'll be out there often getting the borderline calls for his hurlers. His backup, Roberto Perez, was respectable finishing in the top half of pitch framers. A high-upside rotation will get the benefit of not losing close pitches as a result of their battery mates.

Who will be the fourth and fifth starters?

It's probably safe to write Danny Salazar's name in the rotation in pen. The all-right-handed rotation could round things out with southpaw T.J. House. The lefty made 19 appearances (18 starts) and managed a 3.69 FIP last year. Salazar's upside exceeds that of House, and his ability to miss bats with a high-octane arsenal would make him a daily gamer's favorite. Zach McAllister will also get a crack at winning a rotation gig, but his ticket appears to punched for the bullpen. Josh Tomlin and Bruce Chen are two more pitchers who will get a look in spring training, but neither is likely to start for the Indians at the beginning of the season.

Will Francisco Lindor break camp with the team?

The short answer is probably not. Baseball's arbitration and contract rules, as they're currently constructed, provide incentive to teams to wait on promoting their top prospects to the majors. Unfortunately, that means if Francisco Lindor is only slightly better than Jose Ramirez, he'll open the year in the minors. More seasoning won't hurt Lindor, and his value to the Indians is principally his glove. He does offer some promise with his bat and his base stealing ability, though. At a bad offensive position like shortstop, he could have daily fantasy punt value when he reaches the majors this year.

Michael Bourn battled injuries last year and had his second straight poor base stealing season, and as a player whose value is tied to his legs, he'll need to recapture his former base stealing prowess to really get daily gamers' attention. Hitting leadoff will at least put him on the radar when the Indians face a bad right-handed pitcher, especially if Bourn is cheap. He's not a player gamers should be trampling over one another to roster.

Jason Kipnis followed a good 2012 season with a breakout performance in 2013, and then he face planted last year. On the bright side of things, he did steal 22 bases. His batting average, on-base percentage and power cratered, though. He'll be 28-years old by Opening Day, so he's plenty young enough to bounce back. If he struggles early, his cushy spot in the two-hole could be in jeopardy.

Michael Brantley is the best hitter in the Indians' lineup. Last year was a career year for the outfielder, and he'll need to prove his newly found power is legit. The increase to his flyball and home run average distance suggests the new thump is at least partly legit. He makes a ton of contact, hits in a great spot for run production, works walks and is a capable base stealer. Brantley is one of the better daily baseball options in the outfield.

The switch-hitting Carlos Santana led the league in walk rate (17.1%), which makes him a relatively safe bet to tally points via ball four. His .196 ISO was the best he's posted since 2011, and hitting cleanup will award him run production opportunities aplenty. Santana isn't in the upper echelon of first basemen, but he's in the cut below.

Brandon Moss is a terror for right-handed pitchers, but the lefty was frequently platooned and sat against the top lefties as a member of the A's. Moss underwent hip surgery last fall, so he'll need to prove his health before being leaned on heavily. The power hitter is already playing in spring training games, so that's positive news on the injury front.

Yan Gomes is one of the best catchers in the league, and that extends to his offense. His 121 wRC+ was the third highest among qualified catchers last year. He doesn't walk much, but that's basically the only blemish in his hitting profile. He and Moss should flip flop in the projected batting order when a southpaw toes the rubber against the Indians.

Nick Swisher had offseason surgery on both of his knees and is behind the pace Moss is on. He's also coming off an ugly offensive season and shouldn't be trusted early in the year. Lonnie Chisenhall, on the other hand, is coming off his best offensive campaign of his young career. The former highly touted prospect set new offensive career highs across the board. He still isn't a very good play against left-handed pitchers, but he should be a bargain play against right-handed pitchers when daily gamers are looking to save a little coin without completely sacrificing production. 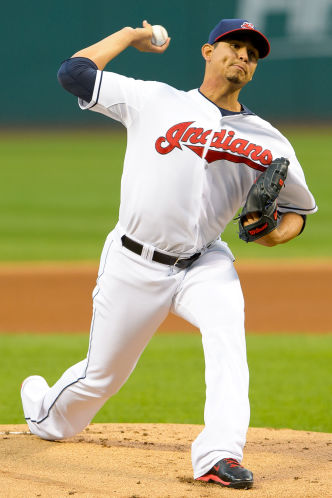 Corey Kluber, the 2014 American League Cy Young Award winner, headlines a punch-out-happy rotation. The right-handed stud ranked third among qualified starters in strikeout percentage (28.3%) and second in FIP (2.35). If you wonder what an ace looks like, this is it.

Floyd was ostensibly the number two, according to the team's website, but another elbow injury could sideline him for the entire season. Even if he's able to recover and pitch this year, he'll have to prove he can pitch at the highest level after missing significant time with two elbow injuries.

Carlos Carrasco could be the 2015 version of Corey Kluber. The well traveled former blue-chip prospect was demoted to the bullpen during the 2014 season before coming on strong down the stretch. As a starter he pitched 91.0 innings with a 28.1% K and 5.6% BB. His FIP as a starter was a miniscule 2.21. He's a burgeoning ace who might not be priced like one to open the year. Carrasco is one of my favorite pitchers for the 2015 season.

Bauer, the former third overall pick in the MLB Amateur Draft, finally flashed some of the potential that got him drafted so high. He can miss bats, but the reason to be optimistic about his future is his paring down of his walk rate last season. Further reason for excitement can be found in his PITCHf/x data at Brooks Baseball. According to them, his four-seam fastball average 94.94 mph, 1.33 mph faster than his previous best average four-seam fastball velocity which was recorded in 2012. Velocity coincides nicely with strikeouts, and the extra ticks should help Bauer blow away the competition. His spotty control will result in the occasional clunker, but his strikeout potential makes him a GPP play for his high ceiling.

Fantasy gamers should be thrilled that Salazar should have a spot in the rotation nailed down. He struck out more than a quarter of the batters he faced last year, and his power arsenal lends itself to continued success retiring batters by strike three. The long ball could bite him on the butt on occasion, but otherwise Salazar looks like a good daily baseball option in cash games and GPPs.

Moss's recovery from hip surgery could have netted him the down arrow, but I'm inclined to believe his health won't be an issue. Instead, I'm focused on his change of ballpark. The O. Co Oakland Coliseum has a left-handed batter park factor for homers of 82. He'll be getting a 30% boost in homer park factor in his new digs. Moss's dingers could be on the rise this year.

Swisher's poor season coupled with coming off of knee surgery on each knee is plenty of motivation to net him the down arrow. A case could be made for Bourn -- a strong one at that -- but Swisher hits lower in the order. Make him show some signs of regaining his past offensive form before using him in daily games.

Right-handed pitchers who have a big platoon split that favors their same-handed counterparts aren't going to enjoy facing the Indians. Five left-handed batters and three switch-hitters currently project as starters, and that makes for some enticing stack potential against right-handed pitchers who struggle with lefties. Southpaws, however, could make for a nice option against the Indians, namely if some of their hitters such as Bourn, Kipnis, and Swisher fail to rebound.

The rotation is a tantalizing mix. Only one projected member of the rotation had a strikeout rate under 20%, and three starters struck out more than a quarter of the batters they faced. Gamers playing at sites that reward strikeouts greatly, such as DraftKings and DraftDay, will want to take notice and go to the well often for Indians' hurlers.