The Kansas City Royals went to the World Series, but they didn't win the American League Central last year. That distinction belongs to the Tigers. Their key pieces are a year older, and they're without Max Scherzer, but this is a very talented team that daily baseball gamers will pick players from regularly.

Hitters aren't getting much extra help reaching the seats at Comerica Park. It's literally a neutral park for homers for lefties, and aids righties by a whopping 3%. Having said that, right-handed batters look like a nifty play in the Motor City thanks to a 10% uptick in doubles/triples and a 12% pick-me-up to runs scored. Even when right-handed batters hammer the ball into the ground they're receiving a 10% boost in reaching base by hit or error.

Don't expect Alex Avila or Bryan Holaday to receive any Rolex watches from their hurlers for their work behind the dish. Both are poor pitch framers. For the studs in the rotation, that won't mean much, but the fringe arms get docked value in daily baseball.

Who hits in the two-hole?

This job could be a revolving door, and I'd hazard a guess that Ian Kinsler hits second versus southpaws with reserve outfielder Rajai Davis starting in center field and hitting leadoff. Against right-handed pitchers, things get dicier to project. Avila's on-base skills against right-handed pitchers make him a candidate to hit there, but as a catcher, he's slow footed and not the ideal fit. Power-hitting outfielder Yoenis Cespedes has the athleticism to hit second, but lacks the on-base skills. Furthermore, his power would be a better fit down in the order where he can drive in the hitters on base in front of him.

Gose's defensive skills will result in the offensive bar being set extremely low for him to win the lion's share of playing time in center field. He'll probably platoon with Davis. In that scenario Gose would be on the heavy side of the platoon facing right-handed pitchers with Davis getting starts against southpaws. The former Blue Jay won't have much daily baseball value if he hits and remains at the bottom of the order all year, but if he ascends to the top of the order, then his value would get a shot in the arm.

The leadoff spot is likely to be filled by a couple players. Kinsler should hit there the majority of the time, namely when the Tigers face right-handed pitchers. Bench outfielder Davis is a strong bet to hit there versus southpaws. Kinsler is one of the better offensive players at the keystone. His lineup spot will award him big time run scoring upside. He's a slightly below average hitter against right-handed pitchers, but relative to his peers at second base he's solid. Kinsler is a great play against southpaws (he's tied for third among qualified second basemen in wRC+ versus lefties since 2012), and he'll probably hit second for the club when they play against one. In a perfect world, Gose's hitting skills take a leap forward and he moves up to either the leadoff spot -- allowing Kinsler to hit second -- or to the two-hole himself.

Avila's value is largely tied to his lineup spot. Hitting second against righties would be a boon for his daily fantasy value, but hitting in the bottom third of the order would make him a punt play at best. He's a non-option against southpaws.

Miguel Cabrera underwent ankle surgery in late October, but he's already fielding ground balls and projects to be ready by or near Opening Day. Simply put, he's arguably the best hitter in the game. Since 2012, his 168 wRC+ is second only to Mike Trout's 170 mark among qualified hitters. He's nearly equally awesome against lefties and righties, and if the Tigers' offense remains very good, he'll be a big ticket item worth spending on frequently.

Victor Martinez is coming off a career best year as a 35-year old. He's also recovering from knee surgery. The switch-hitter is already taking batting practice and should be ready around Opening Day, but it would be wise to expect less production this year. He's not a great player to roster early since his salary will reflect his production from 2014. The former catcher is a superb hitter even after factoring in regression, though, so once his cost settles in at a fair price point, he'll be in the daily mix.

The five and six spots in the order should belong to J.D. Martinez and offseason acquisition Cespedes. Whoever hits fifth will have slightly more value, but both spots will provide RBI potential hitting behind OBP-stalwarts Cabrera and V-Mart. J.D. Martinez breakout was partly fueled by a .389 BABIP that will surely regress, but his power looks mostly real. Cespedes is a decent offensive player when facing right-handed pitchers, but the optimal time to roster him is when he's facing a southpaw.

Skipping the seventh and eighth spots momentarily, Jose Iglesias is a glove-only player who is a non-factor with the lumber in his hands. Gose's value has been dissected, leaving Nick Castellanos to analyze. The third baseman turned outfielder turned back to a third baseman had a respectable rookie season totaling a 94 wRC+. His hitting skills made him a highly touted prospect, so growth at the dish is highly likely. Castellanos' lineup spot isn't ideal, but if he does improve as a hitter like I expect, he'll have bargain bin value until his cost catches up to his new level of production. 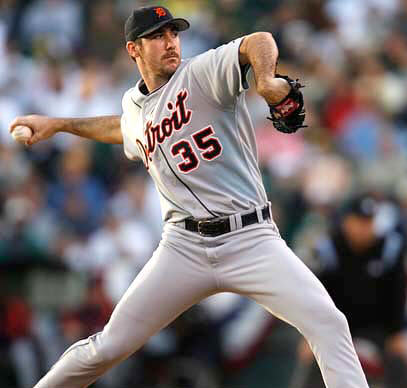 From an underlying statistics perspective, David Price didn't skip a beat when he was dealt from the Rays to the Tigers. In fact, his FIP went down from 2.93 as a member of the Rays to 2.44 with the Tigers despite his ERA rising from 3.11 to 3.59. After a down season in the strikeout department in 2013, Price set a new career high in strikeout rate in 2014. He's an ace who is backed by what should be a very good offense. The price will be high to use him, but he'll regularly be worth it.

Justin Verlander's slide from elite pitcher to an also-ran picked up speed last year. It was the first season in which his ERA was above 4.00 since 2008. The veteran's 3.74 FIP indicates some bad luck probably played a role, but it can't explain away everything.

The only skill Anibal Sanchez lacks when compared to the best arms in the game is staying healthy. Sanchez has never reached the 200 innings pitched mark, and after a three year run of besting 30 starts from 2010-2012, last year was his second in a row falling short of that plateau. In the world of daily baseball, his missed time isn't overly concerning since you won't be starting him when he's on the disabled list. Sanchez's 27.1% K from 2013 is an outlier, but settling in around the 20% mark is very reasonable. Think of Sanchez as an undercover-stud pitcher when he's healthy, and use him accordingly.

Alfredo Simon's All-Star selection last year was an out-of-nowhere emergence. He struggled mightily in the second half last year and his underlying statistics don't support continued success. He's followed in the rotation by Shane Greene. Greene was netted in a three-team deal and has some enticing stats. His strikeout rate is juicy (23.5% K) and pairs nicely with a 50.2% ground ball rate, per FanGraphs. The biggest knock on Greene, and it's a valid one, is his struggles with left-handed batters. Last year, his only in the majors, he allowed a .345 wOBA to lefties. When he faces a right-handed heavy lineup he'll be a great play. Conversely, when he faces a left-handed heavy lineup he's best to be left unrostered until he proves capable of making advancements retiring lefties.

The odds are against Verlander rebounding to his AL Cy Young Award form at the age of 32. He won't need to in order to have daily baseball value, though. Give Verlander a partial pass for last year. He struggled to recover from core muscle repair surgery. A healthy and normal offseason improve Verlander's outlook. Monitor his early season velocity. If his fastball is back to humming over 94 mph on average as it was in 2013, a similar-ish season is a reasonable floor.

I already alluded to Simon being a poor option this year, but now I'll expand on that. His 3.44 ERA was lower than all of his ERA estimators last season. His 15.5% K was substantially lower than what FanGraphs had as the league average (20.4% K). A move from the National League to the American League will create another hurdle for Simon to clear if he hopes to be a usable daily baseball option.

The health of heart of the order hitters Cabrera and V-Mart will dictate just how good the daily baseball outlook is for this offense. Since both are on pace to start the year in the lineup, the outlook is bright. There is length to the lineup, with only the eighth and ninth hitters, Gose and Iglesias, looking like non-options in fantasy. When the Tigers face a southpaw this year there is big stack potential.

The rotation has one workhorse stud, Price, and one under the radar stud, Sanchez. Verlander could make it three regulars on daily baseball rosters if his good health results in, well, results. Greene needs an ideal situation to be useful, but he's in the daily game mix. Simon is the only starter who looks like a long shot to help gamers this season.