Acknowledging a sorting error, the previous team previews are being edited to accurately reflect pitch framing grades on a per game basis as opposed to total value.

The Astros won 70 games last year and this would be another step in the right direction. A couple of starting pitchers emerged last year as solid foundation pieces and the offense added some punch through offseason deals. This is a team on the rise, and their daily baseball value follows suit.

Minute Maid Park is a homer haven amplifying long balls to lefties 20% and 14% for righties. Right-handed batters also get a lift in doubles/triples by 12%. The run scoring is neutral for right-handed batters and up only 4% for lefties, but this will be a popular venue for using sluggers in daily baseball games. Beware of starting fly-ball pitchers here.

Mike Fast, a former member of the Baseball Prospectus staff who now works for the Astros, was one of the first people I ever saw covering pitch framing by catchers. It should come as little surprise that the club employing him has two talented pitch framers in Jason Castro and Hank Conger. In fact, Conger was the best in the business last season on a per game basis. This duo will help the pitchers immensely with picking up strikes on borderline pitches.

Will Jon Singleton make the team?

Jon Singleton was a celebrated prospect who was acquired in the Hunter Pence trade during the summer of 2011. He dealt with a suspension for testing positive for marijuana use, but otherwise, Singleton's time in the minors was good. The patient first baseman with above average power did what good hitters are supposed to do in the Pacific Coast League, and that's hit. Last year he struggled in 362 plate appearances in the majors with a 37.0% K and a 79 wRC+. He did, however, retain his patience with a 13.8% BB. He'll need a good showing in the spring to make the roster, as the team could opt to play Chris Carter at first base, Evan Gattis at designated hitter and use a stronger defender in left field.

Who is hitting where in the heart of the order?

George Springer, Carter and Gattis should hit in the 3-through-5 spots in the order, but where each hits is subject to debate. All have daily fantasy value, but the hitters who slot third and cleanup will be slightly more valuable than the player who draws the short straw and hits fifth. The Astros could opt to mix their lineup up frequently depending on the pitching matchup since their four best hitters are right-handed. Regardless, it's tough to imagine the team veering from the trio of Springer, Carter and Gattis in the heart of the order. 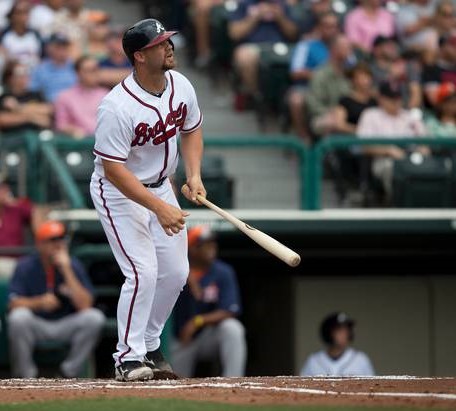 Jose Altuve led MLB in batting average with a .341 mark last season. He makes a ton of contact with an itty bitty 7.5% K. Power isn't a big part of his game, but a .112 ISO and seven homers aren't negligible totals for a middle infielder. He's a great base stealer and his 56 stolen bases in 2014 were tied for the second most in the majors. The diminutive second baseman is one of the best offensive options at the keystone, and he's especially good against left-handed pitchers ranking first among qualified second basemen in wRC+ (144) since 2012. He's viable in daily games most days and a great play when facing southpaws.

The second spot in the lineup is represented by Luis Valbuena above, but the truth is, this could be a revolving door. Whoever hits second will get an instant value boost as a result of not hitting lower in the order. Valbuena is a poor hitter when facing same-handed counterparts (southpaws), but he's an above average hitter since 2012 versus right-handed pitchers. When he slots second, he'll have some bargain value in daily games facing average or worse right-handed pitchers.

Springer belted 20 homers and tallied a .237 ISO in only 345 plate appearances last season. His power comes at a cost, though, as he had a 33.0% K. When Springer faces a high strikeout pitcher, he might not be the wisest choice. He'll be a great play against pitchers who struggle to miss bats, though.

Carter had a full blown breakout last year. The 37 round-trippers he hit tied with Giancarlo Stanton for the second most in the majors. The .264 ISO he managed tied Jose Abreu for the fourth best mark. Power is Carter's game, and it helps make up for a 31.8% K and a poor batting average (.227 last year).

Gattis is another big bopper. He'll be turning in the tools of ignorance for an outfielder's mitt with the Astros. If he falters in the outfield, the designated hitter role could be his -- an option not awarded to him in the National League with the Braves last season -- making him an everyday player now. Gattis didn't play enough to be a qualified hitter, but among hitter who received a minimum of 400 plate appearances he ranked tied for 14th in ISO (.230). The right-handed batter will get a 7% homer park factor boost leaving Atlanta and playing for Houston.

Colby Rasmus -- like many of his peers in this lineup -- has above average power that comes with a high strikeout rate. The center fielder had a 33.0% K last year but hit the ball with authority when he did get wood on it totaling a .223 ISO. Last year was the first his strikeout rate ballooned above 30%, so there is hope he'll reduce it to a more acceptable rate in the upper-20% range. You won't want to use him against southpaws, but he's an above average hitter against right-handed pitchers who should be modestly priced.

Jed Lowrie could end up a victim of his ability to switch-hit. He fits the bill of what makes for a good number-two hitter, but he could hit down order in an attempt to break up some of the left-handed batters (even though he'll usually hit left-handed himself). If he does hit second, his value will get a big lift. Even down order, his offense rates favorably when stacked up against other shortstops, and he'll be a daily baseball consideration regularly.

Jason Castro followed up a strong 2013 season (129 wRC+) with a clunker in 2014 (84 wRC+). His walk rate dipped while his strikeout rate swelled, and his line drive rate dropped under 20% for the first time in his career. Finding a happy medium between his very good 2013 season and his ugly 2014 season would be plenty to get him in the catcher mix in daily games.

Scott Feldman is the staff ace in name only. He's not the best pitcher in the Astros rotation. The veteran is probably the third most valuable starter at best. The 32-year old doesn't miss enough bats to have value most of the time at DraftKings, but he could be a bottom of the barrel starter in FanDuel games when the Astros are big favorites and he's starting.

Dallas Keuchel was one of the more surprising breakout pitchers last year. He wasn't a huge strikeout pitcher with an 18.1% K (league average was 20.4%, according to FanGraphs), but his rate isn't so bad he should be immediately removed from DraftKings consideration. He rarely walked batters (5.9% BB) and led qualified pitchers in ground ball rate (63.5%). The southpaw's ability to coax worm burners makes him an option in all ballparks, regardless of park factor for homers.

Collin McHugh's breakout might have been even more shocking than Keuchel's. An increase to his velocity deserves some credit when discussing his breakout. His fourseam fastball had an average velocity of 92.40 mph in 2014 compared to 90.99 mph in 2013, per Brooks Baseball. It wasn't the only reason he made huge strides, though. He mostly scrapped a bad sinker and leaned heavily on his breaking balls (23.29% curve ball usage and 31.49% usage of his slider). His breakers both missed bats at a rate in excess of 13% and helped fuel a very good 25.4% K. McHugh is a good daily game pitcher as long as he retains his added velocity and continues to have success with a breaking ball heavy pitch mix.

Brett Oberholtzer isn't very good. The lefty's 3.56 FIP suggests he was a little unlucky last year (4.39 ERA), but he had some good fortune keeping the ball in the yard which is reflected best by his 4.25 xFIP. The 25-year old lives in the strike zone with pedestrian stuff. He's not really an option in daily games, but using hitters against him could prove to be a decision that yields a positive return.

Dan Straily shouldn't be used by gamers early in the season, but he could develop into a tournament option as the season marches along. Last year he managed an 11.5% swinging strike rate that helped him strike out 20.4% of the batters he faced. His slider and changeup are true put-away pitches with whiff rates of 21.70% and 18.03%, respectively. Fine tuning his control will be integral in him turning a corner.

Springer's five stolen bases are a poor reflection of his speed. The young outfielder stole 45 bases between Double-A and Triple-A in 2013. More stolen bases will help Springer's daily game value. That's not the only reason he gets the up arrow, though, spending the whole season in the majors is an obvious reason to like him more this year.

From a strictly hitting standpoint, Gattis' value would be considered on the rise. As I alluded to above, however, he will be losing catcher eligibility in his new home. Going from the thinner position of catcher to the deep pool of talent in the outfield can only be viewed as damaging his daily game value.

The Astros have a real life GPP lineup. It's a boom-or-bust collection of talent who -- with the exception of Altuve and Lowrie -- have contact problems that can be forgiven due to top shelf thump. Minute Maid Park will squeeze the most out of the value these boppers have. When the Astros face a left-handed pitcher, namely a bad one, the first five hitters present a nice group for stacking.

There isn't a fantasy ace in this rotation, but Keuchel and McHugh offer gamers a pair of above average pitchers. Keuchel will be usable most of the times he takes the hill, with the exception being when he faces a lineup that annihilates left-handed pitching. McHugh's low ground ball rate could leave him a bit homer prone at times, but his low walk rate and high strikeout rate will make him usable even in some matchup at a homer-friendly park such as his own. By season's end, Straily could join the lefty-righty duo of Keuchel and McHugh as a daily game pick.