The Los Angeles Angels of Anaheim won more games than any other club in 2014. Their offense is led by the best player in baseball, and their rotation had a couple of young starters step up and play at a high level. The core is back and prepared to put together another big season that daily gamers will surely benefit from.

The combination of Chris Iannetta and Drew Butera won't elicit excitement for their ability to work over umpires and steal strikes at an above average rate, but they aren't dreadful either. The needle isn't moved significantly one way or the other for the starting pitchers on this staff as the result of the glove work of the catchers.

Who will start at second base?

Howie Kendrick was shipped out of town and a fierce battle to fill his shoes is commencing this spring between Josh Rutledge, Taylor Featherston, Johnny Giavotella and Grant Green. Rutledge is listed atop the depth chart on the team's official website, but the job hasn't been won yet. Featherston looks like the longest shot to win the job, so we'll ignore him. The trio of Rutledge, Giavotella and Green have all hit in Triple-A but underwhelmed at the highest level. Of the bunch, Rutledge has had the most success in the majors, but none project to be more than matchup based long shots in daily games.

Who wins the fifth starter competition?

The winner of the fifth starter job will probably have fantasy value. The depthchart on the Angels' website lists Hector Santiago ahead of Andrew Heaney and Nick Tropeano, but the returning lefty is the least intriguing pitcher of the trio. Heaney is a left-handed pitcher who grades out highly as a prospect. Homers killed him in his 29.1 inning debut last year, but his 9.6% swinging strike rate, per FanGraphs (9.4% league average in 2014), points to his strikeout upside. Tropeano has a lower ceiling but could emerge as an average pitcher. An average pitcher -- something Santiago is capable of being -- will have value in FanDuel games backed by an offense that will help the Angels pile up wins by the bunches this season. 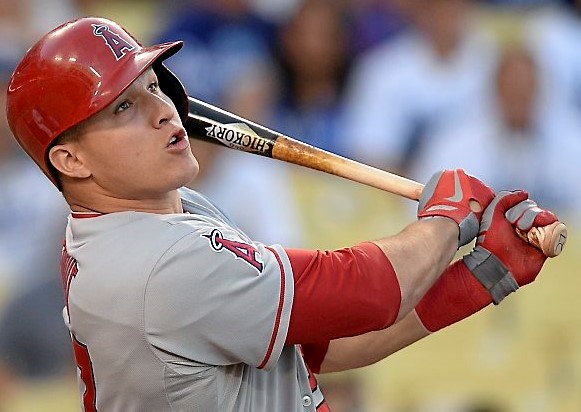 Kole Calhoun validated his somewhat surprising 127 wRC+ in 222 plate appearances as a rookie in 2013 with a 125 wRC+ in his sophomore campaign. He provides stability at the top of the order hitting well against pitchers of either handedness. He's a better play against right-handed pitchers than lefties since he hits for more power against righties, but he's still in play against southpaws as a result of his own hitting skills and the well above average hitting abilities of the three hitters directly behind him.

Erick Aybar is a switch-hitting shortstop with a cushy lineup slot. He hovers around average offensively against lefties (slightly above) and righties (slightly below), and since shortstop lacks sizzle with the stick, average plays. Oh, and hitting behind a decent leadoff hitter and in front of the best player in MLB isn't bad either.

Mike Trout is a stud. A once in a lifetime type of talent. No qualified hitter has a higher wRC+ than Trout's since 2012 versus right-handed pitchers and he ranks 11th in wRC+ versus lefties in that time frame. Ha. Good luck getting him out, opposing pitchers. Trout has the upside to be the highest scoring player in daily games every night the Angels play.

Albert Pujols is a shell of his peak self, but he has a Hall of Fame resume, so that's okay. Pujols is no longer in the top tier of first basemen, but he's still an above average hitter who slots behind all-world superstar Mike Trout. Fans of advanced baseball stats know RBI are a terrible stat for measuring a player's value, but in the daily baseball world they matter, and Pujols will have plenty of ducks on the pond as a cleanup hitter.

Matt Joyce will take his platoon talents from the Rays to the Angels this year. He'll ride the pine in favor of Collin Cowgill when a lefty takes the hill (117 wRC+ versus lefties since 2012). The platoon should yield two above average hitters -- at least when facing the handed pitcher they excel against -- who will often be cheap to roster. Joyce will be in the catbird seat to drive in some runs hitting fifth, but expect Cowgill to drop in the order when he starts.

David Freese's offense is on a slippery slope. He hasn't slipped up when facing southpaws, though. Freese has posted wRC+ marks of 142, 126 and 153 in 2012, 2013 and 2014, respectively. Behind him is young power-hitter C.J. Cron. Cron walks at a low rate and doesn't offset it with a low strikeout rate, and he'll be streaky as a result of his plate discipline. He is an appealing player thanks to big raw power. Scouting reports lauded his thump as a prospect. Cron's big league success against lefties lines up favorably with his minor league work. Since 2011 he has 369 plate appearances in the minors against southpaws and a .215 ISO to show in them, per Minor League Central.

Chris Iannetta has fared well over the last three years after exiting the thin air of Colorado. He walks a ton (14.7% since 2012) and packs a little punch (.148 ISO since 2012). The combo works at catcher, and his prowess for punishing lefties makes him a great play when a southpaw toes the rubber.

Jered Weaver's days of voodoo magic and beating his FIP could be coming to a close. Okay, that's probably overstating things, but he's no longer the front of the rotation starter he once was. His velocity is continuing a nose dive, and despite putting on weight this offseason, he's reportedly lost even more velo. Avoid him early in the season and see how well he's able to pitch with even further diminished stuff.

Garrett Richards figured it out last year, and it was a thing of beauty. His high-octane arsenal led to him punching out nearly one-quarter of the batters he faced, and when they put the ball in play they did so on the ground 50.9% of the time. The 26-year-old pitcher is blossoming into a fantasy star right before our eyes.

Matt Shoemaker's 2014 season was a pleasant surprise for fantasy gamers and the Angels. It also wasn't a fluke if you dig into his numbers. He'll be a great daily baseball pitching choice this year.

Shoemaker paired an excellent strikeout rate with a damn good 4.4% BB. His juicy strikeout rate was validated by a 10.7% swinging strike rate. Shoemaker was death on right-handed batters holding them to a .271 wOBA, but he was no slouch against lefties, either, keeping them in check to the tune of a .308 wOBA. He'll pick up more starts and innings this year opening the season in the rotation, and those extra starts will be welcomed with open arms by daily gamers.

Freese's offense was depressed for a second straight season. In 2011, he managed a 123 wRC+ and followed up with a 132 wRC+ in 2012. The last two years, he's managed a 105 wRC+ and 106 wRC+ in 2013 and 2014, respectively. His overall offensive output has been propped up by his annihilation of lefties. He's been a below average hitter against right-handed pitchers in consecutive years and shouldn't be used against them in daily games.

The Angels offense has some unique stack options. Assuming Freese and Cron each move up a spot in the order when a lefty is on the hill, 2-through-6 in the order will all represent above average hitters against lefties. Against right-handed pitchers 3-through-5 make up a nice mini-stack. Overall, every position except second base presents daily gamers an option in their contests.

The idea of two ships passing in the night comes to mind with this rotation. In this case, it's four ships with Weaver's and Wilson's value heading south while Richards' and Shoemaker's value is heading north. That said, even the less desirable starters in the rotation will make for usable picks in FanDuel games when the Angels are big betting favorites.