The Twins are projected to win the lowest number of games of the teams preview thus far. This serves as a great time to remind daily baseball folks that even the worst teams in baseball can provide valuable options when the matchups are right, and the Twins are no exception. They lack high end talent who can carry daily teams, but Minnesota does have some talent who can prove to be bargain choices sprinkled up and down the roster.

Despite hampering home run production (9% for lefties and righties), Target Field actually boosts run scoring (6% for left-handed batters and 5% for righties). Those gamers who aren't intimately familiar with park factors may immediately label Target Field as a "pitcher's park" because of the reduced homer production. You're reading this, though, and know better. Overall, though, the Twins' home ballpark plays close enough to neutral that gamers shouldn't go out of their way to load up on hitters or start pitchers specifically due to a game being at Target Field.

The duo of Kurt Suzuki and Josmil Pinto is a nightmare for pitchers who live on the fringes of the strike zone. Simply put, as two of the worst pitch framers in baseball last season pitchers are not going to get close strikes throwing to them. There is hope for a little better work from Suzuki, though, since he ranked 60/78 catchers in 2013. Regardless, Suzuki isn't an asset for daily gamers looking to use a starter from the Twins.

Who will start in center field?

Aaron Hicks is the prohibitive favorite to start in center field, but his past struggles provide reason to speculate on his ability to sew the job up. He'll be pressed by Jordan Schafer. Neither player is likely to have much daily value, unless of course Hicks takes a sizable step forward and begins to turn his plus tools into usable skills. Ultimately, current projected starting shortstop Danny Santana could supplant the two and open the shortstop position for Eduardo Escobar. Santana's value would take a big hit by losing shortstop eligibility if he moved to center field. By season's end, elite prospect Byron Buxton could get a taste of the bigs. Buxton's skill-set would instantly put him in the daily baseball discussion.

Tommy Milone is the frontrunner, but as many as four others could be in the mix (Trevor May, Alex Meyer, Mike Pelfrey and Tim Stauffer). Milone is the type of soft-tossing lefty who can pile up mediocre innings who will rarely crack daily baseball rosters. Prospects May and Meyer offer the most to dream on, with Meyer outranking May in terms of upside and prospect clout. Each will require time to settle in at the big league level, though, and would make for good targets to load hitters up against.

Joe Mauer's move from behind the plate to first base last season was crippling to his daily baseball value. First base is loaded with higher ceiling hitters, but Mauer has strong on-base and batting average skills that will make him a cash game option when his price is right and he has a favorable matchup. The other two hitters who comprise the top three, Santana and Brian Dozier, are above average hitters for the middle infield positions.

Dozier enjoyed a breakout season last year swatting 23 homers, stealing 21 bases and rounding out his contributions with 112 runs, 71 RBI and a .345 OBP. He's a great table setter thanks to his ability to work walks at a high rate (12.6%), but it's his power and speed combination that makes him a daily baseball darling. Dozier is at his best facing left-handed pitching and he should be rostered heavily when facing one.

The four through seven spots in the Twins' order could be shaken up regularly this year. Torii Hunter rejoins the organization that drafted him, and his ability to be an above average offensive player against lefties and righties makes him the ideal candidate to bat cleanup. He is 39-years old, so a cliff season isn't out of the question, though.

Kennys Vargas, the switch-hitting mountain of a man, road an unsustainable .340 BABIP to a 114 wRC+. He was a free swinger, walking in just 5.1% of his plate appearances, but his 10.6% walk rate at the Double-A level last year portend well to him toning down his hacking ways. Some ups and downs are to be expected from Vargas this season, but he's the owner of some enticing upside.

Oswaldo Arcia raked at every level of the minors, and his .201 ISO through 788 big league plate appearances speaks to his above average power. His 31.0% strikeout rate in his career also speaks to his biggest problem. Arcia has been slow adjusting to facing left-handed pitchers, not uncommon for a left-handed hitter, but he's already usable against right-handed pitchers. Kurt Suzuki and whoever starts in center field are non-factors in daily baseball. 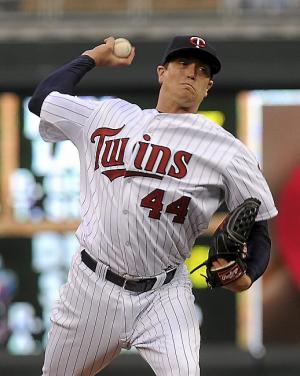 Phil Hughes was superb in his first season no longer donning Yankees' pinstripes. His 3.52 ERA was substantially higher than ERA estimators such as FIP, and his underlying statistics such as his 1.9% walk rate were excellent. Hughes ability to pound the strike zone will help him in dealing with his terrible pitch-framing battery mates. He'll be a very good daily baseball option as long as he's not playing at a homer-friendly venue (36.5% ground ball rate).

The Twins made an offseason splash inking Ervin Santana. They hope he'll be a better investment than their previous offseason signing, Ricky Nolasco. Santana is coming off a season in which he tallied the second highest strikeout percentage of his career (21.9%), but like Hughes, he's best used in homer-suppressing ballparks as a result of his low ground ball rate (42.7%).

Speaking of Nolasco, he was dreadful last year. Stop me if you've heard this one before, Nolasco's ERA was well above his ERA estimators. It's the story of his career. I expect him to rebound close to his career marks (4.48 ERA and 3.82 FIP), but the only reason to take note of when he's on the hill is to load up on hitters facing him.

Former first-round pick Kyle Gibson doesn't look like someone who daily gamers should be interested in on the surface, but there is talent hiding in this young pitcher. The PITCHf/x numbers related to his slider and changeup provide hope for Gibson making serious strides this year, as does his 3.80 FIP which bested his 4.47 ERA last year. He is a slick contrarian GPP pick early in the season before he proves he's better than his 4.47 ERA from a year ago would suggest.

Expanding on Gibson's breakout potential, he looks an awful lot like a right-handed version of Dallas Keuchel when you look under the hood. Gibson induced grounders on a gaudy 54.4% of the balls put in play against him last year, and according to Brooks Baseball's PITCHf/x data, all four of the pitches he threw coaxed a ground ball rate north of 47%. The 17.08% whiff rate he achieved throwing his slider last year gives him a put-away pitch to help him improve upon his strikeout rate. There is something percolating here beneath the surface with Gibson.

There are two major knocks against Santana this year. The first knock is that he's moving from the National League to the American League. According to Baseball-Reference, National League teams averaged a triple slash of .249/.312/.383 last year. Meanwhile, American League teams averaged a triple slash of .253/.316/.390. More troubling is that he trades Evan Gattis, (41/79 in pitch framing), Gerald Laird (74/79) and Christian Bethancourt (56/79) for the catching duo of Suzuki and Pinto. It's not as if he was throwing to above average pitch framers last year, but he is downgrading in that department.

Dozier is the closest thing the Twins have to a daily baseball star, and while he's very good, star would be a generous title. There's basically no stacking potential with this lineup in the beginning of the season. The club is young enough that that could change as the calendar turns during the season. Minor leaguers Buxton and Sano could provide a shot in the arm to the Twins' daily baseball value in the summer months, but for now, the lineup is a collection of glue guys and bargain picks.

The rotation could be quietly good. Hughes is an unsung fringe ace. Santana can miss bats. Gibson is a breakout candidate. Collectively, the trio of Hughes, Santana and Gibson give daily baseball gamers something to work with. The rest of the rotation could provide daily gamers different value, though. And by different value, I mean options to pile hitters up against.