Basically, the Yankees are projected to be a .500 team. Looking over the roster, there is some good and some bad. Sounds about right for a .500 squad. This expected win total does little in regard to defining the type of daily baseball value to be found on an aging Yankees squad.

Yankee Stadium is a great ballpark for hitting dingers at. Both lefties and righties enjoy a boost, 31% for lefties and 32% for righties, to their home run production when playing there. Even with the bump in homers, the park is roughly league average for run scoring. Pitchers who keep the ball on the ground are very much in play for daily fantasy purposes at Yankee Stadium since the homer park factors will impact them less than their fly-ball-centric peers.

This duo of catchers, chiefly Brian McCann, will help Yankees starters steal a few extra strikes with their framing skills. McCann's offense left a lot to be desired in his first season in pinstripes, but daily gamers will welcome him serving as the catching half of the battery if it helps the Yankees hurlers who are fantasy relevant. 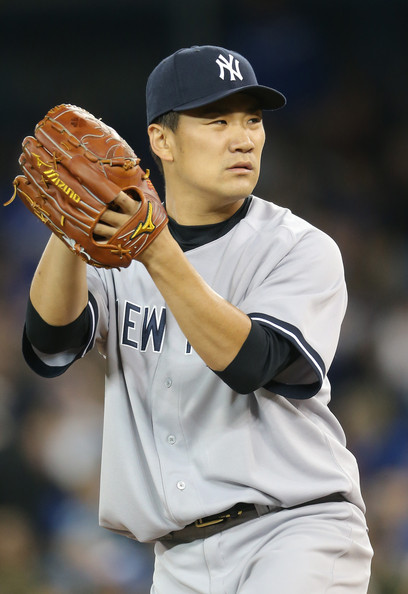 How will Masahiro Tanaka's elbow hold up?

This is a question that will linger with Masahiro Tanaka all season long. Well, that's unless of course his partially torn ulnar collateral ligament he rehabbed last season bothers him in the spring and necessitates Tommy John surgery. Tanaka was great as a rookie and can be a great daily fantasy baseball pitcher if he can avoid the need to go under the knife.

CC Sabathia was awful through eight starts, and then his season came to an end in the middle of May because of a knee injury that required surgery in late July. Sabathia will reportedly be wearing a knee brace this year in the hopes of providing knee support. I'm not a doctor, nor do I play one on television, so I won't speculate on the likelihood of his knee acting up this year. I am a fantasy expert, however, and I'll be monitoring radar gun readings in the spring. Sabathia's average four-seam fastball velocity was only 90.57 mph, per Brooks Baseball. His fastball velocity has been on the decline since 2011. If he can't find the missing ticks on his heater, he'll be a pinata ripe for beatings from opposing hitters.

This is an aging lineup. There is potential for some of these veterans, Carlos Beltran, Brian McCann and Mark Teixeira for instance, to rebound. Facing shifts really hurt McCann and Teixeira, and that's best reflected in their low BABIP last season. Both still have power and play in a home park that will aid it, making them GPP options for their home run potential, but they'll need to beat the shift more often in order to provide the consistency necessary to be cash game options

The projected top two hitters, Brett Gardner and Jacoby Ellsbury, figure to be useful in daily fantasy this year, Ellsbury more so than Gardner. The power outburst displayed by Gardner (career high 17 homers) should be taken with a grain of salt early in the year, but it's possible he's made real gains. His speed will net him fantasy points with stolen bases, and his lineup spot, leadoff, will result in a healthy run scored total. Ellsbury is the most talented Yankees' hitter. He possesses blazing speed which shows up in fantasy point scoring form of stolen bases and he swatted 16 homers with a .148 ISO last season, so he has a well rounded point scoring profile that will make him usable in all daily baseball scoring formats when the matchup is right.

The designated hitter role will be hotly contested. Alex Rodriguez is listed as the favorite, but Garrett Jones could just as easily be written in as the projected designated hitter. Since Rodriguez is a right-handed batter and Jones is a left-handed batter, it's easy to envision a platoon developing. It's also not out of the question Rodriguez face plants after a full season off due to a PED suspension. When both are going well, power is their calling cards. When power is your best offensive asset, Yankee Stadium helps make you a daily baseball option when the price and matchup are right.

Chase Headley's 2012 production is looking more like an outlier than a new benchmark. In his defense, he played through a variety of injuries that probably hampered his production. Finally freed from PETCO Park with a midseason deal, Headley's in a park that will award him daily fantasy value. He can swipe some bags, and there is a little thunder in his stick -- even if not the 31 homer power he showcased in 2012. The middle infielders who round out the lineup, Stephen Drew and Didi Gregorius, have a realistic ceiling of punt plays when the matchup is favorable, but they don't have steady daily baseball value.

The rotation, from a daily baseball perspective, is basically Tanaka and Michael Pineda, and everybody else. Tanaka is a legitimate daily fantasy stud if his elbow holds up, and Pineda is pretty damn good himself. After failing to throw a pitch at the major league level in 2012 or 2013 due to injury, Pineda was sharp earning a slightly lucky 1.89 ERA. His strikeout rate was down from his rookie season with the Mariners (24.9% with the Mariners and 20.3% last year), but he walked almost no one (2.4% walk rate). Pineda has the skills to be a regular in daily baseball lineups, but he'll need to stay healthy. He'll be best used away from Yankee Stadium since his 39.1% ground ball rate leaves him susceptible to serving up taters at home.

As I noted in the spring training section above, Sabathia will have to show he can recapture some of the zip he previously had on his heater in order to be useful in daily baseball. Chris Capuano split the season relieving and starting, and as a starter he totaled a 3.85 FIP. As a soft-tossing lefty his room for error is slim, and I'm skeptical of him repeating his production. Nathan Eovaldi's FIP paints a more favorable picture of his abilities than it should. The former Marlin throws very hard, but his below average changeup presents him problems getting left-handed batters out (.336 wOBA allowed to lefties last year).

Beltran underwent offseason elbow surgery for a bone spur and loose bodies in his elbow, and he's reportedly feeling good now. A healthy Beltran should play much better than he did gutting the injury out in year one with the Bronx Bombers. His switch-hitting should assure him a spot in the heart of the order. Beltran is probably going to be priced cheaply early in the season as a result of his poor showing last year, making him a thrifty daily baseball option while he re-establishes himself as an above average hitter.

McCann's power is just fine, but a .232 batting average and .286 on-base percentage aren't going to cut it. His propensity for pulling groundballs to the right-side of the infield prompted opponents to shift heavily against him, and the results indicate they made the right decision. Until McCann proves capable of going the other way to beat the shift, he can't be relied on in cash games. He can, however, be used in GPPs because of his above average power.

There is modest mini-stack upside with the first three hitters in the order when a right-handed pitcher takes the hill. Aging power hitters could play themselves onto GPP rosters, and a healthy Headley should be good enough to be in the mix at the hot corner. It's not an exciting offense, but there is some daily fantasy value to be mined from this lineup.

The top of the rotation will be useful, and in the case of Tanaka, very useful in daily baseball. The rest of the rotation's upside is limited. Reiterating Eovaldi's struggles with left-handed batters, he'll make for a great candidate to stack against. Capuano was very good against right-handed batters last year (.295 wOBA allowed), but from 2011-2013 they battered him (.343 wOBA). Fill your lineups with right-handed batters against Capuano next year until he proves his skills against them are legitimate and not a one year fluke.