The A's reached the postseason as one of the wild card teams and were promptly dismissed in a comeback victory by the eventual American League Champion Kansas City Royals. They've since blown up last year's squad and retooled with a very different roster. One thing remains constant, the A's will feature some interesting platoons and should be an above average team as their projected win total suggests.

Boppers beware, left-handed batters are docked 18% on homers and right-handed batters have a 13% more difficult time reaching the seats at the O.Co. Coliseum than at a neutral park. Oakland will be a popular venue for using pitchers due to an 8% suppression of runs to left-handed batters and just a 1% boost for run scoring to righties. Line drive hitters whose power is largely of the doubles and triples variety will see their stock up significantly in Oakland as the table shows.

Stephen Vogt was used in a utility role for the A's after his promotion to the majors, and as a result he didn't catch 1,000 pitches. He did catch 698, though, and showed off above average pitch framing skills on a small sample. Josh Phegley was with the White Sox and didn't catch enough to qualify, but his limited work was ugly. The Athletics' starters will be more appealing with Vogt catching than Phegley doing so.

Drew Pomeranz looks like the favorite to win the fifth starter job, but he'll have competition. Kendall Graveman and Chris Bassitt are in the mix, too. The winner will call a great pitcher's park home, so it's a fifth starter battle worth monitoring. Pomeranz is the most intriguing of the trio after making 10 starts for the team last year and totaling a 3.67 FIP with a juicy 23.6% K. Eventually, probably June, rehabbing starters Jarrod Parker and A.J. Griffin will be healthy enough to press for a rotation gig. 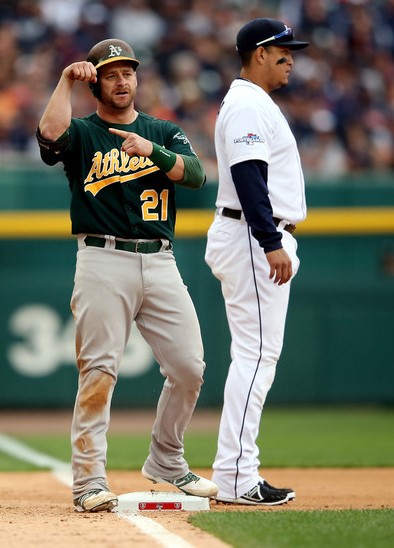 Vogt will probably start at catcher, but his versatility in the field could provide manager Bob Melvin some food for thought. Unless they bring in another catcher, though, it is Vogt's job to lose as one of only two catchers on the 40-man roster with big league experience. The third catcher on the 40-man roster, Philip Pohl, struggled to hit in the low minors and has only 31 plate appearances in the upper minors.

Switch-hitting Coco Crisp leads things off as one of just a handful of players who can be counted on as an everyday option for Melvin. Of course, that doesn't mean he should be in daily lineups every day. He's a below average hitter against left-handed pitchers and should be avoided when he faces most southpaws. He has, however, been 22% better than the average hitter when facing a right-handed pitcher. The speedy outfielder doesn't derive much of his fantasy value from clearing the fences, so his home ballpark won't hurt his daily game stock much.

Ben Zobrist makes it two switch-hitters in the top two spots in the order. The former Ray could open the year in right field, but when the team is fully healthy second base is where he appears to help the team the most. Unlike Crisp, Zobrist is useful against left-handed and right-handed pitchers alike. His outstanding plate discipline manifests itself in a high walk rate (11.5% last year) and high OBP (.354 last year and for his career). His power and speed are mediocre -- limiting his ceiling -- but his OBP skills and run production potential as the number-two hitter make him a daily game option at second base. You can do better than Zobrist in the outfield, though.

Josh Reddick has suffered a strained oblique and will be sidelined early in the season, hence Zobrist could begin the year in right field. When Reddick is healthy, he's a unique player with a reverse platoon split. In other words, the right-handed batter is actually better against right-handed pitchers than when facing southpaws. Players who have reverse splits can make for sneaky plays in daily games as non-astute gamers will overlook them when putting together lineups. Reddick relies on power for daily fantasy value making him a better pick when he is on the road at a homer-friendly park.

Billy Butler is a member of an organization other than the Royals for the first time in his career. The bat-only Butler is coming off his worst season since his second in the league (2008). At 28-years old (he turns 29 in April) the A's are banking on a bounce back, but as a slow footed hitter with old man skills it's not a guarantee he will. For now, Butler is best reserved for usage against left-handed pitchers, against whom he still managed an outstanding 137 wRC+ in 2014.

Ike Davis becomes the newest member of the A's first base platoon. While I'm not responsible for filling out the lineup card, I can say confidently he won't be playing against lefties. He's a couple years removed from cranking 32 homers with the Mets, but even failing to capture that high degree of success hasn't kept him from being an above average offensive player against right-handed pitchers (110 wRC+ in 2013 and 120 wRC+ in 2014). Davis should be a bargain bin option at first base when you're looking to spend heavily elsewhere on your roster.

Brett Lawrie kicked the door in during his rookie season in 2011, but it has been more downs than ups for him since. A change of scenery could allow the 25-year old third baseman to tap into the tools that excited prospect evaluators and baseball fans not that long ago. Don't turn to him yet in daily games, but file his name away as one to watch early this year.

A dreadful start to Vogt's career weighs down his since 2012 numbers above. In his most extensive big league action which came last year, Vogt posted a 119 wRC+ in 245 plate appearances against right-handed pitchers. As long as he's catcher eligible at the daily site you choose to play at, he'll be a low-end usable option.

Marcus Semien is kind of interesting. He's been excellent in the upper minors (142 wRC+ in Triple-A last year) but unable to translate that success to the majors. Strikeouts have been a problem (28.2% K in his career) in the majors but not in the minors. With just 326 plate appearances under his belt in the majors, the book shouldn't be closed on Semien yet. His slightly above average offensive play against southpaws in his limited big league career already makes him serviceable at shortstop as a punt play when facing he's one.

Sam Fuld is a non-option in daily games, but reserve outfielder Craig Gentry could be when he starts against lefties. Gentry has 414 plate appearances against left-handed pitchers since 2012 and a 114 wRC+ to show for them. He won't offer power, but his propensity for making contact, ability to draw walks and his base stealing prowess make him an under the radar thrifty pick in daily games.

Sonny Gray is a good starting pitcher, but he's not a great one. His 20.4% K last year was exactly league average, per FanGraphs. Gray's walk rate was a little worse than league average, but his 55.9% ground ball rate was very impressive. The 25-year old's value will be tied to who he is facing.

The comeback tale of Scott Kazmir is quite unique. The southpaw set new career bests in FIP (3.35) and walk rate (6.4%) in a season last year. Kazmir slightly bested the league average in strikeout rate and could add to his punch-out total if he can induce a few more empty swings like he did in 2013 (10.1% swinging strike rate). The lefty is a slightly better daily baseball option than Gray, but he, too, isn't an automatic start every time out.

Jesse Hahn wasn't fazed by making the leap from Double-A to the majors last year. He can miss bats and keep the ball on the ground (50.3% ground ball rate). In order for him to take another step forward he'll need to cut back on the free passes a bit. Hahn could easily emerge as the best starting pitcher in this rotation.

Jesse Chavez basically came out of nowhere last year. Prior to 2014 he'd appeared in over 200 major league games in relief and started only two. Last year, he started 21 games and managed a 3.66 FIP with a 7.7% BB and 22.3% K. His underlying stats were roughly as good as they were shocking, and a quick glance at his Brooks Baseball page suggests the addition of a cutter to his repertoire in 2012 plays a hand in his late blooming. Gamers might be reluctant to buy what Chavez is selling, but his stats paint the picture of sustainable performance.

Could Pomeranz be the 2015 version of 2014 Jesse Chavez? He might be. Like Chavez, he should get the chance to start the year in the rotation after spending most of the prior year in the bullpen. As a middle reliever Pomeranz had zero daily baseball value. As a starter in a pitcher-friendly park with a good strikeout rate he'll have much more than zero value this season.

Lawrie's change of scenery could be a blessing for unlocking his talent, but the change of home ballparks is dreadful. As a right-handed batter, Lawrie enjoyed park factors of 119 for doubles/triples, 129 for homers and 105 for runs scored at the Rogers Centre in Toronto. Those park factors drop to 103, 87 and 101, respectively, in Oakland.

The A's willingness to squeeze every ounce of offensive value out of their roster by platooning players has been welcomed by daily gamers in years past and will once again yield some nifty bargains this season. There isn't a single star level player in the lineup, but there are options 1-through-9 in the lineup (with the exception of Fuld against right-handed pitchers). It's highly likely the A's batting order will be juggled depending on the handedness of the starting pitcher facing them, and that will create some stacking chances when they play against a bad pitcher or are playing at an offense-enhancing park.

The pitching complements the hitting well. Again, there isn't a star caliber player in the rotation, but all five starters will have value this year in daily games. In fact, even the non-rotation members who fill in -- or return from injury -- should merit usage this season.