The Mariners were in it down to the wire last year when they won 87 games, and they should once again be one of the better clubs in the American League. They have a nice balance of offense and defense and daily gamers will find a variety of top shelf talent and usable bargain picks sprinkled up and down the roster.

Get your pitchers ready to roll out at Safeco Field. The ballpark reduces run scoring 12% to lefties and 11% to righties. Fly-ball pitchers can take solace in knowing homers are reduced by 12% to right-handed batters and amplified by the small margin of 2% to lefties. As the table illustrates, reaching base by hits or error is slightly more challenging in Seattle than at a neutral ballpark.

Mike Zunino is one of the best pitch framing catchers in the game and plays frequently enough Jesus Sucre's mediocre ranking won't hurt the M's starters that often. Zunino's ability to get called strikes on fringe pitches at a higher rate than the vast majority of his peers will be especially helpful for the young arms following the studly duo headlining the rotation.

Who will start at shortstop?

This is a battle between young shortstops Brad Miller and Chris Taylor. Miller limped to an 86 wRC+ last season in 411 plate appearances after an above average showing in his rookie season (105 wRC+). His strikeout rate ballooned from 15.5% to 23.1% and his BABIP dropped from .294 to .268 as the quality of his batted balls decreased. The door was opened for Taylor to get a look, and he responded with a 103 wRC+ in 151 plate appearances. It's a wide open battle where the loser has a high probability of being optioned to Triple-A to receive steady playing time in an effort to continue their development. Neither is going to be a daily fantasy star, but each is capable of playing them self into punt territory.

Who claims the fifth starter spot?

This is not nearly as wide open a competition. Taijuan Walker is head and shoulders above Roenis Elias and Erasmo Ramirez in talent level, and with the Mariners looking to make a postseason run, they won't screw around with service time by sending Walker to the minors. If he plays well this spring, he'll be the fifth starter and one worth keeping tabs on in the regular season due to his big strikeout potential and great home ballpark.

Austin Jackson kicks things off at the top of the order as an above average offensive player against lefties and righties. Unfortunately, he's coming off a down season in which he managed a 85 wRC+ and .090 ISO. He did use his above average speed to steal 20 bases, but he'll need to right the ship with his bat if he hopes to hold down the leadoff spot and remain daily game material. At 28-years old, Jackson is young enough to expect a rebound from.

Seth Smith will form a platoon with Justin Ruggiano in right field for the Mariners with Smith facing right-handed pitchers and Ruggiano facing lefties. Both players have bargain bin value slotting in the top third of the lineup with above average hitting skills against the handedness pitcher they'll be facing.

Robinson Cano is the star of the offense and plays a position that's not noted for offensive fireworks. The left-handed hitting second baseman is a thorn in the side of right-handed pitchers. Since 2012, he has the second highest wRC+ among qualified hitters facing them. His ability to rope line drives at a high rate mitigates some of the problems presented by his home ballpark. Cano will be one of the best big ticket items for daily gamers to spend on at the keystone position.

Nelson Cruz adds some thunder to a lineup that lacked it last season. Cruz led the majors with 40 homers and his .254 ISO ranked seventh among qualified hitters. Since 2012, he's been one of the best hitters in the league facing left-handed pitchers ranking 15th in wRC+ and 20th in ISO.

Kyle Seager joined the $100 million contract club this offseason, and his hitting skills against right-handed pitching helped net him the big bucks. Since 2012, Seager ranks fourth among qualified third basemen in wRC+ against right-handed pitchers. He'll be a daily game consideration at the hot corner against most righties, and the addition of Cruz to the lineup could net him some extra RBI this season potentially pushing him into triple digits.

The depth at first base and offense suppressing nature of his home ballpark will make it difficult for Logan Morrison to regularly find his way onto daily game rosters. When he does, it will likely be a result of a cheap price tag and a favorable road matchup against a bad right-handed pitcher.

Mike Zunino hit 22 homers last year. His home run total tied for third among catchers. His .199 batting average and .254 OBP were unacceptable to role the dice on him in cash games last season, but his power made him a GPP option. He'll remain a GPP usable catcher and is young enough with a good enough pedigree to suggest a step forward with his batting average and OBP.

A left field platoon of Dustin Ackley and Rickie Weeks will help the Mariners get the most out of the position offensively, but neither hitter is good enough to warrant usage at home. However, their prices could be held down to the point where they become superb road values in hitter-friendly parks. 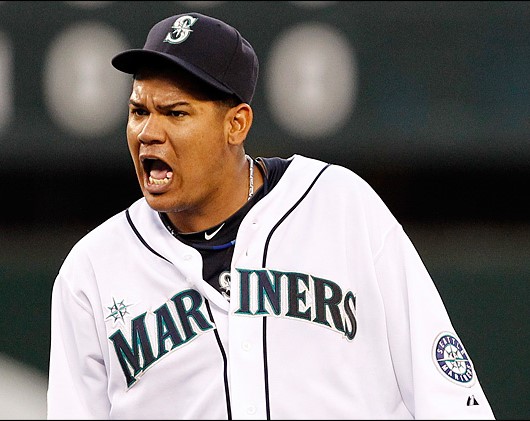 Felix Hernandez didn't earn the name King Felix by being a ho-hum starter. he's one of the best pitchers in the game, and his price will reflect his studliness. Hernandez finished last year ranked third among qualified starters in FIP and ground ball rate (56.2%) and sixth in strikeout rate. His exceptional ground ball rate keeps him on the radar even in homer-friendly road venues.

Hisashi Iwakuma isn't your typical number-two starter. He ranked 22nd last year in FIP and 13th in K-BB% (18.8%). The split-finger throwing stud, like Hernandez, induces a ton of ground outs. Last year, he coaxed ground balls on 50.2% of the balls put in play against him and that rate lines up nicely with his career mark of 50.1%. Iwakuma is ballpark proof and a daily baseball asset.

James Paxton's rookie season was better than even his most ardent supporters could have expected. He was a well thought of pitching prospect as a minor leaguer, but one who demonstrated below average control and carried questions about his ability to stick as a starter with him to the bigs. He answered the bell last year, but his 9.6% BB speaks to continued below average control. The southpaw makes it three-for-three on starters in the M's rotation who are dangerous for worms in the infield. Paxton had a 54.8% ground ball rate last year. He's nowhere near the same class of pitcher as the two men at the top of the rotation, but he's a viable daily baseball option. His control problems necessitate checking to see who's catching when he takes the hill. If Sucre is behind the dish, look elsewhere unless the matchup is too dreamy to pass up.

J.A. Happ escapes the homer-happy confines of the Rogers Centre for Safeco Field, and that alone will get him a few extra daily turns this season. He's still not very good, though. His 4.27 FIP last year lines up with a 4.36 FIP in his career, and the .327 wOBA he allowed to right-handed batters last year was actually an improvement over the norm for him. Since 2012, he's faced 1,299 right-handed batters and allowed a .331 wOBA (tied for 18th highest wOBA allowed). Don't be shy about stocking up on right-handed batters when Happ is starting.

Walker pitched only 38 innings in the majors last year, and a projected full season in the majors is a huge motivating factor for him being picked as a player whose stock is on the rise. A 4.81 ERA at the Triple-A level belies strong rates of 23.5% K and 7.9% BB. Give him a pass, the Pacific Coast League is a nightmare for pitchers. Control is sometimes a problem for Walker, but a power arsenal earned him accolades from prospect pundits. The learning curve varies wildly for different young players, but Walker's upside makes him a sweet -- and likely cheap -- GPP play early in the year.

In Baltimore, Cruz hit with a home ballpark factor of 100 for homers for right-handed batters. Safeco Field reduces homers to right-handed batters by 12%. Ouch. For a player who led the majors in homers last year, losing some taters is a surefire way to see your stock go down.

There's a little something for every daily gamer's budget in the Mariners' lineup. The 2-through-5 hitters have some stack upside against right-handed pitchers. Zunino is a GPP play for gamers looking to spend light on catcher with the upside of a homer, and the left field platoon could result in a pair of cheap players (Ackley and Weeks) who are rosterable away from Seattle.

Happ is really the only bad pitcher in the M's rotation. And as I noted above, his home park will still result in him being useful on rare occasions. King Felix and Iwakuma are one of the best one-two punches to lead off a rotation, and Paxton and Walker are the young guns who add length to it. Four out of five daily game options in a rotation isn't too shabby.