The Rays' roster seems to be perpetually changing, and the sub-.500 record projection is chiefly the product of unproven players. The Rays are a youthful group who have daily baseball upside, but the upside comes with question marks about how soon -- if at all -- it comes to fruition.

Unlike most of the other parks in the American League East, Tropicana Field is one where you'll want to use starting pitchers in daily games. Not only does the park suppress homers to lefties and righties, 15% and 11% respectively, but it also reduces run scoring, 3% to lefties and 7% to righties. If the young hitters on the Rays struggle this season, there will be further incentive for using pitchers in this pitcher-friendly ballpark.

Rene Rivera was one of the best pitch framing catchers last year, and in a small sample Curt Casali was slightly above average as well. Chris Archer and Alex Colome are the pitchers (and Matt Moore when he returns from injury) who stand to benefit the most from Rivera's strike-stealing excellence.

Colome is listed as the projected fifth starter, but this is truly a wide-open competition. Nate Karns, who made two starts in the majors after tallying a 4.03 FIP in 27 Triple-A starts in 2014, is Colome's primary competition for the gig. Both right-handed pitchers have control issues. Karns walked 9.9% of the Triple-A batters he faced last year, and Colome walked 8.1% of the batters who stepped in against him at the Triple-A level in 2014. Colome's walk rate is a marked improvement from recent seasons, but it's only passable, and he'll need to prove he can retain his control gains before being trusted in daily games.

Neither should be trusted right out of the gates, but throwing to a stud pitch framer like Rivera in a ballpark that reduces run scoring means the fifth starter could have value at some point this season. Furthermore, eventually Moore will likely rejoin the rotation. Moore is recovering from Tommy John surgery. The one-time blue chip prospect is the most exciting name of the trio. The southpaw has enormous strikeout potential, but he'll need to cut down on the free passes he issues if he hopes to have steady daily baseball value.

Asdrubal Cabrera is a safe bet to start in the Rays' middle infield. Where he'll start -- second base or shorstop -- will be dependent on how well Nick Franklin is able to handle the defensive duties required at shortstop. On daily fantasy baseball sites that allow for multiple position eligibility (DraftDay immediately comes to mind), a bit of jostling between positions could enhance the value of both players since they'd be eligible at two weak offensive spots on the diamond. Franklin, a once well regarded prospect, will have to do a better job of translating his minor league success to the majors if he hopes to stay in the lineup. 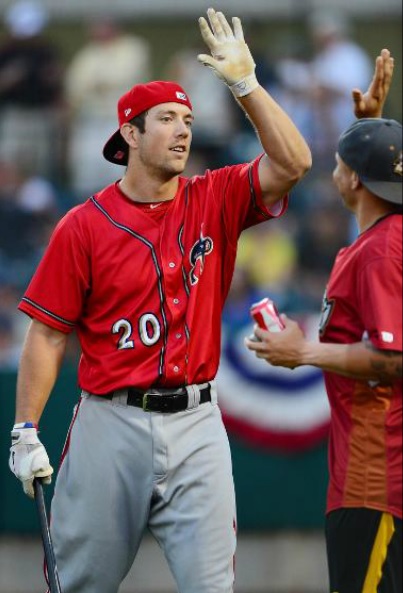 This is a lineup that won't generate a ton of daily fantasy interest to open the year, but it features some young hitters who could emerge as viable options during the season. Desmond Jennings leads things off with a useful blend of power and speed, but his career splits stipulate he's best used against southpaws. He's followed by a hitter, John Jaso, whose splits look vastly different. Jaso has tallied only 109 plate appearances against lefties since 2012 and the Rays will find someone to platoon with him. He has, however, been very effective against right-handed pitchers. All but five of his innings in the field, per FanGraphs, have been catching, and that makes him a nifty catcher-eligible designated hitter who holds sneaky daily baseball value against right-handed pitchers.

Evan Longoria is the lone star in this lineup. He's an above average hitter against all pitching, but he's a beast against lefties. Since 2012 he ranks second in ISO (.244) and fourth in wRC+ (152) among qualified hitters facing lefties. His less gaudy numbers against right-handed pitchers should keep his price tag at a reasonable cost to deploy him habitually against southpaws in daily baseball games. James Loney's lineup slot could net him the occasional value pick when he faces a non-elite right-handed pitcher, but he's not a player who will carry daily teams.

Steven Souza Jr. is a player who could emerge as a daily baseball stud. He was one of the main pieces acquired by he Rays when they dealt former Rookie of the Year Wil Myers. Souza crushed upper-minors pitching over the last two years, but he was old for those levels. Players who dominate in the minors when they are old for the level they're competing at are always saddled with the burden of proving their results can translate to the majors, and Souza is no exception. If it clicks for Souza, he could be a multi-faceted offensive talent capable of really helping daily baseball teams.

Kevin Kiermaier fared well against right-handed pitchers as a rookie last season, but not so much against southpaws. His platoon split is an extension of what he displayed in the minors, so sharing outfield duties with someone more capable of handling left-handed pitching (Brandon Guyer) is a near certainty. Both Kiermaier and Guyer could have value play appeal in daily baseball depending on where they slot in the lineup during their respective starting days.

Cabera will hold more value at shortstop than at second base, but both positions are weak from an offensive stand point, and being an average hitter (like Cabrera is) is often good enough to be in the daily baseball mix. Rene Rivera was surprisingly useful last season when the circumstances were just right, but he's a 31-year-old catcher who surpassed 300 plate appearances in the majors for the first time last year. His value lies in his defense, not his offense. Franklin has done enough in the minors to warrant monitoring early in the season, but hitting ninth really hurts his run production value and will cap his ceiling at punt play if he's unable to move up in the order.

The rotation is no longer anchored by David Price, but it's something of a potential treasure trove for daily gamers. It all starts at the top with Alex Cobb. He ranked 20th among qualified pitchers in FIP last season, missing bats aplenty, walking only 6.9% of the batters he faced and inducing ground balls at an astounding rate of 56.2%. The formula of success worked to the tune of a 3.23 FIP. He'll handle the ace role with aplomb.

Chris Archer walked batters at a slightly higher rate in 2014 than in 2013, but that's a price daily gamers are glad he paid to kick his strikeout rate up above 20% (21.1% to be exact). A little bit of good fortune keeping the ball in the yard helped Archer's ERA best his xFIP, but he owns an electric arm capable of firing seeds. The most exciting statistical advancement for Archer last year was found in his batter handedness splits. After ceding a .346 wOBA to lefties in 2013 he stifled them in 2014 in route to netting a .283 wOBA against. His wOBA allowed to left-handed batters will likely settle somewhere between those two mark. His significant gains make him a pitcher who daily gamers don't have to immediately cast aside from consideration when he faces lefty-dominant lineups.

A key piece of the Price trade haul was Drew Smyly. The lefty's 3.24 ERA last year belies his ERA estimators, and he should be pegged for regression. Having said that, he's still an enticing pitcher for daily games when the matchup is right thanks to solid strikeout and walk rates. His biggest problem is a .334 wOBA allowed to right-handed batters last season. It's best to avoid him against righty-heavy lineups, however, he's nails against lefties and is a great option against teams that are led by their left-handed batters.

Jake Odorizzi will be a GPP darling at sites that score strikeouts favorably. He struck out more than a batter per inning last season (9.32 K/9), but his high fly ball rate will lead to homer problems in some games. The ideal scenario for rostering Odorizzi is when he's facing a team that strikes out at a high rate in a ballpark that reduces home runs. In the outlined scenario, Odorizzi has huge potential to carry daily baseball teams, and he can even be considered for cash games in that situation.

Souza escapes a crowded outfield situation with the Nationals and joins a Rays roster that's desperate for offensive production and can offer him full-time at-bats. The change of scenery earned him the up arrow, now it's time for him to produce in the Show. His patience, power and ability to swipe bags in the minors make him a player who could emerge from relative obscurity and become a daily baseball household name.

Cabera received 296 plate appearances from the number two spot last year and another 31 as a leadoff hitter. As it stands, he's unlikely to match those plate appearance totals from the two spots in the order this year. His run scoring potential takes a hit as a result, and hitting in the bottom part of the order will also cut into his at-bat totals, which hurts as well.

Some extreme platoon splits for Rays' hitters could result in bargain plays, but there isn't much stacking potential at the moment. Longoria will be a strong option against lefties all year, but his ceiling will be tied to Jennings and Jaso staying healthy -- not a given for either hitter -- and Loney and Souza producing behind him. The lineup won't create much buzz, but the pitching could.

The rotation, when Moore is healthy, could have legitimate pitching options for daily gamers every day. A one through five of playable pitchers is unusual. All of the pitchers will get a lift when pitching at home, and the offseason addition of Rivera as their catcher will help greatly, too. For a group lacking identifiable star power, this rotation is one that should yield profitability for daily gamers.