News that ace Yu Darvish will likely require Tommy John surgery is probably the reason there isn't a line up presently. The team won only 67 games last year, but they should be better than that this season.

Left-handed batters look to be the main beneficiaries playing in Texas since they get a 5% boost to homers, a 6% boost to singles and a 10% boost to runs scored. They do get docked 8% on doubles/triples, though.

Robinson Chirinos' bat might not be good enough to offset his poor pitch framing and keep him slotted in front of offseason acquisition Carlos Corporan. Since neither is a daily baseball asset with their bat, Corporan is the preferred starter since he'll aid the pitching staff's quest to be daily baseball relevant.

Who plays in left field?

Michael Choice is listed above as the projected left fielder only because someone had to be. He'll be competing to start with Ryan Rua, Jake Smolinski, Mitch Moreland, Ryan Ludwick, Kyle Blanks (once he's healthy enough to play the outfield), Carlos Peguero, and possibly Delino DeShields. If Ludwick finds the fountain of youth he could be interesting, but he's hit just 11 homers in 540 plate appearances over the last two years. Rua hit well in the minors, but his tools grades don't provide optimism for him doing so in the majors. Smolinski's BABIP fueled 92 plate appearance heater last season doesn't make up for a track record of failure in the minors. DeShields will probably be on the Rangers roster all year since he was their Rule 5 Draft selection and he'd have to be offered back to the Astros if he isn't.

The players who are most intriguing are Choice, Peguero and Blanks. Choice struggled last year but was lauded for his power as a prospect. Peguero has hit for a ton of power in the minors, but he also has a ton of swing and miss in his game. Blanks profile matches that of Choice and Peguero; big power but contact issues. Power plays in GPPs, so if any of these guys lock up playing time and translate their thump to the majors, they'll be in play as a low-priced gamble.

Who serves as the designated hitter?

Moreland wasn't addressed above because he'll likely be the designated hitter. His struggles with southpaws makes him a prime platoon candidate. A pairing of Moreland and Blanks could be nifty since Blanks has a history of hitting lefties hard in the minors. He's also hit them hard in the majors. Since 2012, Blanks has 158 plate appearances against left-handed pitchers and totaled a .176 ISO and 143 wRC+. Platoons occasionally provide bargain players, and this one would do just that. 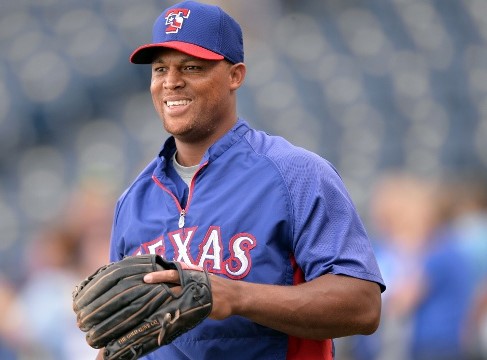 The first year in Texas was not a good one for Shin-Soo Choo, but he should rebound this season. His extreme platoon split is actually favorable for daily games. He's a below average hitter against left-handed pitchers, and that drags down his total cost, making him a bargain when facing a right-handed pitcher. The 153 wRC+ he's tallied against right-handed pitchers since 2012 is tied for the fifth best mark among qualified hitters with Jose Abreu and Andrew McCutchen.

Elvis Andrus hits for almost no power. His position, shortstop, and projected lineup spot, second, as well as his speed at least make him a semi-factor in daily games as a cheap choice. Expanding upon his speed, Andrus stole 27 bases last year but was inefficient getting caught 15 times. In 2013 he stole 42 bases in 50 chances. A more efficient base stealing season would help Andrus greatly. As it stands, his ceiling is low and a move down in the order would cripple the modest daily game value he possesses.

Choo's poor first season in Texas was outdone by Prince Fielder. The burly slugger's season ended after 178 lackluster plate appearances with him undergoing neck surgery. Hitting behind him is the lone star for the team from the Lone Star state, Adrian Beltre. He has annihilated left-handed and right-handed pitchers over the last three years ranking second among qualified third basemen in wRC+ (140) versus righties and seventh against lefties (137 wRC+). The club's projected cleanup hitter is reliable, but his daily baseball value will be dragged down if the Rangers' offense remains poor and strips him of run production upside.

Bypassing the left field and designated hitter spots since they've been addressed already means Leonys Martin is up next. He's expressed a desire to hit leadoff for the club -- and his speed would fit well at the top of the order -- but that spot should be reserved for OBP-machine Choo to open the year. If the offense is woeful again this season, dropping Choo to the heart of the order while moving Martin up is possible. Martin is an efficient base stealer who has swiped 77 in 98 chances over the last two years. He's also been a nearly average hitter against right-handed pitchers. When Martin is facing a bad right-handed pitcher and a catcher who struggles to control the run game, he could have some sneaky daily appeal.

Chirinos ripped six homers in 105 plate appearances against left-handed pitchers last year and had a 45.1% fly ball rate, per FanGraphs. It's a small sample size, however, it points to the possibility of him having punt play potential in GPPs for the chance he runs into a pitch. Rougned Odor quickly proved capable of hitting right-handed pitchers at a respectable level in his rookie season last year. He was only 20-years old in his debut year. There is a bit of upside here, but temper expectations with him hitting at the bottom of the order.

The grim news regarding Darvish forces Yovani Gallardo to the front of the rotation. He keeps the ball on the ground at a high rate (50.8% in 2014), which helps him keep the ball in the yard, and he posted a career best walk rate last year (6.6%). The 29-year old is also a reliable innings eater who has pitched at least 180 innings every season since 2009.

Derek Holland is the best healthy pitcher on the Rangers. Injuries limited Holland to six appearances (five starts) last year. His strikeout rate was short of previous season's marks, but he pounded the strike zone allowing a walk to just 3.5% of the batters he faced. In the lefty's last full season, 2013, he totaled a 3.44 FIP with a 21.1% K. If he can retain his reduced walk rate and recapture some punch outs he'll be a decent daily baseball option. The only thing that limits him from being an excellent choice in the perfect world scenario is the high probability his offense will be bad. A lack of run support will make winning games tough.

Colby Lewis is not a number three starter. On a team with a good rotation, Lewis would be a swing man. All batters abused him last season with left-handed batters posting a .373 wOBA and right-handed batters a .355 wOBA. Lewis will be a very popular target of stacking against.

Speaking of stacking, Ross Detwiler will provide stacking chances, too. Since 2012, he's allowed a staggering .341 wOBA to right-handed batters. His wOBA allowed skyrockets to .368 if you eliminate his 2012 season. Yikes. The last spot in the rotation is a battle between more bad pitchers. Whoever wins the fifth starter gig will make it a trio of Rangers' arms who daily gamers will salivate seeing listed as probable.

It can't get worse than last year. A healthy Fielder could be a bargain before his price catches up to his production. Yes, there is a risk he won't be the same player after neck surgery. In fact, it's a distinct possibility. I'm not a doctor, though, and I can't speak to the odds. What I can speak to is his statistical output prior to his injury plagued debut with Texas. From 2011-2013, Fielder ranked 10th among all qualified hitters in wRC+ (146). He doesn't have to bounce back all the way to have daily baseball value.

In Gallardo's early years he was a bat-missing pitcher. From 2009-2012, his lowest single season strikeout rate was 23.7%. He's re-invented himself as a pitcher, and his strikeout rate has taken a nose dive. In 2013 he had an 18.6% K and last year it was down to a 17.9% K. A move from the National League to the American League should ensure another down tick in strikeout rate if he maintains his new approach to retiring batters. If he was backed by a better offense he could have bottom of the barrel starter appeal for gamers chasing wins, but there simply isn't much to like in Gallardo's daily baseball profile.

Beltre is the only offensive player to get stoked about initially. Choo and Fielder have the upside to re-enter the upper-echelon tier at each of their respective positions. Beyond those three, daily gamers will be hunting for bargain plays on the Rangers. If Choo and Fielder hit well, there is stack potential when the Rangers face a bad right-handed pitcher.

The Rangers' rotation looks like the gift that will keep on giving. Daily gamers will be licking their lips when the 3-through-5 starters take the ball. The stack potential against those pitchers is huge. Furthermore, they'll make normally unusable cheap players viable plays.