Mike Barrett from the Trail Blazers Broadcasting Crew shows us what its like being an NBA broadcaster. 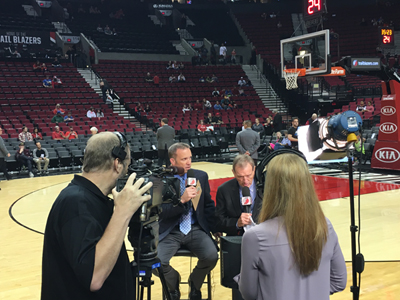 As a boy who had a father as a coach, Mike Barrett, was always interested in the game of basketball. Right around the time of the Blazers first NBA Championship, he latched on to the likes of Bill Schonely and other Blazer broadcasters as inspiration. Starting at high school sports broadcasting, he moved his way through the “ranks" and found himself at radio KXL covering the 1992 NBA Finals in Chicago. From 1992 to 1999, he spent doing radio for the Trail Blazers until the Trail Blazers hired him in 99 to become the play-by-play television broadcaster. I spent a preseason game on October 8th with him and his video crew to give you a detailed description as to what makes him one of the best broadcasters in the NBA.

About 4 hours before tip-off, Mike Barrett arrives at the Moda Center to prepare, read over stats, and conduct some pre-game practice. With a backpack loaded with his own statistics and player analysis from both teams, he first pulls out a manila folder that's blue in color and represents the opponent of the Trail Blazers on this October night. In the blue folder it holds all of Mike's information on the Golden State players, GM, coaching staff, and more. He's got one for all 32 NBA teams and it possesses his own original notes as well as statistics, past to present. He comes “more prepared than any other announcer I've worked with and I've worked with a lot of announcers" said Mr. Rice, his counterpart and color broadcaster said. When we talked about why he needs all of the notes, paper, statistics he explained “although I may only use 10% of my notes, I always need to have all of them in case someone unexpectedly goes in or something unexpected happens". He used Tim Frazier's hot streak in the last game as one example. Saying he was prepared and had information on what Frazier had done in high school and college, that backed up his in-game hot streak. He keeps a close-eye on players before the game to see if they're hitting shots, look fresh, or if they talk mention anything to him specifically, so he can also add that to the broadcast if necessary.

Wearing a checkered suit and silver tie at this preseason game, he was easily identifiable to most Blazer fans, and very understandably so. He's been around this team and organization longer then any player or coach. As I talked with many fans, Mike and Mike's broadcast was described as “original", “one of the best I've heard", “the definition of Portland and their fans" and that speaks volumes to both Mike Rice and Barrett. Mr. Barrett told me that it's extremely touching to hear the great words and it's amazing how much people “love our broadcast". As an Oregonian himself, MB as most co-workers call him, understands how important this team is to the fans. “Both myself and Mike try to be ourselves, we want to be the same on air, as off" Barrett said. He continued on, saying “Part of my job, I feel, is to be accessible, transparent, and be there for fans, whether at a game or in the grocery store I will always stop and talk to our incredible fan base".

When speaking with Rice his response about the authenticity of their broadcast was “It's as if we're in a bar commentating the game". Rice went on to tell me about a time when they were both on the road and a stage manager said “I've worked with a lot of teams and you guys are the only ones who give shout outs and birthday wishes". Something you probably wouldn't know unless you were to compare their broadcast to that of other NBA teams'. But that's just it, as a portlander, not everyone has the chance to understand that what they're watching is unique, authentic, and different from other local NBA broadcasts.

Mike Rice, Barrett's partner in crime for over 10 years, had more to say adding that “Mike is Mike, what you see is what he is". I talked with Rice about his relationship with Barrett and it seemed apparent the two had fun and worked extremely well together. When I asked him what some of his favorite memories are with Barrett, his response was interestingly put, stating “what happens tomorrow may be the funniest thing that has happened with us". As they spend a lot of nights and days on the road, he told me the two consistently hangout, play tennis, go on bike rides, and go out to eat. When I asked him about what MB could improve as a broadcaster he simply said “making sure his partner has an iced tea before the tip-off". 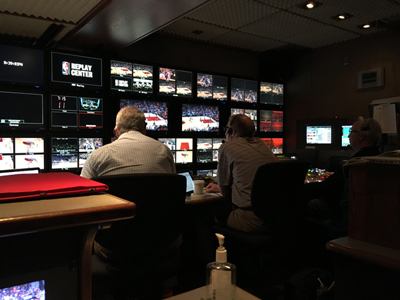 In-game, Mike and Mike are hard at work, as well as their video crew who generally sit in a truck outside the court. As Barrett and his partner Rice are speaking and providing audio, the crew is providing the visual side and video aspect of the game. All we, as fans see, are the two talking, but the production and flow of the broadcast is largely what the backroom video crew does to support the two. With dozens of screens and video to cue up, it's a game of improvisation and thinking on your feet. Jeff Curtin, Mikes' director, is the one who does most of the talking thru headsets to everyone involved with the broadcast. Signaling to Mike what's coming up and to the crew what is happening, what's upcoming, and when to revert to certain things. He doesn't back seat drive, he's just there when his team needs him and they bounce ideas off of each other when pauses or commercial breaks occur. During the game, Mike Barrett noticed the General Manager of Golden State behind their bench and recommended Jeff get a cameraman to get a picture of him, these things happen frequently to create a more prepared and fluid broadcast. And it goes both ways, Jeff and the crew have many sponsors and shout outs they need to fit in throughout the game. In this case, about mid-way thru the game Jeff told the Mike's they were going to talk about a fundraising event that they would be attending. Neither of them knew they were attending and some banter started between the on-air crew and backroom video staff. Live on air, Mike decided to let Jeff know about it by saying “I had no idea we were going, but I'll be there in my sweats" as a joke.

Jeff and Mike have worked together since Mike was attending Oregon State about 25 years ago. They're friends that work together and that's something you don't see often in any industry. In fact, it seemed as though the whole crew were friends. Joking around, taking playful shots at one another, and working as a real team would.Just as team chemistry is important on the court, its clearly just as important for the camera crew and broadcast team as well. Mike credits his video crew on almost every broadcast because he says “they work longer then we do". Not only that, but he credits his success with the broadcast to the crew adding that “the broadcast crew and their consistency, familiarity helps us to our success".

As Portland Trail Blazers' fans and players are known for their authenticity, originality, and personalities, so to are the broadcast crew. Mike Barrett along with his partner, Mike Rice, have created a relationship with this city, this state, and this team. A bond that would have other fan bases jealous, they have a very passionate, interesting, and unique broadcast. Mike and Mike being the focal points of that broadcast, but as I now know, the video crew and people behind the scenes make that so. Clearly this broadcast team is one of the best in the NBA, consistently bringing in local fans and having everyone watching feel welcomed. 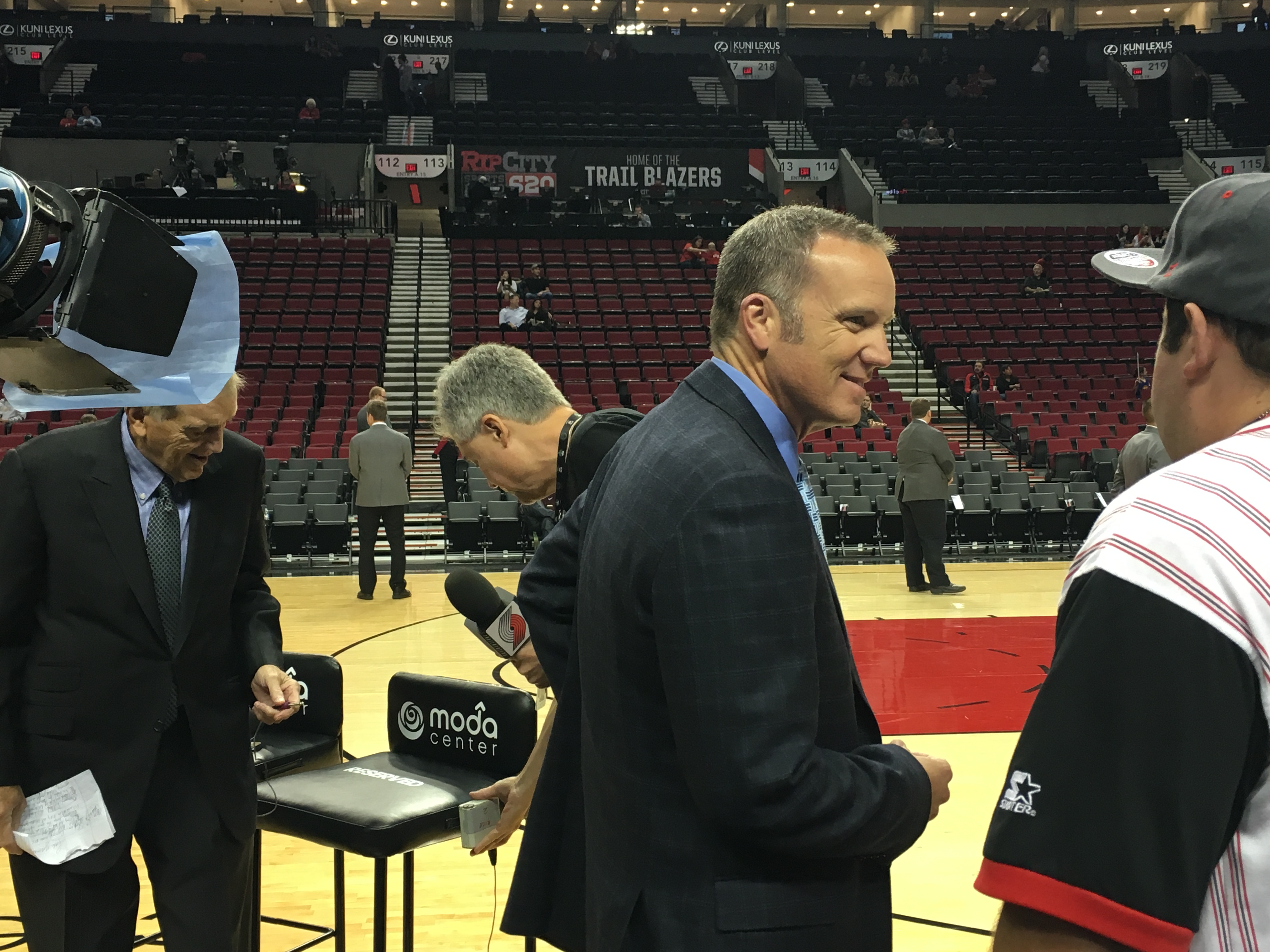 As far as this upcoming season goes for Barrett, he expects this Trail Blazers team to be better than anticipated. If anything he says “this team will have one of the most entertaining brands of basketball in the league". As the season is just around the corner, Mike himself is really looking forward to all the new faces and telling fans around the world about them. In most cases, he's the “story teller for the fans who watch on TV". “The past three to four seasons we've seen the same players and so we're familiar with them. This year we have a ton of new guys and we, as a broadcast, are the connection from player to fan. Essentially, we are the conduit to Trail Blazers basketball for the fan watching on television". The best thing about his job in his mind is doing just that, telling the stories and building the relationships with players and fans.

Saying hello to the security, servers, fans, coaches, players, is Mike Barrett. He's there when the doors open and generally there when they close. Being around this team for over 30 years in one aspect or another, Mike continues to say how blessed and happy he is to be apart of such a “great team". He's always crediting players, coaches, his counterparts, and his team, rarely praising himself, because “he understands that the team and game are more important then himself" said his partner Rice. Deemed one of the most prepared, humble, and friendly broadcasters by many, Barrett is an unsung hero with a team that has a wildly passionate and dedicated fan base. He is someone who spends the greater part of his days interacting, relating, and providing the best experience for the best fan base in the NBA. This Trail Blazers team may have something to prove with how much they've lost, but Barrett certainly doesn't need to prove anything to anyone. As a relatable, humorous, and hard-working individual, fans and people around the league can clearly see he's one of the best in the business.

I would like to express my thanks to Jeff and his entire video team for the time and access to making this article. I would also like to thank Mike Barrett, Mike Rice, and others for their quotes and time. For more insight from the Trail Blazers, Mike & Mike, and their video crew follow Mike Barrett on Twitter or instagram at @blazerMB, Mike Rice on twitter at @mikerice6, Jeff Curtin at @JeffCurtin on Twitter, and the Trail Blazers on twitter at @trailblazers.