NBA TV's Kristen Ledlow (@KristenLedlow) sat down with Oliver Maroney, to talk everything hoops and her journey to broadcasting stardom. 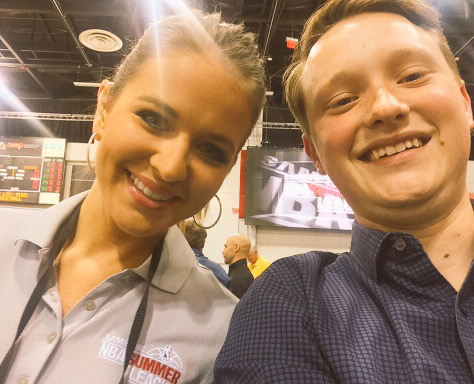 As Michael Jordan was doing a post-game interview with a broadcaster on television, there was a middle school girl sitting in her living room watching in amazement. As a basketball player herself, the young girl was so intrigued at the moment that was taking place. But more importantly, she was surprised that the woman on the court interviewing Michael, was getting paid to do her job. “That was the moment I realized I wanted to be a broadcaster" she said. That girl was Kristen Ledlow, current NBATV broadcaster and co-host of NBATV's Inside Stuff. She's been on the fast track to sports broadcasting stardom after finding her passion early.


Ledlow, began her ascension in sports, after breaking the points record in basketball, playing volleyball, and double majoring at Southeastern University. Upon graduation, she continued on to her passion of broadcast with local news in the Tallahassee area as a sideline reporter, writer, and broadcaster. After being in local news, she was hired on at FOX sports, and covering the SEC and ACC.

Performing well at FOX for a couple seasons, she then joined CBS sports radio in Atlanta, Georgia. When she was at CBS, she heard from a friend about the popular basketball television show “NBA Inside Stuff" (previously with Ahmad Rashad) possibly coming back. She reached out and applied, at very minimum hoping for an audition. “If anything, just to meet Grant Hill, because who wouldn't want to meet Grant Hill?" she said. Days after the audition she was told that she was one of the finalists for the position. Sure enough, she ended up getting hired.

Although it may sound too good to be true, it isn't for someone like Kristen. She is the definition of a workaholic, someone who just doesn't stop. Taking notes vigorously, figuring out what to say, to whom, and when. At the NBA's summer league in Las Vegas, it became apparent to me she got here for a reason. Kristen is an extremely unique individual, constantly trying to get better, and performing under the high pressures of a live broadcaster, who dictates a lot of her own live material. When I asked her what the most difficult part of her job was, the answer was more than refreshing. She said “It's hard to narrow down because I love my job so much. Of course I work non-regular days, late nights, weekends, but it's a job I truly love doing". Multi-tasking, creating dialogue, versed in all facets of basketball, is what makes her one of the best broadcasters in the business.

Of course as broadcasters, you have to capture an audience and understand that. But she really seems to take her audience into consideration when doing anything on air. As one of the summer leagues' games was getting out of hand (a blow-out), Kristen decided to use improvisation to slight her counterpart Rick Fox, because she wasn't invited to play golf with Justin Timberlake. A joke nonetheless, but another example of her on-air personality, creativity, and awareness of the overall fan base.

Growing up, Kristen had a couple major figures that inspired her. “Ernie Johnson, on and off television is the best in the business" she said. Otherwise, she mentioned Rachel Nichols, Michelle Beadle, and Sage Steele were some other broadcasters she looks up to. But at this point, I think its fair to say that she's in that company now.“Anytime I get LeBron its special, he's an awesome guy and the best player in our league. Other than that, anytime I get to interview an NBA legend. I had a very special interview with George “The Iceman" Gervin in San Antonio" Ledlow added about her favorite interviews. Just adding to the point that she is reaching the pinnacle of the best broadcasters.

But just because she may already be there, doesn't mean she's perfected the art of broadcasting. She “absolutely" acknowledged that there are things she has to work on. “I'm constantly working to improve my craft. In the last year, I've focused heavily on interview style and what it takes to create more exclusive, creative content. I want to provide a comfortable interview atmosphere and I also want to work on my studio hosting". The Inside Stuff co-host continues to work on her broadcasting style and also said she wants to focus on “working alongside our analysts to put forth the most entertaining and informative television".

Besides working for NBATV and spending countless hours developing, creating, producing, and building stories for NBA fans to watch, Kristen spends time keeping up with her cat knowledge. Why cats? When she was a little girl, she had a cat that was diagnosed with an illness, named Princess. She wasn't supposed to live very long and ended up staying around for most of Kristen's life. Princess eventually passed away and Ledlow has since adopted a new cat, a boy named Magic. Not only that but she is a proud supporter of the NBA Catwatch (@NBACatWatch), a site dedicated to finding players within the NBA who own cats.

Although she may just look like another person interviewing a player, there is so much that goes on behind the scenes that we, as viewers, don't see. “The manpower, hundreds of hours, and hundreds of people who help in the production are something the viewer just doesn't get to see" she said. Watching her in production, preparation, and on the camera, it seemed as though she was grabbing quotes, preparing upcoming interviews, listening to updates through her ear piece, watching the games from the telecast, and still managing to get the occasional tweet, conversation, or educational piece out to the people around her. Listening to her educate a colleague, she was streaming out player names, statistics, and game information that even the biggest of basketball fans wouldn't have. Kristen Ledlow is certainly someone to look out for, because this is just the beginning for someone like her. A likeable, honest, fun, and creative broadcaster, she continues to excel at creating original, unique content for interviews with the National Basketball Association. 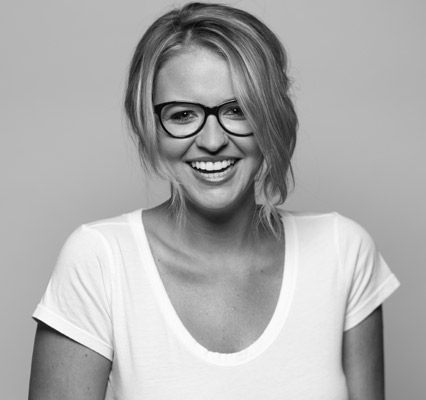 Q: If you were to select an all-NBA starting five, who would it be?


Q: Who do you feel are the most underrated player(s) in the league and why?

A: When I think of the most underappreciated players in the NBA, “The Grindfather" immediately comes to mind! Tony Allen of the Memphis Grizzlies has become one of my favorite players to watch in the league. His defensive prowess changed the momentum in vital minutes determining playoff seeding last season, and the team's defense gave up 8.8 more points per 100 possessions when he was on the bench.


Q: What player reminds you most of yourself and why?

A: As a player, I modeled my game after that of Paul Pierce. Not only did I want the ball in my hands in crucial late-game situations, but I was known to trash talk every step of the way. I've always been extremely passionate; creating a scene after a win and crying after a loss. Oh and “I called game" remains my favorite quote of the 2015 NBA playoffs.

Q: What NBA team do you most like covering?

A: As far as NBA team that I most love to cover, it's impossible to narrow down to just one! I consider it a privilege every single time I get to step inside an NBA arena. The Cleveland Cavaliers, Memphis Grizzlies, and San Antonio Spurs come to mind as some of my all-time favorites to cover, as the organizations exhibit class from top to bottom and have welcomed me with open arms at each assignment. This past season I greatly enjoyed covering my former colleague Steve Kerr and his Golden State Warriors. What an incredible ride!


Q: Which player(s) do you think could have a breakout season?

A: This season, I think CJ McCollum is poised to break out. Just months ago we saw him erupt in a 26-point performance for a career playoff high with the Trailblazers. As major changes were made to the roster in Portland this offseason, CJ will have an opportunity to carry a greater load on the offensive end of the ball. Keep an eye on 'em! I'm also looking forward to watching the 2014 draft class develop, as some of last season's rookies are now healthy and will assume their roles within their respective franchises; Julius Randle and Jabari Parker at the top of my list!


Q: What 3 players do you see having increased minutes next season?

A: Seth Curry will solidify himself as a talent in the NBA. Now with a shot in the Kings organization, I think we'll see a more developed game and a chance to showcase the offensive skill that has been honed in the last couple of seasons in both the D-League and NBA stints. Along with him, Dwight Howard and Andrew Wiggins are my other two. Dwight's struggled with injury and with finding his role in Houston's offense the last couple of seasons, but what we saw in the final weeks of the playoffs proves he's ready to take on a larger role. We all know what he is capable of (think 08-09 Orlando!) primarily on the defensive end, but if the Rockets are able to utilize him as an offensive weapon, he's unstoppable. And Andrew Wiggins may not be an obvious choice as last years rookie of the year, but his role will increase on a national scale as Minnesota no doubt vies for playoff position this season. Expectations for Karl Anthony Towns are astronomical as far as franchise goes, but Wiggins will emerge with experience under his belt and a more developed game.


Q: Have you ever played Daily Fantasy games? What do you see for the future of the league and fantasy basketball?

A: As far as fantasy goes….I played last year in the The Starters' league and believe I finished last. My team was riddled with injury at the start of the season and we were unable to overcome such a huge deficit. Though I did have the best franchise name “Hoops! I Did It Again". The future of fantasy basketball will likely be huge, as the industry has grown exponentially each season and folks within the industry have made great strides in improvement as well.

joshshep50
Really fun interview and great stuff. I love her call of McCollum as the breakout player this year. I love his game. He's shined when he's gotten extended run, and who can't get behind a scoring guard making a leap in production? I'm a sucker for buckets.

Sam
Nice article! Watched Inside Stuff a ton growing up. Love the backstory. She's got some legit Basketball skills.

hall2011
This was a well written article. McCollum is really itching to break out and i think that is why they weren't worried after losing Wes Matthews. I got 3 players that will break out next season. Otto Porter is the most consistent call but i'm going to go with Rodney Hood (Can create his own shot and can still shoot the ball), TJ Warren (He has the total package and will get a plethora of minutes now that Gerald Green is gone) and Tyreke Evans. Tyreke evans hasn't been tyreke since his first year in Sac Town but with the addition of Gentry uptempo offense and his improved mid-range shooting, he has no choice but to put up 20, 5 and 5 again.

sports_25tolife
Lots of love for McCollum in these interviews, agree on the breakout there!