DraftKings is getting ready for March Madness, offering up a massive Tourney Mania Bracket. They will be doing a bracket-style competition from 3/19 through 3/28, barring any sort of scheduling changes within the tournament. DraftKings is currently running qualifiers for this tournament, which is the only way you can enter. There is a $50,000 top prize, but the tournament pays out $200,000, including everybody that qualifies.

For these championship-style tournaments that DraftKings runs, the only way to get in is to qualify. On the home page, there is a filter where you can select qualifiers to see which ones are available on that given day. They are a winner-take-all-style game where the first place prize is a DraftKings Tourney Mania Bracket ticket. Qualifiers will be running through March until all the seats are held (64).

The bracket-style tournament is going to be the 64 qualifiers and they will move on over the course of the tournament schedule above. Qualifiers will battle it out until the end, which is the second day of the Round of 16. It will be a head-to-head battle between each of the users, where they will have the player pool of the selected day available to them to make a lineup under the eligible salary cap. This is no different from how you play on any other college basketball game.

How To Play DFS College Basketball 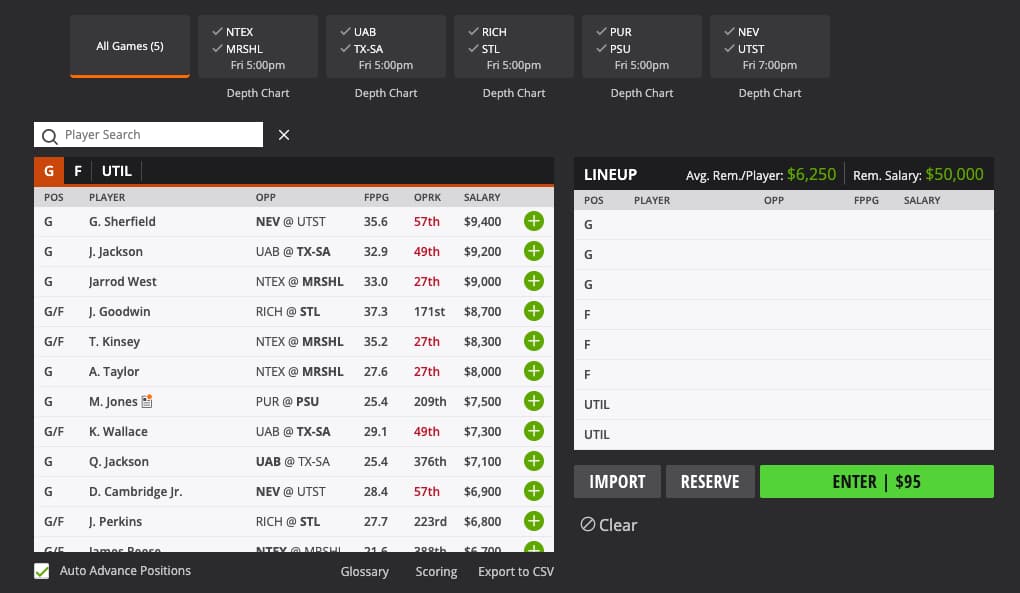 Strategies for qualifiers differ a bit from other styles of contests. This is a winner-take-all type contest, meaning you need to beat out the rest of the field to qualify for the big dance. That means taking some chances and trying to differ from the field. This doesn’t mean to just throw in every low-owned name possible but making sure you have a few low-owned players is going to be key. Adding players with a high ceiling is also crucial.

Since the goal is to hit the peak score, you are going to want to add in players that have a reasonable shot hitting their ceiling. This could be a combo of a strong matchup or they are seeing an increased amount of usage/minutes of late. Fading a chalky play is also an optimal strategy, in hopes that the player busts and the field have now taken a hit to their lineups while you avoided the player.