The Atlanta Falcons have a favorable fantasy schedule, facing the NFC East, AFC South, and their NFC South opponents. In fact 12 of their 16 games, they will face defenses that ranked in the bottom half in points allowed per game in 2014. Even though it is a transitioning period in Atlanta, given personnel changes, as well as roster stabilization, some things remain the same. The duo of Matt Ryan and Julio Jones will put up their share of numbers, while Roddy White chips in with his veteran presence. There are still some fantasy question marks for Atlanta, with no clear third receiver, as well as a split backfield.

Julio Jones - In 2014, Jones ranked third among wideouts in total targets, with 163, which ranked third in the league. He had nine games with double-digit targets, and is established as Ryan's go to wide receiver. It also helps having a still viable threat like White on the opposite side of him. He reeled in over 100 receptions for the second time in his career, and given his injury during the 2013 season, he would of likely had that mark as well. Pro Football Focus has Jones projected to be the second highest scoring receiver, behind Antonio Brown. 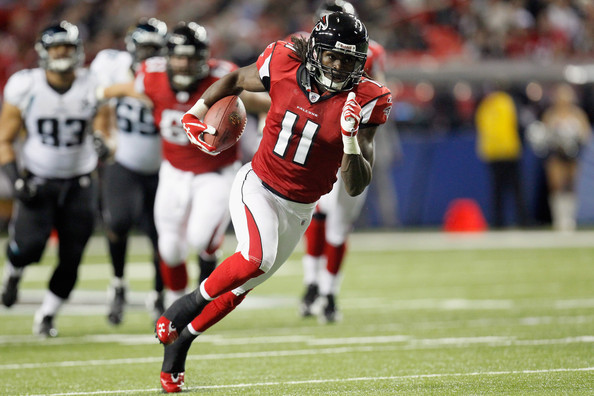 His only downside compared to some of the other top wideouts, is he only caught six touchdowns, which ranked tied for 29th with several others. I expect that number to be closer to nine or ten in 2015. Yards per game he ranked second in the league, with 106.2, and 15th in the league in yards per reception, with 15.3. The Falcons were one of the worst teams in red zone scoring attempts, with just 2.8 attempts per game. This led to only 12 red zone looks for Jones in 2014. For what it is worth, Jones is in a contract year, if you believe in the psychological presence behind that. He will be a cash game staple in my lineups plenty of times this season, and in certain matchups his QB and him will have quite the upside.

Matt Ryan - Only one quarterback threw more times than Ryan in 2014, his division rival Drew Brees. Ryan had a completion percentage comparable to Aaron Rodgers, and Peyton Manning. He ranked fifth in passing yards, but outside of the top ten in passing touchdowns. The Falcons cut Harry Douglas, who was helpful, but the void Tony Gonzalez left has not been filled. Ryan's fantasy price tag will be the dictator of him as a cash game or tournament quarterback for 2015. Eight out of the 16 games he threw one or less touchdowns. While his passing yards are through the roof, his passing touchdowns are on the level of Eli Manning, Jay Cutler, and Joe Flacco. None were safe cash game options for the most part in 2014. Even with Kyle Shanahan coming in as the offensive coordinator, and talks of running a bit more, Ryan and the Falcons should continue to be a pass heavy team. They are not quite built for a balanced approach. Due to projections having him below 30 touchdowns again, I can't see Ryan as a heavy cash game use QB in 2015. Due to a light opposing defensive schedule he will have his chances to shine.

Tevin Coleman - The first and second round picks were used on defense, which was a clear need, given they allowed the sixth most points per game. It was the third round when they drafted the stud running back from Indiana. Coleman rushed for over 2,000 yards in 2014, and combined for 28 touchdowns in his last two years at Indians. Nine games he had gains for over 40+ yards, and six for over 60+ yards. He is a speedster, who ran a 4.4 and a 4.39 40-yard dash at the combine. He does have some weaknesses, which scouts highlight as potential issues for him succeeding at the NFL level. While relying on his speed to burn Big 10 defenses, players are much faster at the NFL level. His ability to break tackles, strength as a runner, and backfield vision are below average. With Atlanta loving to stretch the field, and his speed will create boom-or-bust opportunities, he will have value as a GPP play for daily fantasy. His counterpart in the backfield, Devonta Freeman, makes him a riskier option due to splitting carries. This will be an ongoing situation that takes place in 2015, to see if one separates from the other.

The highlight of this offseason was the Atlanta Falcons hiring Dan Quinn and Kyle Shanahan. Quinn is more noted for the stud defense he managed in Seattle, while Shanahan is noted for his creative play calling and zone blocking scheme. Shanahan has three big components to the passing game, which will not take a hit with him trying to boost their rushing attack. If Shanahan has success with the run game at some point during the season, Ryan will benefit greatly. Opening up a play-action game would be huge for the Falcons skill players. This has been nonexistent over the last few years, and they relied on Gonzalez during that time for smaller chunks of yards. Another question is who will be the team's third receiver? They cut Harry Douglas in the offseason, signed Leonard Hankerson, and drafted Justin Hardy in the fourth round. Hankerson is only 26 years old, and has been off the radar in the Redskins' receiving core for the last three years. With Jones and White on the outside, it will be between Hankerson and Hardy to compete for the slot receiver role. A role that is desperately needed. Hardy is better in short yardage situations, and if a poor run game occurs, he could be put in a big spot for those 3-5 yard gains on second-third down.

With Jones being such a consistent play, and the only upside is more touchdowns for him, Ryan is the one to watch. With such a light strength of schedule, and an elite wide receiver, Ryan can potentially put up better numbers than projected. The addition of Shanahan as their offensive coordinator will benefit Ryan. Shanahan has had Robert Griffin III thrive under him, when healthy, and also Matt Schaub during his early years. I am truly excited to see Shanahan get his hands on this offense, which has been a top passing attack over the last few years. A more consistent Ryan can lead to his use in daily fantasy football.

I am ignoring what White has said in the offseason. He may think he will have a reduced role, but with no slot receiver or tight end emerging as a target for Ryan, White will continue to get his share of balls. He had 124 targets in 2014, which resulted in 80 receptions for 900 yards, and seven TD. He will turn 34 during the season, so age is going against White, but we have seen plenty of receivers thrive well into their 30's. Projections have not dropped off for White, he will hover around 75 receptions and 900 yards. If Ryan is projected 27 touchdowns, Jones and him will catch the bulk of them.

Due to the nature of the Falcons' schedule, they will be used quite heavily in both cash and tournament formats this season. Ryan will have plenty of value, depending on the week, if his price tag remains reasonable. He possesses the threat to erupt for 300 passing yards and three touchdowns from time to time, and their games have a tendency to turn into shootouts. The most useful and reliable play will be Jones, his week-to-week floor and ceiling is among the elite players in the league. Ryan-Jones will be a popular duo.
With uncertainty on the backfield, Coleman has the upside as a home run threat for GPP contests, while Freeman may have a rare breakout week. Even though White has steady season projections, he will likely be up and down week-to-week. A lot is going to be figured out as the season goes on, and they compare to the rest of the teams in the division. A few strong cash game plays, but surrounded by up and down tournament plays.