The Carolina Panthers, much like the rest of their division, have a favorable fantasy schedule in 2015, facing the NFC East, AFC South, and their NFC South opponents. They will face defenses that ranked in the bottom half in points allowed per game in 2014 in more than half their games next season. The Panthers basically had a lost season in 2014, with Cam Newton hobbled from the get-go with a rib injury in the preseason and it took him until basically the end of the regular season to be at full strength. Obviously, this is a concern for him with his playing style each season, but it would be nice to at least start the season fully healthy to make a run at things. They've built up the receiving core around him with young, talented pass catchers and this should be the year we can see with this Panthers core can truly do.

Cam Newton - As mentioned above, Cam Newton was hampered by a few injuries last year, most notably the preseason rib injury. It's very realistic to believe that this had more impact on his rushing than his passing, but I also can't imagine it's easy to throw a football accurately, in pads, with a helmet on, with broken ribs. I'm thinking there's nowhere to go but up. Just as an example of how it affected his rushing, in his first three seasons, he averaged 30 red zone rushing attempts, for an average of 3.0 yards per carry with nine touchdowns. Obviously those nine touchdowns are a little misleading because of the incredible 14 rushing touchdowns he scored his rookie year, but the point still stands. Last season, he had just 20 red zone attempts, down 33% from the averages mentioned previously, but still managed to score five touchdowns. I'd take the over on that five quickly assuming he heads into Week 1 healthy this year. 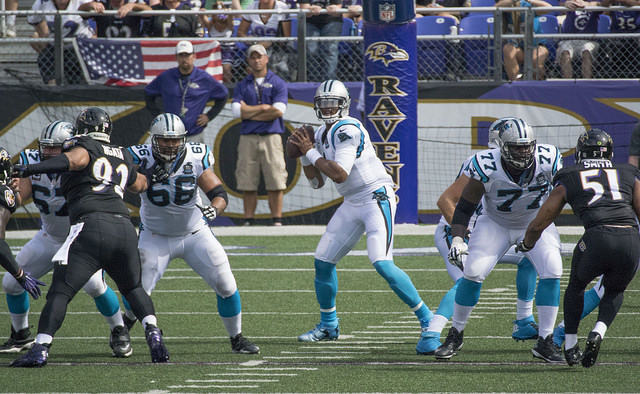 On the passing side, we know Newton has the arm and mobility to make any play he wants, but he's dealt with some accuracy issues. Some maybe related to injury, others probably not. His biggest issue last year was his lack of accuracy combined with Kelvin Benjamin's horrendous catch rate. Even in the red-zone, despite a pretty high touchdown total last year, Benjamin was atrocious. Benjamin was targeted 17 times inside the 20, with just four catches and three touchdowns. Even at a league average catch rate, those numbers could have greatly improved both of their seasons. The Panthers drafted Devin Funchess early this summer to improve the receiving core, most importantly in the red zone, giving Newton yet another big target to go with Benjamin and tight end Greg Olsen.

Greg Olsen - Olsen has become the most reliable target for Newton since he arrived in Carolina a few years ago. He's never become an elite fantasy producer because the Panthers simply don't throw enough, especially in the red zone. However, Olsen was one of the more reliable cash game tight end plays in DFS last season, racking up 84 catches, 1,008 yards and 6 touchdowns on the year. Look for Olsen to post similar numbers once again, with a potential rise in yardage if Newton is healthy for more of the season in 2015.

Devin Funchess - The Panthers used another early pick on a receiver this offseason and may have gotten one of the steals of the draft. Funchess was a little disappointing his final season at Michigan, but he was also dealing with some sketchy passers throughout that season. Funchess has been described as a receiver-tight end tweener, but it looks like he'll be used as a full-time wide out, possibly in the slot at times in his rookie season with the Panthers. Funchess offers size, solid speed and good route running that you don't often see from a man his size. He already has better hands than Kelvin Benjamin and that should make him a much more reliable red-zone target compared to those awful numbers from Benjamin we saw above. There are also reports of Benjamin being out of shape after this offseason, so Funchess has a very real chance to be the wideout to own in Carolina.

The storyline with the Panthers remains the same as always. Can Cam Newton be as good as he thinks he is over the course of an entire season and, most importantly, can he avoid injury all the way through the playoffs enough to carry his team to where they believe they should be and where he believes he can take them. The front office has given him all the weapons he can ask for at this point, having one of the most talented and physically gifted receiving groups in the entire league at this point. The Panthers have shown flashes of brilliance and this is the year they have to prove they can put it all together.

It only felt like 10 years, but DeAngelo Williams is finally out of Stewarts way. He's the clear-cut lead back heading into the season for the first time in his career and he showed flashes of what everyone was waiting for down the stretch last season. For the season he averaged 4.6 yards per carry on 175 attempts, totalling 809 yards and 3 touchdowns. He'll be able to rack up yardage and presumably catches at a much better rate than he has before due to a much higher snap count, but with Cam Newton eating up red zone chances, I wouldn't expect a ton of touchdowns, as DeAngelo Williams had just 10 red-zone carries last season total.

Much like Stewart, Tolbert's role in the Carolina offense will grow with Williams out of the way. He's more likely to pick up touchdowns than Stewart and has shown plenty of ability as a runner and pass catcher with both the Chargers and Panthers over the past few seasons. He's not going to be a weekly play, but Stewart has been injury prone in his career, so he could get a few lead-back opportunities this season when that happens, while stealing some third-down and goal line work even while Stewart is healthy.

Outside of Cam Newton, it's hard to play anyone on this team consistently and with Funchess entering the fold, there's not going to be a clear-cut first-option to stack him with in tournaments. Newton is a solid stand-along cash game and GPP play weekly, but the rest of the roster will be figured out as the season progresses. If the Panthers are better than their 8.5 win projection, Stewart could have a really nice year milking leads and turning in a long touchdown now and then with a lot of work. If they are worse than their win projection, we could see a ton of passing yardage racked up with Newton and his young receiving core, much like last season with Benjamin.

JasonG4s
Love Stewart this season, but RZ chances are his only downside with Newton and Tolbert.