Marvin Lewis is back as the head coach for what he hopes to be his lucky 13th season. He's led the Bengals to the playoffs in four straight seasons and five of the last six years. With Andy Dalton serving as the signal caller, the club has won 30 games over the last four years and promptly been dismissed in the Wild Card Round of the playoffs in each season. The AFC North produced both Wild Card clubs last year, so things should remain difficult within the division. The team's win total reflects an expectation of them competing for a winning season and another playoff birth, but at this point, the Bengals fan base has to want more than a Wild Card exit. 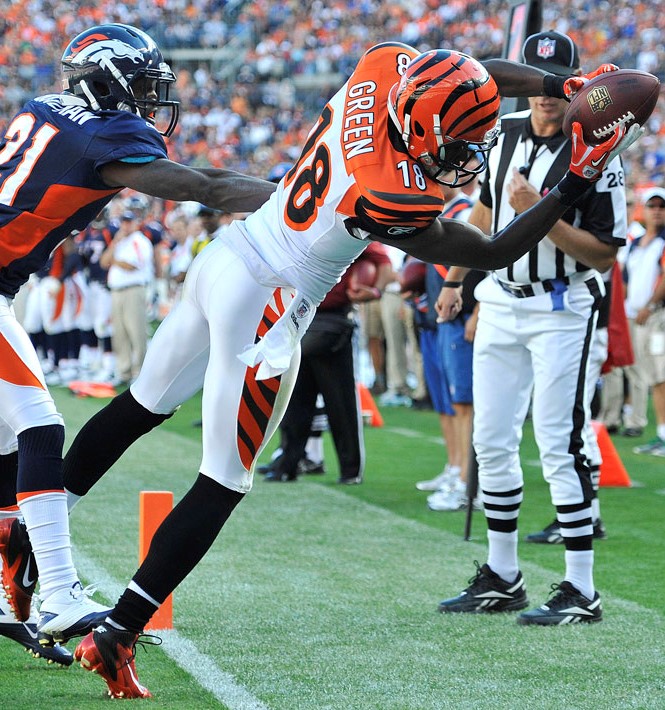 A.J. Green - Green has been the Bengals leading receiving all four seasons since they popped him with the fourth pick in the first round of the 2011 NFL Draft. His 13 games played last year marked a single season low, but he didn't allow it to prevent him from surpassing the 1,000 yard receiving threshold for his fourth straight season. He's caught 65 passes or more every year in the league, and he's a touchdown scoring machine with 35 in 60 games played.

Getting beyond the standard stats, Green checks one major box in the advanced stats column. Among receivers who received 25% or more of their team's targets, Green led all wide receivers with 2.96 yards per route run (YPRR), per Pro Football Focus (PFF). He was credited with 352 snaps in route by PFF. He was the only receiver to best 1,000 yards receiving with less than 400 snaps in route, and only five others cracked the 1,000 yard threshold with fewer than 500 snaps in route. He's an elite receiver, and he's the apple of Dalton's eye. Green was targeted 109 times, per PFF, 12 targets ahead of the second most targeted member of the team despite missing three games. Outside of playing with a good quarterback, you couldn't realistically want more from a stud wide out.

Jeremy Hill - Hill delivered an explosive rookie season totaling 1,124 yards rushing at a whopping 5.1 yards per carry. He was a tough runner to bring down, ranking tied for fifth in yards after contact per attempt at 2.8, per PFF. He was tied with fantasy studs Eddie Lacy and Arian Foster as well as fellow rookie Carlos Hyde. The LSU product was also quite fond of the end zone ranking tied for third with nine rushing touchdowns. Hill is a bell cow back who could carry the load entirely if the club needed him to, but unfortunately, he shares time with Giovani Bernard. Hill totaled 515 snaps while Bernard bested him with 524 snaps. Bernard isn't as talented a runner and he's more of a shifty change of pace, but 680 yards rushing is nothing to sneeze at. Bernard's real value is as a pass catcher, but Hill is no slouch in that department with 27 receptions and 215 yards receiving. Hill's skill set is well rounded, but unless Bernard suffers an injury, he will have to share some of the backfield load. Running back by committee situations are the norm in the NFL these days, though, making Hill one of the better backs in world of fantasy football.

Tyler Kroft - This is a stretch since Kroft has an uphill battle for targets. The team did spend a third-round pick on the tight end out of Rutgers, which is substantial draft capital. He's not a burner, but he's a big target at 6-foot-5 and 246 pounds, according to his NFL Draft Combine page. Kroft's college production leaves a lot to be desired, so it's difficult to envision him doing much in his rookie season. He'll also start the year behind young tight end Tyler Eifert, so barring some crazy circumstances, it's unlikely he'll help fantasy teams this year. The Bengals used their first two picks on offensive linemen, and they spent four picks on the defensive side of the ball. From a fantasy perspective, the 2015 rookie class for the Bengals is a real snoozer.

The Bengals signed Andy Dalton to a six-year contract worth $96 million last offseason, but the deal is backloaded in base salary with a declining dead cap number, so he'll need to prove his worth if he hopes to play out and receive the entirety of his contract. It's debatable as to whether he's led the club to playoff births in all four of his professional seasons or simply done enough not to sabotage playoff-caliber squads. In 64 regular season starts, Dalton has thrown for 14,758 yards, 99 touchdowns and 66 interceptions. Last year, he totaled just 3,398 yards passing with nearly as many interceptions, 17, as touchdown passes, 19. In the pass-happy NFL, his six games failing to best 200 yards passing in 2014 are unacceptable. Making matters worse, he had an almost unheard of five games in which he didn't pass for a touchdown. Advanced stats don't paint his work in a much more favorable light, and he'll need to take a sizable step forward if he doesn't wish to have his home crowd showering boos down upon him and the club looking to change direction at the position after the season.

Hill asserted himself as the better back in the one-two punch of he and Bernard, and the workload down the stretch reflected that. Over the last four regular season games and the Wild Card contest, Hill received 184 snaps and Bernard received 158. The disparity in carries was even wider Hill toting the rock 91 times while Bernard was awarded only 35 carries. Bernard will still receive work as a pass catcher out of the backfield and a change-of-pack back, but Hill will be the preferred back to own in DFS most weeks.

The notes in Hill's stock watch write-up basically reflect why Bernard's stock is down. As the smaller back, he's also less likely to get goal-line work. Making matters worse, the numbers above for the last four games and Wild Card include a hearty bump to Bernard's snaps played count as a result of the Bengals playing catch up in their playoff contest against the Indianapolis Colts (41 snaps for Bernard compared to 21 for Hill). Bernard will have some DFS value if he's priced right and facing a defense that struggles to defend running backs in the passing game, but after his promising 2013 rookie season, it's impossible to view Bernard's stock as anything but down entering his 2015 campaign.

The Bengals feature a truly elite offensive player in wide out A.J. Green, and Jeremy Hill appears to be one of the better running backs in the league, but one who will probably occasionally disappear as the result of sharing the backfield with Giovani Bernard. Beyond that, things aren't pretty. Andy Dalton is a completely unreliable signal caller and in need of a perfect matchup to even be considered for usage.

Lurking on the DFS fringes are Bernard, Marvin Jones and Tyler Eifert. The ideal circumstances for using Bernard have been highlighted above, leaving only Jones and Eifert to discuss. Jones and Eifert accounted for one game played in 2014 between the two of them. Jones missed the entire season due to injury and Eifert was healthy for only one game. Both were hoping to build on promising 2013 seasons. Jones reeled in 51 receptions for 712 yards and a whopping 10 touchdown grabs, while Eifert hauled in 39 grabs for 445 yards receiving and a pair of scores in his rookie season. Both players are completely healthy, and each could emerge as moderately useful options.