The Dallas Cowboys season ended on a controversy call that leads to the question - Did Dez catch it? Regardless of the outcome, the Cowboys had an extremely efficient offense, with monster seasons from DeMarco Murray, Dez Bryant, and Tony Romo. The offensive line was praised highly all throughout the season as the best in the league, which is why the Cowboys are comfortable with the backfield they have after Murray left town. The Cowboys won 12 games last season, and took the NFC East over the Philadelphia Eagles. 10 wins to hit the over is likely for this team, as they are still the best team in the NFC East, at least until the Eagles can prove they can play a whole season. Even with the subtraction of Murray, this will be a very relevant team in daily fantasy football.

Dez Bryant - The Dallas wideout had a monster season, hauling in 16 touchdowns, with 1,320 receiving yards. He had 138 targets, which was 12th in the NFL, and had 88 receptions. The 12th in targets ranking is a little odd giving him being a number one wideout in a highly efficient offense. With Murray out of the picture, the Cowboys are expected to divert some of those rushing attempts into Romo's arm. This may or may not give Bryant a bump in targets. Bryant was dominant in the red zone, catching half of his touchdowns within the 20. The 16 touchdowns will be hard to duplicate for Bryant, but he should hover around double-digit scores. 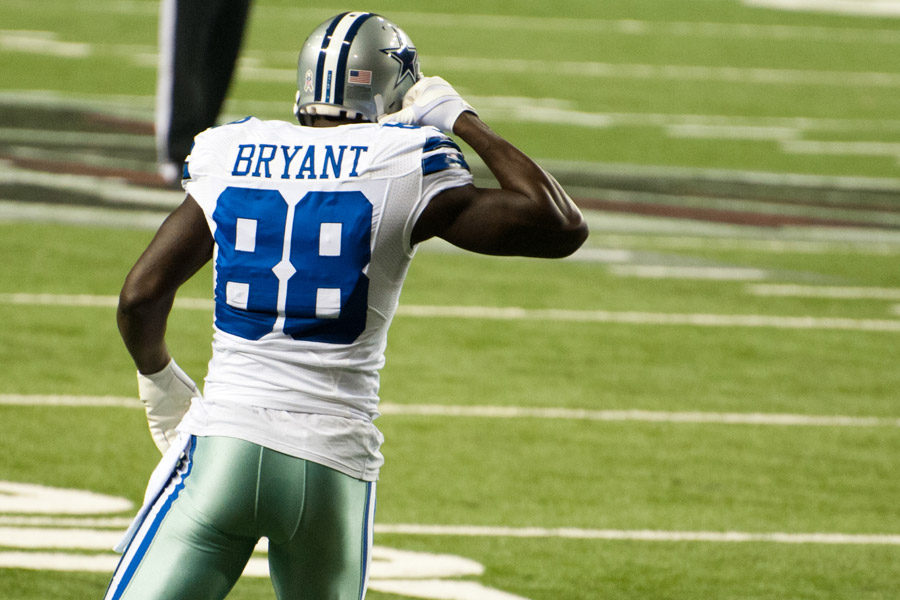 Bryant had 22 catches for over 20 yards, and averaged 82.5 yards per game last season. The Cowboys will be a lock for shootout games this season, which will increase the usage of Romo-Bryant. They will go hand-in-hand in daily fantasy, as Romo had the highest QB rating in the league, even edging out Aaron Rodgers. Going into 2015, Bryant is a top five wideout, and will be a top option from week-to-week. He had some matchups last season that created a "fade at your own risk," type of feel entering in lineups. This duo will continue to be elite plays.

Tony Romo - 113.2 rating for Romo last season, which topped the league. He had 34 touchdowns, which ranked 4th in the league. Romo had a workhorse back with Murray, which led to a diminish in passing attempts. He finished below guys like Kyle Orton and Brian Hoyer in attempts, but racked up the 14th most yards. I expect both those numbers to increase this season. While we don't worry about longterm injuries in daily fantasy, Romo is 35 years old with a history of injuries. The offensive line is the best in football, which will help him out, but he could be asked to carry a bigger load than last season. Romo is going to have plenty of wideouts at his disposal, as well as a top tight end target. He will likely be headed for a top ten fantasy QB finish, and he will create plenty of weapons week-to-week with the receiving core. Romo was a very consistent play last season, with 2.1 passing touchdowns per week, with 231 yards per game. Going into 2015 it seems like that will be a safe floor for him. The pairing with Bryant will be a popular play, especially in those shootout games. His WR2, Terrance Williams, will lead to a GPP play with the upside he showed late in the season.

The Cowboys will not be bringing a high profile rookie skill player to the DFS world this season, instead they focused on defense, which needed improvement. They drafted five defensive players out of eight draft picks. They even took a risk on another stud offensive tackle, La'el Collins, out of LSU. He was dealing with some character issues, and problems with the law, but the Cowboys may have added to their already stud offensive line. The Cowboys passed on a running back, did not draft a wide receiver, but clearly they feel those positions were not needed.

DeMarco Murray was the big story this offseason, and the Cowboys let him walk to their division rivals. For those who like the play the narrative street game in daily fantasy, Murray will lineup against his ex-teammates twice this season. As Terrell Owens said, "get your popcorn ready." Murray rushed for 1,845 yards, on 392 attempts, which was nearly 80 more attempts than the guy he is replacing, LeSean McCoy. He was tied for the league lead in touchdowns with Marshawn Lynch, both hit 13 touchdowns on the ground. The Cowboys added Darren McFadden in the offseason, but Joesph Randle is projected to be the starting back come week one. Another storyline has been the signing of Dez Bryant, or well lack there of. Always storylines with the Dallas Cowboys, but not many regarding fantasy worth.

Unlike season-long fantasy leagues, we don't have to worry about the Cowboys' backfield paying off in their ADP. Joesph Randle is expected to be over 200 attempts this season, and close in on 1,000 yards. He averaged 6.1 YPC last season, and it is hard to believe McFadden beats him out, as he posted a 3.3 YPC in 2014. Randle is going to get behind the best offensive line in the league, and look to build their reputation for creating better running backs. McFadden is still expected to get close to 125-150 attempts, which will cut into Randles' workload somewhat, but not enough for Randle to be a high risk play.

Terrance Williams had eight touchdowns, but six of them came in the first six weeks, and then he went quiet. Williams is a big play receiver, but will see more targets than your standard home run WR3. In 2015 look for Williams to be involved in plenty of GPP lineups, especially those pairing him instead of Bryant. Bold calls like that will set you ahead of the pack if they hit. He is ranked among guys like Kenny Stills and Nick Toon, which are similar comparisons of their involvement in daily fantasy football. With teams having to worry about Bryant on the other side, Williams will likely see plenty of balls his way over the course of the season.

The Cowboys may be missing DeMarco Murray, but they are bringing back a top offensive line, along with a dangerous Romo-Bryant duo. Joesph Randle seems more than capable of stepping in and performing as the Cowboys' top back. The trio of Romo, Witten, and Bryant will be cash game plays throughout the season, while Beasley and Williams will be considered contrarian plays. They have a favorable schedule, and many of these NFC showdowns turn into shootouts.

While the Eagles may get all the noise for offseason moves, and new toys for Chip Kelly to play with, remember the Cowboys have plenty of fantasy players with upside too. For what it's worth, the Cowboys have five primetime games this year. Those late Sunday night Dez touchdowns will shoot you up the leaderboard. It should be another successful year taking the duo in DFS.