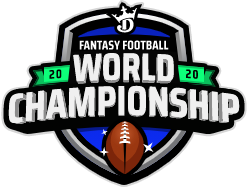 Draftkings is running a Fantasy Football World Championship with 12.5 Million dollars in guaranteed prizes. This is a two-tiered competition where you have to compete in a qualifying contest. If you win said qualifier then you head to the final during Week 15 of the NFL season. There, 200 players will compete for the grand prize of 2.5 Million dollars.

First, you will need to be in a state that allows daily fantasy games, be of legal age, and create a DraftKings account. Then you will need to verify your account and deposit money using a debit card, a credit card, PayPal, or any of the multitude of options that Draftkings allows. Once you have done all that you can move onto the next step of finding a qualifier.

The qualifiers will be running from Week 1 to Week 14. Each week there will be multiple competitions named “$12.5M FANTASY FOOTBALL WORLD CHAMPIONSHIP QUALIFIER”. You will need to enter one of these competitions to attempt to qualify. Then you will need to win said competition to earn a Fantasy Football World Championship ticket and advance to the next stage.

So let us breakdown the prizes. First, all qualifiers competitions pay out a $62,625 prize pool to the winner alongside their entry ticket into the final. Once in the final there will be 200 players competing for the $2.5 million grand prize for first place. However, every player will make at least $20,000. Click on the link to see the full breakdown of the $12.5 million of guaranteed prize money.

Whenever trying to qualify for a large event like this you need to get a little creative. You do not want to put together a safe cash lineup. You need to make bold choices with players that you feel can have dominant weeks regardless of price point. There are three things that you need to do to build a successful qualifying lineup.

First, a high scoring stack. A stack refers to a QB and WR/TE combo. The point of a high scoring stack is that you are doubling your points if the WR/TE has a huge day. Think Devante Adams and Aaron Rodgers during Week 1 of this season. Every single touchdown pass is 10 points, 4 for your QB, and 6 for your WR/TE. Hitting on your stack gives you a huge baseline of 60-80 points from two of your players.

Second, look for cheap value players who can have monster weeks. When looking for cheap value players in this format stay away from guys who are safe bets with low ceilings. A player set to get more of a workload than expected but is not an explosive player is the player you want to avoid. You want to look for the player who can end the week in the 20-30 point range, despite being a 3k-5k cost. WRs who have explosive abilities, good matchups, and an unexpected bump in role is one example of this.

Lastly, hitting on your expensive players. There is a reason that some players cost so much, they put up tons of points. Look for the players that you think are going to have the best weeks and add them to your roster. You want to build your team around explosive rather than safe plays.

Do not miss your chance at this life-changing DFS competition. Go out there and take your shot at qualifying for the Fantasy Football World Championship.