Welcome back to the Optimal Lineup post for DraftKings in the second week of the Playoffs. Down to 4 games, and likely the final week of Daily Fantasy goodness. The lineups still look solid and there are some tremendous players available even though we only have 8 teams to choose from.

The optimizer likes the two tight end strategy this week with Travis Kelce and Jason Witten. The Quarterbacks are Aaron Rodgers who will be hard to fade this weekend, and Dak Prescott who is also in a very good spot this week.

Either way, I wish everyone luck, and thanks for tagging along for the Fantasy season. I certainly hope the optimized lineups posts and other DFC content helped you succeed more often than not in 2016! 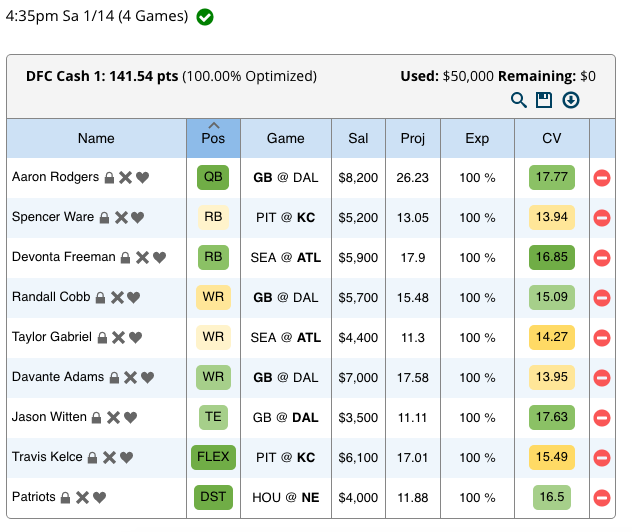 Rodgers is currently in the highest projected game total of the weekend with 52 point total. Green Bay is also favored to lose as well in Dallas. There is little doubt that Rodgers is playing as good as a quarterback humanly can and the Cowboys secondary is more than susceptible to a passing game. His last three games have been huge with 40.18, 37.2, and 33.48 DraftKings points.

Ezekiel Elliott is facing the Packers and their 8th ranked rush defense who are only allowing 93 yards a game on the season, this week. Make no mistake about it though if the Cowboys intend to win they will need to run on Zeke's back. Consider his last game in the vaunted Lambeau field and his accruing 157 yards rushing. He had 22.4 DraftKings points without a touchdown. Do not fear Green Bay's defense.

The other Running Back from the optimizer is Spencer Ware who is facing the 10th ranked rush defense in Pittsburgh at home. Ware has been beyond disappointing over his last three games with 7.3, 12.4 and 10.2 DraftKings points. His last game against Pittsburgh wasn't very reassuring either with only 82 yards on 13 carries and 5 yards on a lone reception. This is the playoffs though and Ware will certainly need to be a factor for the Chiefs offense to keep their passing game and the Steelers defense honest.

Taylor Gabriel is the unique receiver in the cash lineup so we will cover the others in the GPP section. Gabriel is an appealing play since Seattle's secondary has been vulnerable to the pass and will clearly have their attentions heavily on Julio Jones. With a recovered ankle Gabriel should be a sneaky play. The two weeks prior to Week 17 he had a touchdown in each game along with 6 targets. I would think more of the same target-wise could be expected and the hope he finds the endzone is an added bonus. He only comes in at $4,400 so hitting 3X is certainly possible with a higher ceiling if he can find the endzone.

The Tight Ends and Flex position are filled with two of the top 3 projected scoring tight ends in Kelce and Witten. Kelce is undoubtedly the best option remaining in the playoffs. Kelce is projected for 17 points, and had produced 100 yards in 5 of his last six games. His last game of the season was a clunker, but could have been expected as well. This game is simply too important to ignore their best offensive weapon and he should be in line for 8 or more targets as he had been in his dominant weeks.

Jason Witten is cheaper at $3,500 this week and typically a safe play for 2X if he doesn't get a touchdown. If he does however than he easily meets value most weeks. The Packers have one of the worst secondaries in the league (ranked 31st) and also have some significant injuries. Witten will likely be a key dump pass option for Prescott this week assuming the Packers will rely on pass rush plenty. 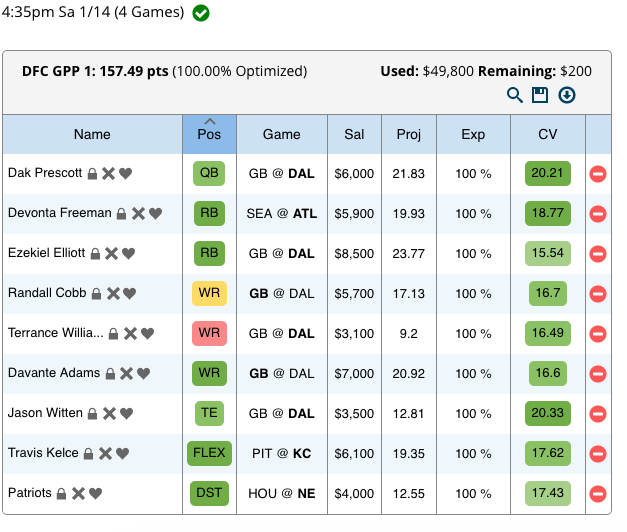 The GPP lineup pulled in Dak Prescott at quarterback and it makes sense facing the 31st ranked secondary in the league. Dez Bryant should be ready to do some significant work this weekend along with Ezekiel Elliott and even the lesser known Cowboys targets should be seeing plenty of action as well. Prescott put up 23.98 DraftKings points against the similair secondary in the Lions in Week 16. He is a lower priced quarterback as well so he may not be as highly owned, and allows us to upgrade from Ware to Devonta Freeman.

Freeman undeniably has a tough matchup at home against Seattle, but the potential in the high octane offense of Atlanta for a big play is always there. Freeman's ability to catch passes helps his value even if he can't surpass 100 yards on the field. his last game in Seattle he carried the ball 12 times for 40 yards and no touchdowns. Perhaps his huge game in New Orleans will carry over this week at home.

Randall Cobb and Davante Adams are the top two receivers along with Terrance Williams as the value play.

Randall Cobb came back from the darkness in round one last week to help scorch the Giants secondaries with some big plays on deep passes. The hope is he remains a big part of the attack this week against the 26th ranked Cowboys secondary. The concern and risk is here as he never surpassed 11 points in his previous 7 games.

Which leads us to Davante Adams who is likely the default number one now that Jordy Nelson is out. Adams has had 23 or more DraftKings points in three of his last 5 games and should see an uptick in targets this weekend. Although Cobb's game was big, Adams still had 12 targets and 120 plus yards against the Giants. Perhaps he will be overlooked this week….Maybe?

Terrance Williams is a cheap punt play who still has potential in the red-zone against the susceptible Packers secondary who may hone in on Bryant and Witten. All we need is a touchdown and 30 yards for Williams to hit value.