A quick review of Week 10's article, which was centered around Arizona and Pittsburgh. We saw Big Ben and Le'Veon Bell pay off alongside David Johnson. We then saw the Roethlisberger, Brown, Bell stack really pay off with Johnson and Larry Fitzgerald in the same lineup. Julio Jones didn't find the end zone, but had a successful day through receptions and receiving yards. Kendall Wright, Jordan Matthews, and Tyrell Williams were value receivers mixed in the lineups to find the end zone. The only area that the optimizer whiffed on was Lance Kendricks. 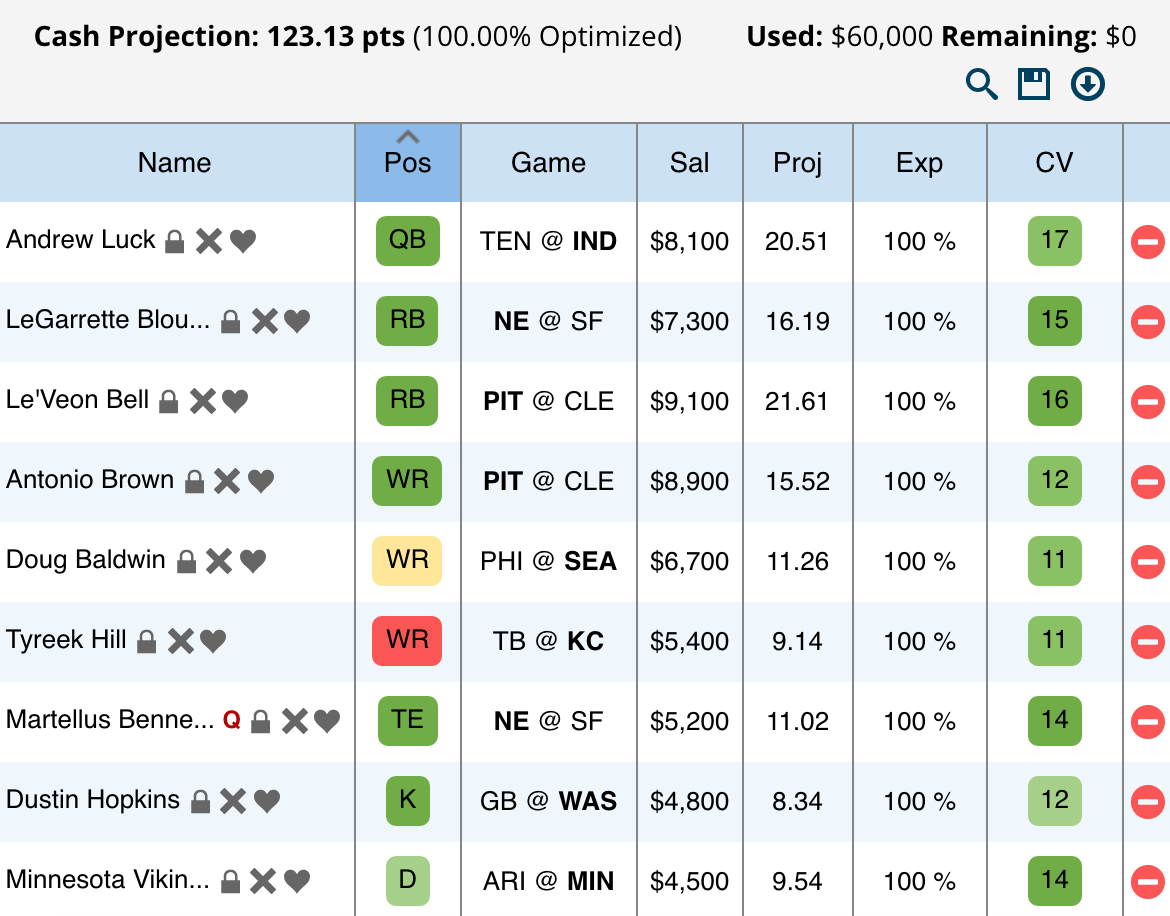 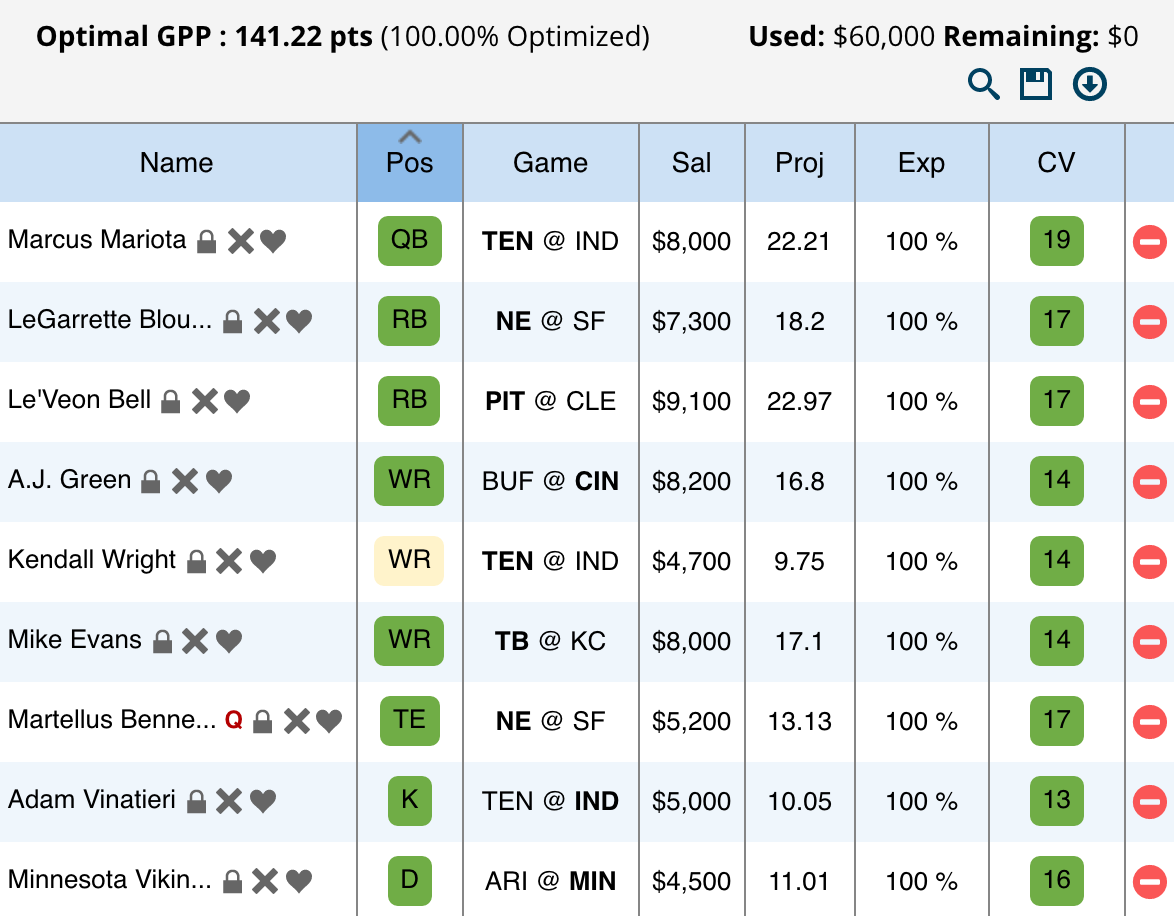 The two quarterbacks in this lineup I am certainly focused on for lineup building this week, given it's one of the higher scoring totals on the slate. Andrew Luck is a home favorite, and that might be why the cash game projection is drawn to him over Marcus Mariota. Both these teams have bottom ten pass defense, per Football Outsiders, and have been prone to allowing QB FD points.

These running backs are going to be chalky, yet the optimal GPP isn't necessarily worried about that. Cash games, this is a tremendous pairing, and one I won't necessarily will be fading. The 49ers defense has allowed the most FanDuel points per game to opposing running backs this season, and New England has the highest team total on the day. Oh, they are also two touchdown favorites. Cleveland isn't far behind as a bottom five rush defense, facing off against Bell. The Pittsburgh back is basically their second wideout at this point, so expect a safe floor, and enormous ceiling.

The cash game lineup chooses Antonio Brown as the expensive option to go with, as Cleveland ranks bottom five in DVOA against opposing WR1s. This sets things up a bit different for the GPP lineup, which goes with two expensive wideouts in A.J. Green and Mike Evans. I like Green against Buffalo, who rank dead last against opposing WR1s. Mike Evans should drop in ownership from last week, making him a low owned play against a tough Kansas City defense. Evans is a mismatch for most corners with his size. Kendall Wright is a boom-or-bust play to help alleviate some salary to get those two in. Against the Colts, I like his odds. The cash game lineup goes somewhat more balanced, adding in Doug Baldwin, who might be on the beginning of a streak compared to last year. Philly's defense has allowed over 20 points per game on the road, and have looked elite at home. With a healthy Russell Wilson, Baldwin is certainly in play at this price tag. Tyreek Hill has been a GPP play this season, and that's how I view him again this week, so cash is out of the question for my personal taste. Hill had ten targets last week, and broke out a solid game. This play really hinders on Jeremy Maclin missing again.

If Rob Gronkowski sits out this week, which is looking pretty likely, Martellus Bennett becomes a very solid tight end option in all formats. Bennett leads the Patriots in targets in the red zone, and red zone touchdowns. Both kickers this week are featured in Denny Carter's article this week, so I trust it. We get double the credentials backing these picks. I like Minnesota in a GPP sense this week. Cash games I rather use Kansas City. Minnesota will get a Arizona team, scoring 16.3 points per game over their last three. They are also turning the ball over two times per game on the road this season. 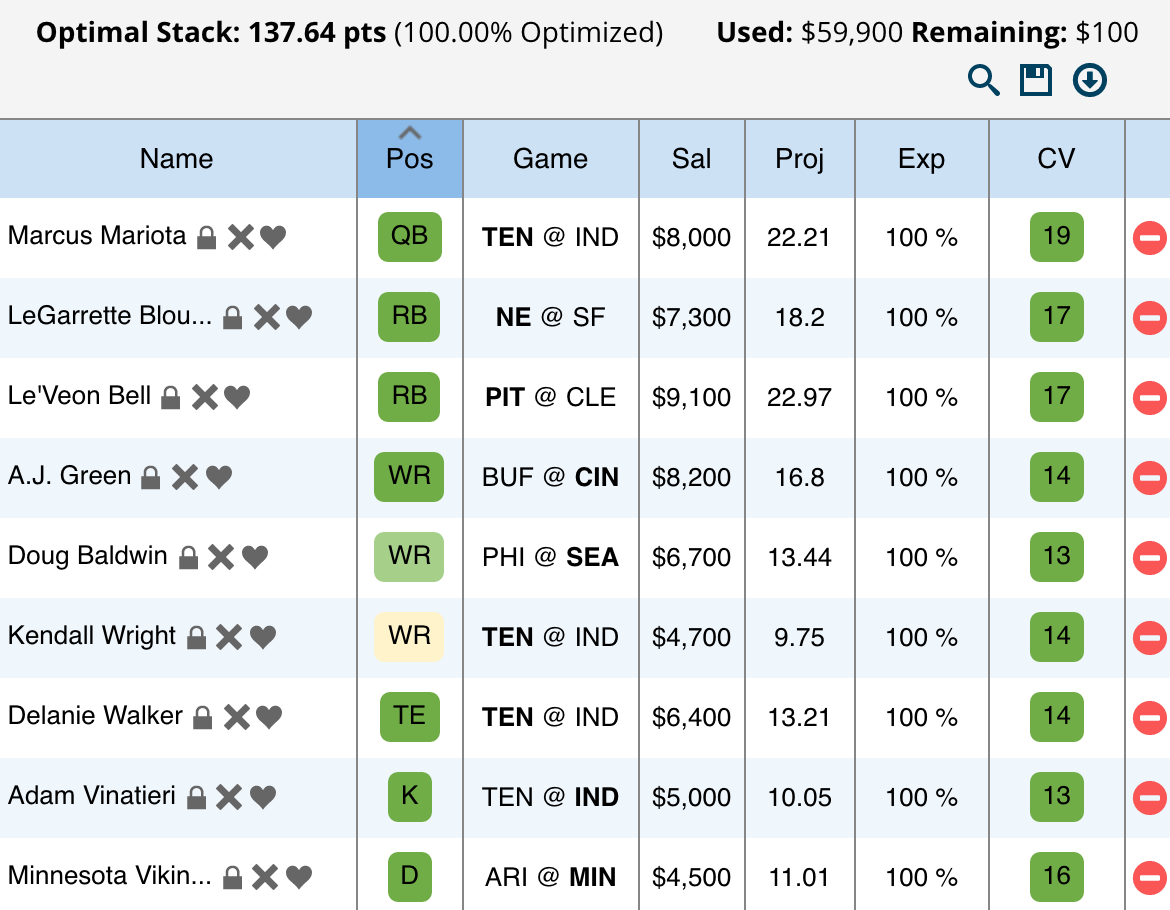 The Titans stack this week fits into be the most optimal. While the Titans sit with a reasonable 24.5 team total, which isn't the highest, you are getting exposure still to New England and Pittsburgh with their running backs. You are also getting a high upside play in Doug Baldwin and A.J. Green.

Mariota has been on fire of late, and the main pairing partner here is Delanie Walker, who is coming off of a big game against Green Bay. He went for over 100 yards and a touchdown. The matchup for Walker makes him a playable tight end in all format. The Colts rank dead last against tight ends this season, and have a DVOA near 40%. The Kendall Wright play makes this a cheap stack, and he is crucial for paying up for the other names. If you wanted a bit more consistent production from a Tennessee wideout, Rishard Matthews has been a solid value.