Week 11 had more misses than hits, and was a somewhat whacky week in general. LeGarrette Blount wasn't able to find the end zone against the Niners, and had a mediocre day when all was said and done. The one time he did find the end zone, it was called back on holding. Andrew Luck posted a very solid first half, yet collapsed in the second. Concussion to blame? A.J. Green went down very early in the game, killing the GPP and Stacking lineup within. The Titans calls were solid outside of Delanie Walker, who was one of the bigger Week 11 duds. The one area the optimizer did well in was using the value Minnesota defense. While they didn't look great defensively, the two touchdowns helped. Onto a shortened Week 12. 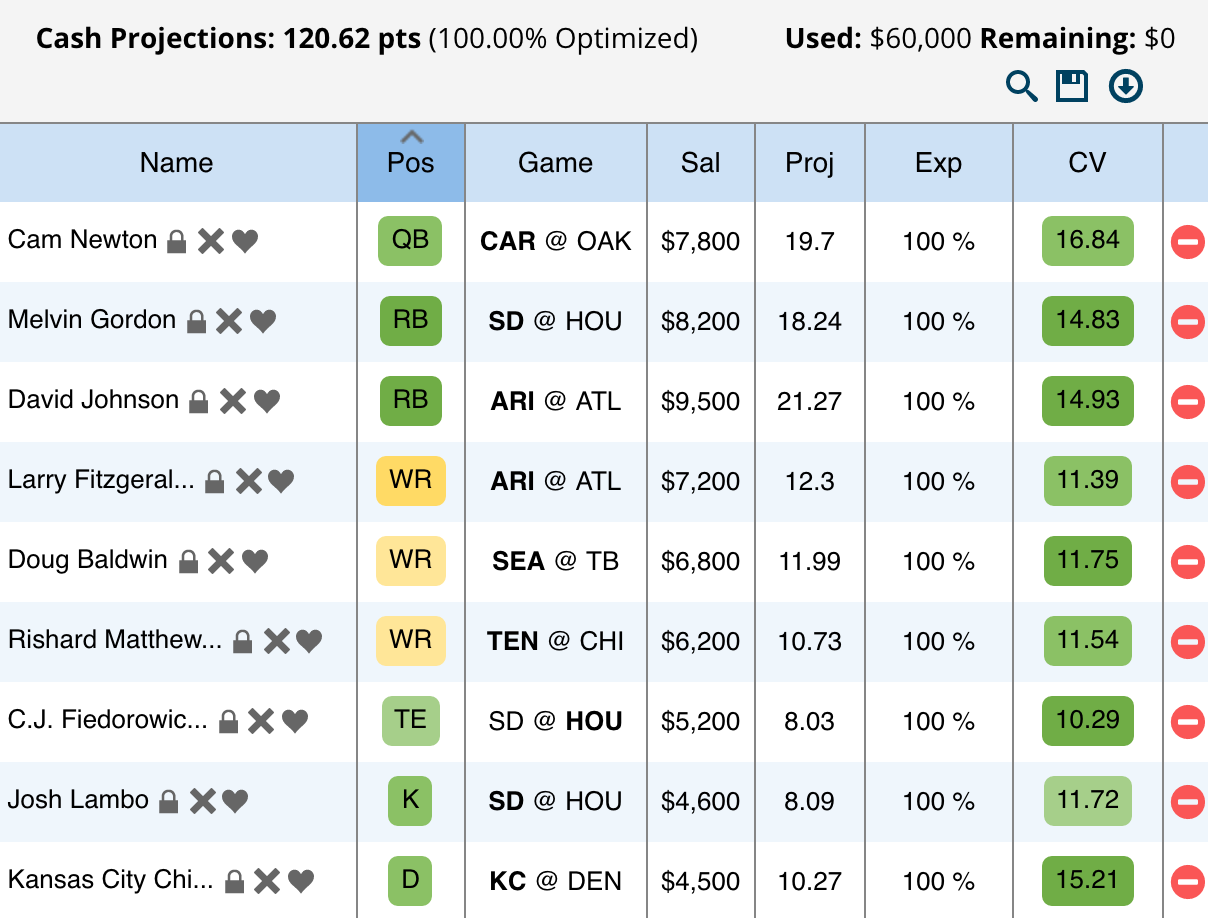 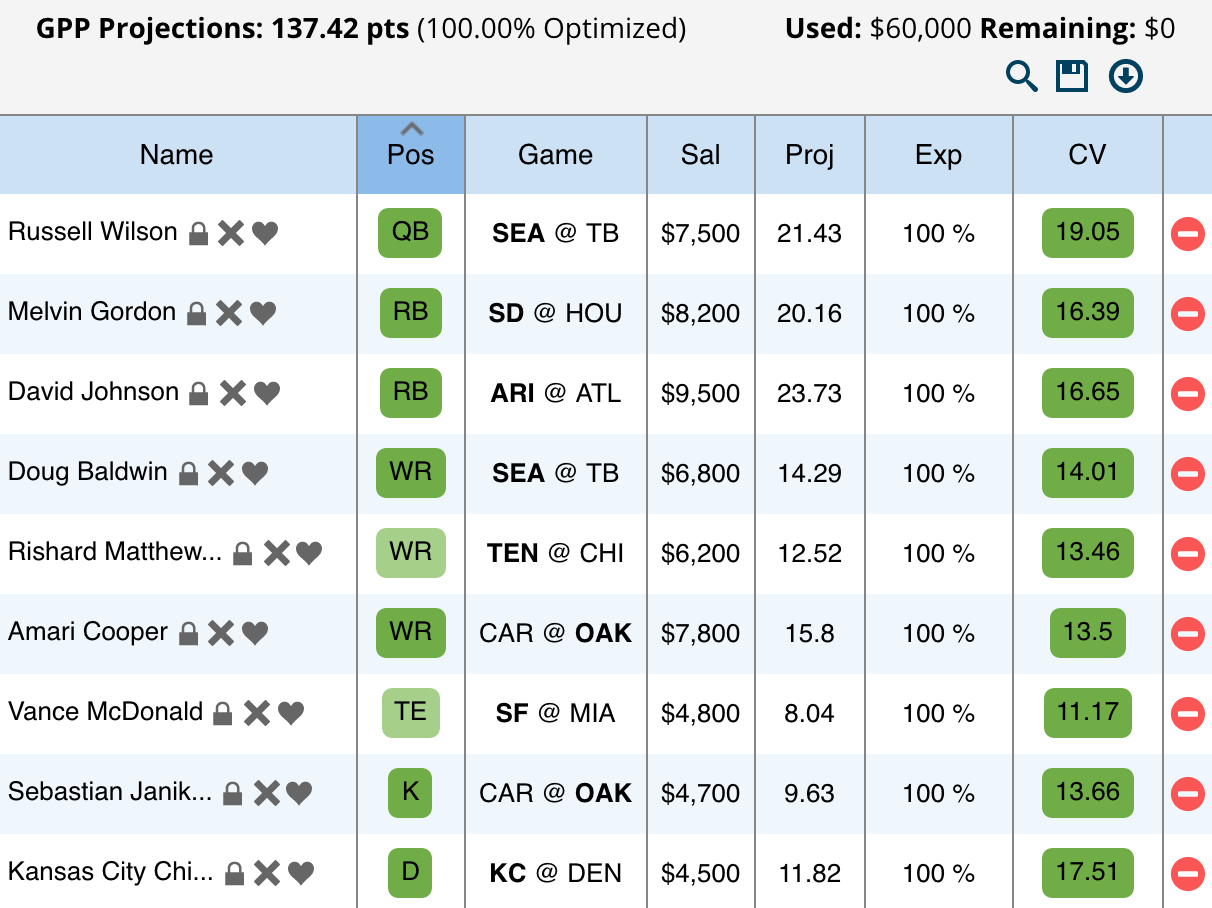 Diving into the quarterbacks first, if you have read my takes already on quarterbacks this week you know where I am headed. I actually prefer these quarterbacks to be swapped. I like Russell Wilson in cash games, and Cam Newton in GPPs. The Carolina offense has been a sputtering old car engine this year, while Seattle just took theirs in for a tuneup, and have come out firing over the last few weeks. Now the matchups are very solid, Oakland ranks 24th against the pass, and Tampa Bay ranks bottom ten in fantasy points allowed per game. Both teams are in a similar situation traveling across country, yet Seattle has the higher implied total. Wilson has been a better floor quarterback over the last few weeks ,and when healthy than Newton has. That's why only real gripe here.

No differences for the running backs between the two lineups, as David Johnson and Melvin Gordon find their way in. It is interesting that Jay Ajayi is not found given his matchup against San Francisco, but know he is an elite RB1 this week. Johnson and Gordon are both workhorse backs to deploy in all formats, and both have multi touchdown upside for GPPs, and a safe floor in cash games. Houston is allowing the 9th most fantasy points to opposing backs, and 28th against backs in the passing game. Atlanta ranks 24th against RBs in the passing game, and 28th against the run, per Football Outsiders. I love both this week.

It is hard to go wrong with these wideouts this week, and I love the price tags on all of them. We will start with two of the underpriced wideouts, Larry Fitzgerald and Doug Baldwin. Both are in plus WR/CB matchups this week, and are safe for targets. Baldwin averages seven targets per game, and Fitzgerald is averaging 10.7 targets per game, and has seen the third most among wideouts this season. Baldwin is paired up with Wilson in the GPP for that correlation, and is a really cheap duo. Rishard Matthews has seen a real uptick in usage for Tennessee, and is a reliable value at these prices yet again. Chicago ranks 17th against opposing WR1 this season, allowing over 70 receiving yards per game. We get to the high priced wideout now, Amari Cooper. With no Antonio Brown and Julio Jones seeing Patrick Peterson, things being to shift downwards. Carolina ranks 27th against opposing WR1s, with a 16.5% DVOA.

While Greg Olsen and Jimmy Graham are the main tight ends on the slate, the optimizer went with two of my personal values to be using this week. C.J. Fiedorowicz is certainly more of a cash option than Vance McDonald, so I agree there. Both have seen an uptick in usage of late, especially McDonald who has six targets in each of the last four games. Fiedorowicz has double digit FD point games in four of the last seven. The optimizer is taking a similar approach to last week using an elite scoring defense with a price drop in the Kansas City Chiefs. I prefer Baltimore in cash games, but like the Chiefs in a GPP format. 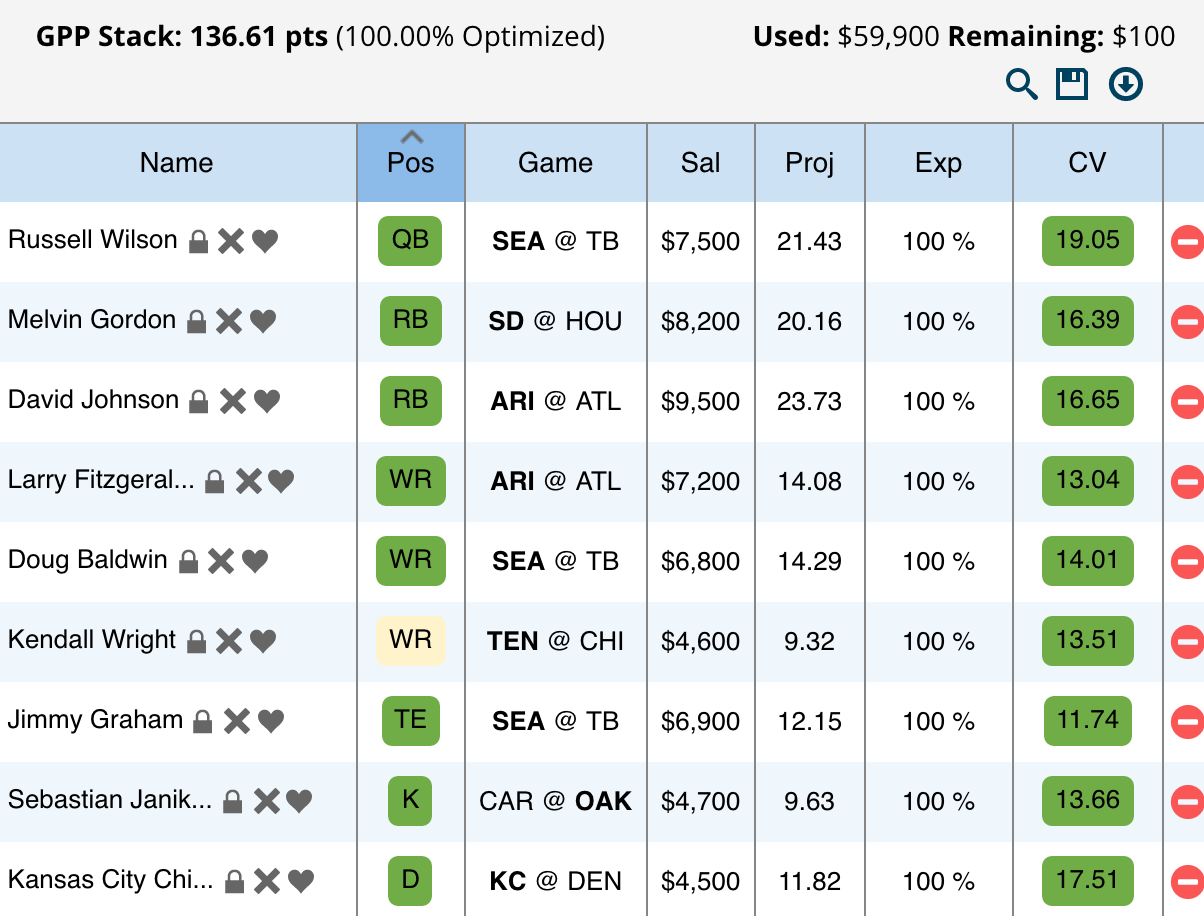 We don't see anyone new here pop up other than Kendall Wright, who is used for value purposes to afford Jimmy Graham. Without sacrificing at running back, I am okay with that move. This Seattle stack costs just $21,200, which is 35% of your salary. Definitely not bad given the touchdown production has been funneled to these names of late. Tampa Bay ranks 18th against the pass, and should cause Seattle to play with a bit higher pace as well. They have a 25.25 team total, and possibly a banged up backfield. Using two high upside backs and Fitzgerald also make this stack very appealing.