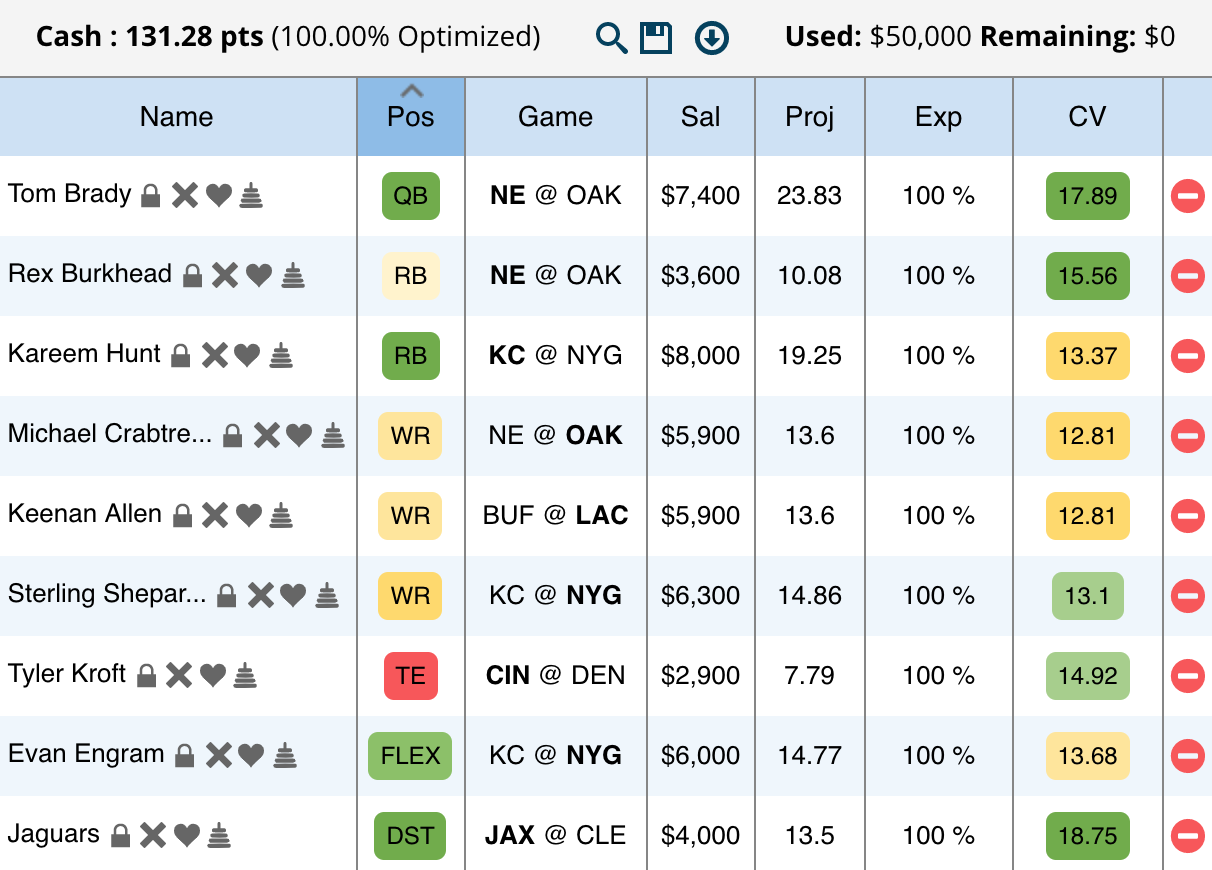 Tom Brady comes in as an easy pay up option, and with enough value on the board, it is probably a wise move. Oakland struggling pass defense should be shredded, even if it is in another country. Oakland has allowed the 9th most fantasy points to opposing quarterbacks this season. Given Brady has various weapons, it is tough to stack someone with him, although Rex Burkhead is in the lineup with him. Burkhead was used in some high efficiency roles, but I do not feel is a must play like some of the others around the industry.

Kareem Hunt should be able to get back on track this week, after some down performances in the fantasy department. The Giants defense has allowed the 9th most fantasy points per game to opposing backs this season, and rank 27th in DVOA. There isn't a clear cut number on RB, although Mark Ingram might be pretty close.

The WR core is not a bad one, although I do like Jamison Crowder as a discount from one of the names to bolster Burkhead to a higher volume back. This core brings a reasonable PPR floor to the table, and all three options are on my radar. New England is a good matchup for Cooper and Crabtree this week, while Sterling Shepard is a high volume target, and even at a higher price tag, he is worth it.

The two tight-end method is a reasonable one this week, although I was expecting Travis Kelce in here somewhere. Evan Engram is actually a slightly cheaper pivot up against a middle of the road KC defense. Engram is in line for 7+ targets this week, and New York should be chasing this one from behind. Tyler Kroft is in the second best spot of the weekend for tight ends when looking at fantasy points allowed. Kroft is a sub three thousand option, but brings a lower floor to the table.

Jacksonville's defense is one I want to pay up for this week. It is looking like a windy game with some potential snow. Cleveland turns the ball over often, and have lacked the run game to give any team a threat. With that being said, this Jags secondary should feast on Kizer.