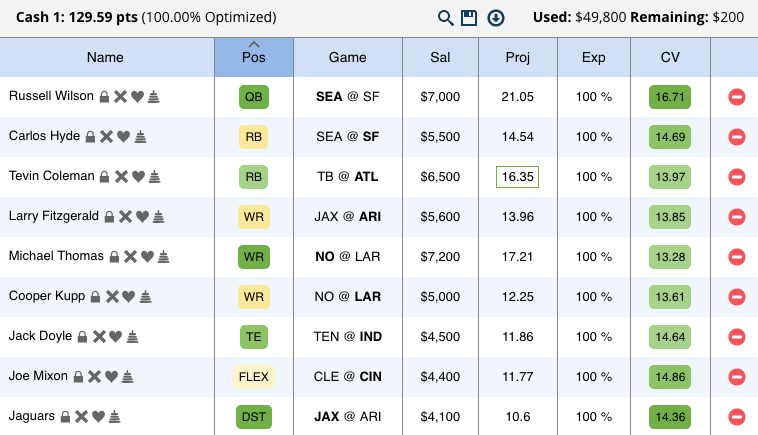 Russell Wilson comes in as the second highest projected QB this week, just a shade behind Tom Brady. The $700 difference looks to be enough of a savings to go him over Brady in actually all three lineups. Wilson is averaging 2.1 touchdowns per game over the last eight, and 0.40 fantasy points per snap. This is a great spot for Wilson to put up a solid game, as San Francisco ranks 29th against quarterbacks.

I found Carlos Hyde to be more of a tournament option this week, because the matchup is still pretty poor for Hyde. This is more of a volume play, hoping he can capitalize on that. Hyde is averaging 20.1 touches per game, and 1.08 fantasy points per touch. Tevin Coleman got a bump with Devonta Freeman ruled out for Sunday. Coleman should see 20 touches again this week, against a team that ranks 20th against running backs.

Larry Fitzgerald will dodge A.J. Bouye and Jaylen Ramsey this week, but this is still a tough spot against the number one pass defense in the league. Fitzgerald dropped down over $1,000 from last week, and is averaging 2.03 fantasy points per target. Fitz is averaging 9.8 targets per game. Michael Thomas is really propped up this week, and I am not sure why. His $7,200 is a little pricey for me, but is averaging 1.75 fantasy points per target. With Robert Woods out, Cooper Kupp is going to get a tick up in usage, and with New Orleans losing two corners, the Rams offense is a stackable one.

Jack Doyle is always a top PPR option when he is priced appropriately. Doyle is averaging 5.8 receptions per game, and 6.5 yards per target. Doyle is second in targets to Hilton, getting 24.5% of them. Joe Mixon is more of a game-script value than matchup, because Cleveland ranks 2nd in DVOA against the run. They haven't allowed a ton of fantasy production.

Jaguars defense is an easy pay up option this week, as Blaine Gabbert steps in against a good pass defense. Jags have one of the highest floors and ceilings this season.