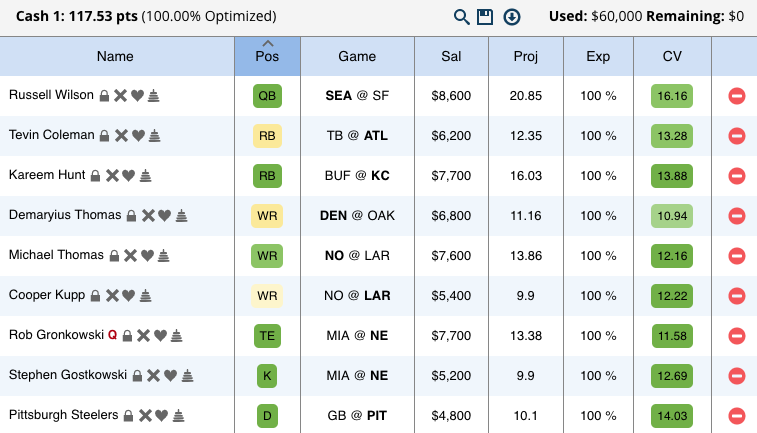 Russell Wilson seems like the unanimous winner across the sites for this week, going up against a team that ranks 29th against opposing quarterbacks. Wilson is averaging 0.40 fantasy points per snap this season. Wilson dropped a dud last time out against San Francisco, but his late season form is back again as Seattle fails to move the ball without Wilson.

We see a more solidified running back duo here as Tevin Coleman fills in for the injured Devonta Freeman, who is out this week with injury. At just $6,200, he is a tremendous option on the slate. Kareem Hunt's price has dropped down quite a bit due to the lack of finding the end zone, at $7,700, I am willing to go back to the well. The Bills defense has done a complete 180 agains the run, allowing the most fantasy points over the last five weeks.

Demaryius Thomas is on a three game touchdown streak, and is still under $6,800. Oakland ranks 20th against wide receivers, and Thomas is recording 24% of the targets for Denver. Much like DraftKings, Michael Thomas is here again, except at a little bit more reasonable price. Thomas is a tough sell for me in this spot, given he has a lack of upside. Cooper Kupp should see a tick up in usage and is in a good spot against backup corners for New Orleans.

Rob Gronkowski has been cleared for this week with an illness, and is in a good spot. Miami ranks 27th against tight ends. Gronk is averaging 2.23 fantasy points per target this season, and has averaged 7.3 targets per game. His teammate Stephen Gostkowski is on the highest implied total on the board. Pittsburgh is a great value with the Packers really struggling with Brett Hundley under center.