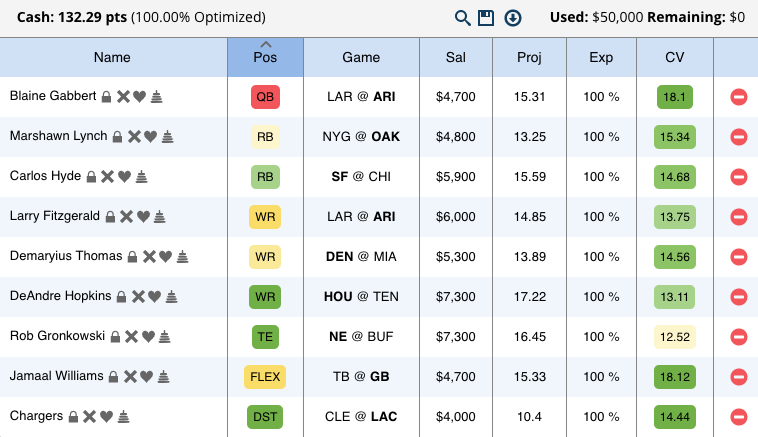 Week 13 is a weird week, and you can tell by sort of the stars and scrubs approach. We are also entering a week where we are invited to pay down at running back more than we have in prior weeks. No running back over $6,000 here, but it sort of makes sense. We get some cheap volume guys in Marshawn Lynch and Jamaal Williams, who are in positive matchups this week. Tampa Bay ranks 20th in DVOA while New York is 25th. Carlos Hyde is in a bit of a tough spot on the road this week against a Chicago defense that hasn't been bad at home this season. At $5,900 it's not that appealing of a price, but I get the logic.

We had some money to spend after the value backs this week, so WR and Rob Gronkowski was the moves made. Larry Fitzgerald struggled in the first game between these two, and I do worry about him again this week. Fitz should still see 7+ targets, and Blaine Gabbert hasn't looked all that bad in the two games under center. Hard to look at this connection as a cash game one, but for $10,700, it is one of the better Cafe Value combos this week.

Demaryius Thomas and DeAndre Hopkins both are in positive spots this week, but have negative quarterbacks throwing. Trevor Siemien back under center is better for Thomas, and we know Tom Savage is going to go to Hopkins. Despite the bad QB play, we should find them to pay off this week. The same goes for Gronk, who is a mismatch for any defense.

The Chargers have a home matchup against one of the leagues worst offenses. They are bottom five in sacks and turnovers, so Los Angeles offers up that huge floor and upside again. The only difference is we don't get a discount like the prior weeks.