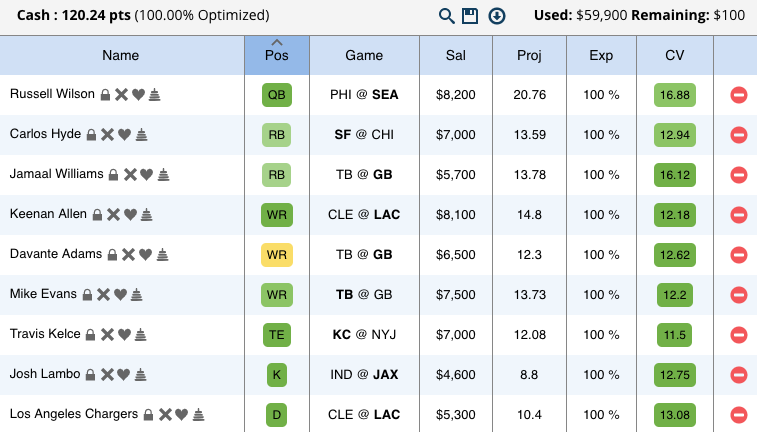 Russell Wilson continues to pile on the fantasy production, which isn't a surprise given the offense flows entirely through him. Philly has been a stout defense this season, but this game has sneaky shootout potential with the two offenses. With the volatile touchdowns in the passing game, using solely Wilson here with no stacking option is solid, especially given an $8,200 price tag.

Carlos Hyde is one I am on the fence on this week. He is cheap across the industry, yet I don't completely trust it in a road matchup against the Bears. The potential for touches are there, so I will give him that. I am more on trying to pay up or go down to a Marshawn Lynch over Hyde. Those are my personal thoughts, but hey if this is what is optimal. Jamaal Williams is going to be a popular value play this week. We are looking at 20+ touches against a team that ranks 20th in DVOA against the run.

Not much needs to be said about this wide receiver core. Keenan Allen against the Browns is a tremendous matchup to continue his play. Green Bay ranks 30th in DVOA against WR1s this season, and Evans getting Winston backs helps him out. Evans is underpriced by his standards, but is appropriately priced on his 2017 play. Davante Adams is cheap and clearly the WR1 in Green Bay with Brett Hundley.

The tight ends this week seem to be Travis Kelce and Rob Gronkowski as the Cafe favorites. Kelce is quite a bit cheaper than Gronk, so a economical savings was taken. New York are an average defense against tight ends. Denny Carter, aka the kicker master, told me to play Josh Lambo for cheap this week, and the optimizer agrees.

Cleveland are allowing a ton of fantasy production to opposing defenses, and the Los Angeles defense has taken advantage of great matchups the last few weeks. This will be another one.