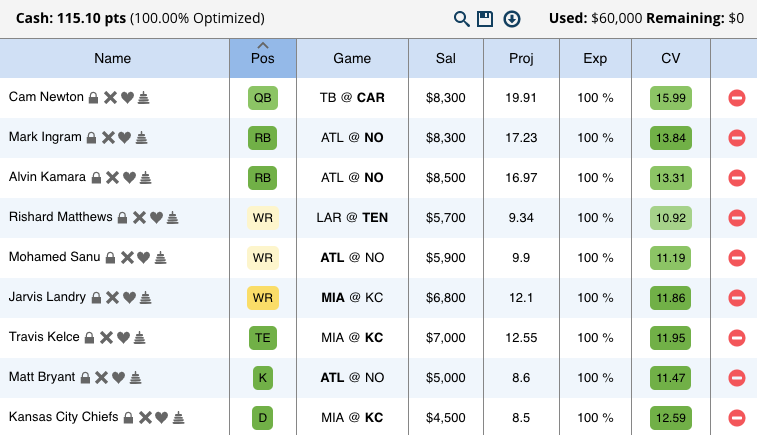 The FanDuel lineup always looks so pretty. We got the NO running back stack, and in this matchup is certainly in play. The New Orleans offense can sustain two high floor/ceiling backs, so you are not doing yourself a disservice by playing both. Atlanta struggles against pass-catching backs, and both can work well in the passing game. Their red zone usage is also on the positive side. With a huge implied total, New Orleans is a team I want a piece of this week.

Cam Newton is in a great spot again this week, as Tampa Bay ranks 29th in DVOA against the pass. The Panthers are another high total team to target this week, and I am surprised Greg Olsen isn't in here with him. That isn't a knock against Kelce either. Newton's running game has been ticked up in the second half, and has added to his potential outcome. At $8,300 this week, I love going here.

After starting the lineup with a few $8,000 players, skimping on wide receiver has to happen. Rishard Matthews has been hurt for the most part in the second half, but is coming off of a 6-95-1 line on eight targets. It is a tougher matchup this week, but at $5,700 you can make a case for him in this range. Mohamed Sanu put up a 6-83-1 line against the Saints two weeks ago, and has been a little boom or bust. I want to keep an eye on this Atlanta situation given both him and Jones are banged up. Both are expected to play. Jarvis Landry is more of a PPR guy, but has put up 14, 20, 8, 11, and 16 over the last five games. Kansas City allows the fourth most fantasy points per game to opposing wide receivers.

Travis Kelce is a great pivot away from Gronkowski this week. Kelce has 28 targets over the last three weeks, and Miami is allowing the sixth most fantasy points per game to opposing tight ends. Kelce has been a high floor/ceiling tight end this season, and is one of the higher projected tight ends this week.

No issue with Matt Bryant given the O/U of this game. Kansas City is a good $4,500 defense to target, as Miami allows the second most fantasy points per game to defenses in the last five weeks.