After what seemed to be a dreadful Week 5 for many, Week 6 looks promising based on matchups. We have eight games with totals over 45, and some prominent passing attacks in good spots. FanDuel optimal lineups went about where I expected them to go, with a lot of presence on Deshaun Watson, and other popular plays. With a lot of different directions to go, lets dive into it. 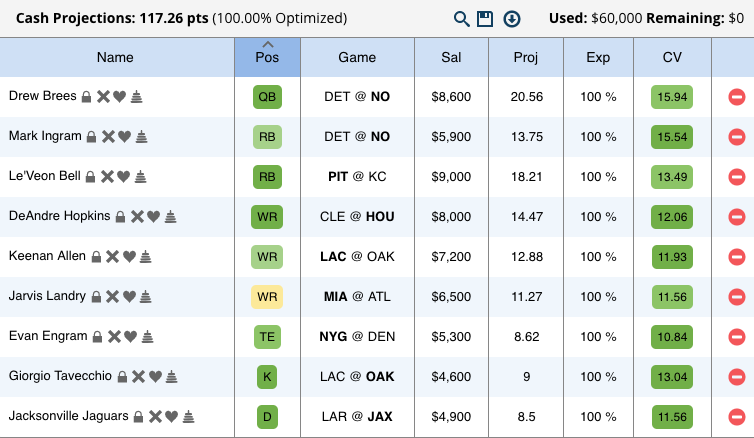 We get the same Drew Brees combo with Mark Ingram as we did on DraftKings, which makes plenty of sense given that total and matchup against Detroit who is missing some players. Ingram is dirt cheap, and allows you to get plenty of top tier options. We see Le'Veon Bell in here who doesn't need much explaining, but also a really strong receiving core. Back to the running backs, Ingram is set for a 15+ touch week, and works well in the passing game. Bell and more so the Steelers let a lot of people down, but Kansas City ranks 24th against the run, so maybe, just maybe they should take advantage of that.

Hopkins, Allen, and Landry are a very interesting duo, and I am hoping both Allen/Landry go lower owned, which I would imagine to be the case. Allen is in a good spot against Oakland's lackluster secondary, while Landry will see 10+ targets in a game where they will be trailing. I usually prefer him on DraftKings, but with Parker unlikely to play, I can see him being a primary target.

Probably not a place I am attacking is New York, but I guess if you are using anyone guy it is going to be Evan Engram. Fresh off of a zero fantasy point game, he is going to be a lock for targets given the injury situation in New York. Giorgio Tavecchio is a near bare min kicker in a good spot.

Jacksonville's defense is in an excellent spot if they can hold Todd Gurley, because this Los Angeles passing attack is no match for what the Jags are doing with their pass defense. They also have the most sacks of any defense this season.