Week 7 is an ugly at first glance type of week, but as you start to dig more into it you find some plays you like. This was my take on the week, but I do very much miss the Sunday night game on DK's Main Slate, especially this week. The optimizer likes that game, as you have or will see in the FanDuel article. When we look at the optimal lineups as a whole, we get quite a bit of differences when the projections change. Pivots are made to what will be a much smaller group of lower owned players. Premium access allows viewership to GPP and Stacking lineups. 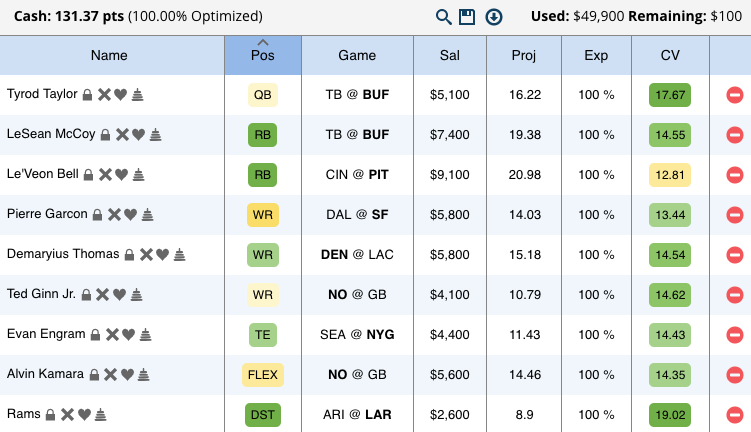 I was back and forth on Tyrod Taylor myself this week, and when it comes to plugging in two top end running backs, it makes sense to go cheap at quarterback as well. Taylor and Josh McCown were the two cheap guys, but the optimizer decided on Taylor. Buffalo is likely missing Jordan Matthews, and will be without Charles Clay, which is a bit concerning for a quarterback. One thing to note is that this week lacks a lot of high floor/ceiling quarterbacks, so going to the bargain route isn't a bad choice.

LeSean McCoy is my favorite running back this week, given he offers up quite a bit of a discount from the other big named backs, although the optimizer uses Le'Veon Bell with him. We are likely looking at 50+ touches between these two backs here. Cincinnati isn't a bad run defense, but Bell is a different animal, and has averaged 17.4 fantasy points per game against Cincinnati (5 games). Tremendous spot for both of these guys this week, and will be high owned options. Alvin Kamara is a good pivot away from Mark Ingram, who should be popular as well. Kamara gets enough touches to consider, especially on a PPR site. Green Bay ranks 27th in DVOA against opposing pass-catching backs.

The wide receiver core isn't entertaining by a name stand point, but when you pay up at running back, this is what you get. Pierre Garcon is actually one of my favorite wideouts this week, who is top ten in the league in targets per game this season. This San Francisco - Dallas game is actually one you can game stack. Demaryius Thomas is risky, but has a lone option in Denver with Emmanuel Sanders out makes him at least someone to consider. His floor is decent enough for cash this week. Ted Ginn isn't someone I am personally going with this weekend, but I understand the appeal against this Green Bay secondary.

Even in a tough matchup against Seattle, Evan Engram is going to likely be the leader in target share down the stretch for the Giants. It is likely going to be a weekly thing where he see 6+ targets a game, and I am okay paying the price even against the Saints. The Rams defense was a little bit of a surprise here, while I see the upside, it is tough to get them into cash game lineups here.