Just nine games on the Main Slate this week for DraftKings, as we feature a hefty bye week, a London game, and the SNF game no longer included. We don't have the Steelers options, which takes away Antonio Brown, Le'Veon Bell, and the D/ST out of use. However, we have plenty of high total offenses to target this week as New Orleans sits against Chicago at home, Cincinnati against Indy, and Philly takes on San Francisco in what should be a popular game to fire away with. Premium access grants you the GPP & Stack breakdown. 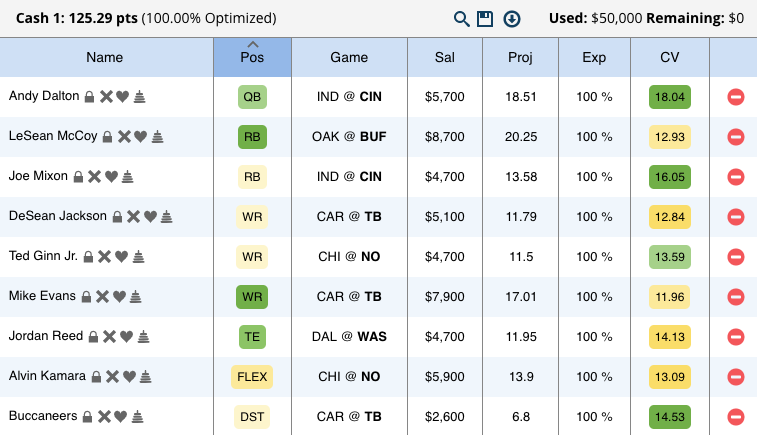 DraftKings is such a different approach from FanDuel this week, where you have the looks of a Pro Bowl team in your lineup without much trouble. DraftKings you have to make some uneasy decisions, and the optimizer made them for us of course. Andy Dalton is cheap, unlike Carson Wentz you is priced up this week as he should be. Dalton is the best points per dollar value on the board for DK this week, at least according to projections. I don't mind the idea of using his teammate Joe Mixon either. I mean Indy is bottom five in fantasy points allowed to quarterbacks and running backs this season. Marvin Lewis is really the only one who can deter Mixon from reaching value, but at $4,700 I will roll the dice.

LeSean McCoy is an easier pay up option here on DraftKings, as you could make the case for Ezekiel Elliot and Mark Ingram as well. Oakland ranks 20th in DVOA against the run, and 25th against pass-catching backs. Both exploitable areas for McCoy. He isn't the bargain we had last week. Alvin Kamara is a solid PPR back and a good pivot away from the more expensive Ingram. Kamara should see 5-6 targets in this game, with 8-10 rushing attempts.

Both Tampa Bay wide receivers find their way into the lineup here, which I was sort of surprised with. I like both options this week, even against an above average Carolina defense. This game is looking like a potential shootout, and Jackson/Evans have a pretty reasonable floor. Ted Ginn has busted out the last two weeks, but is still a volatile cheap option. However, at $4,700 I understand using him.

Jordan Reed is coming off of a huge MNF performance, and was back to usual snaps. Health is always the biggest issue, as one of Kirk Cousins' favorite targets has been in and out most of the season. Reed is still pretty cheap and viable this week against Dallas.

My personal take is to try and pay for New Orleans or Cincinnati in cash games, as for the Bucs you have to home you get a few turnovers off Cam Newton, which is possible this week. I don't mind the play at $2,600.