We have reached the halfway point of the season, and are continuing to see trends come and go. However, the trend this week is to pick on bad defenses, and the lineups sure do that. We have a ten-game slate on FanDuel, as many teams are on bye, as well as the London game. An overall look at this week, we have four teams over a 27 implied total, and six teams over 25. After a low scoring Week 7, things should pick up. Premium access grants you the GPP & Stack breakdown. 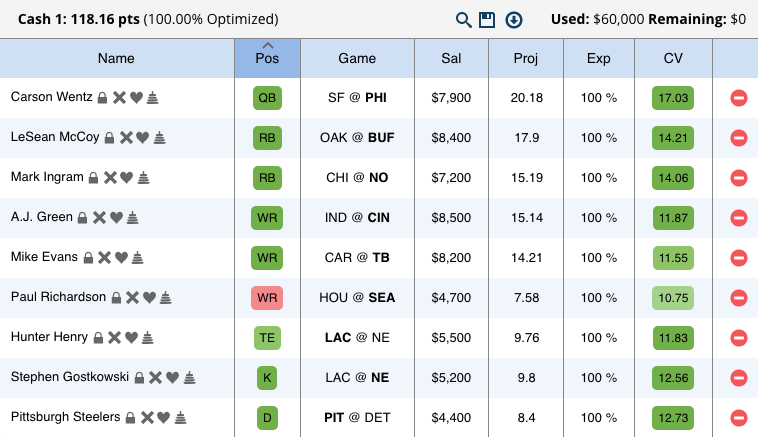 Hard not to like the Eagles in any sense this week, as they come in really cheap on FanDuel. While Carson Wentz is the only Philly player in the cash lineup, his stability makes the most sense to just lock and load. At $7,900 he grades out as the highest Cafe Value player, which doesn't take much explaining. Wentz will see San Francisco this week, who have allowed the second most fantasy points to opposing quarterbacks.

I wasn't expecting the Le'Veon Bell fade in cash games, but can't argue LeSean McCoy and Mark Ingram. Both are at reasonable prices this week, and continue to see hefty workloads. Expect around 50 touches between both of them, and a fairly high floor. The matchups are solid as well, as Oakland ranks 20th in DVOA against the run, and Chicago struggle on the road. Ingram should be an extremely popular play given the price didn't rise.

A.J. Green and Mike Evans are true high volume and high floor studs, and the LO sacrificed the WR3 spot to punt with Paul Richardson, who is coming off of a touchdown performance. He does have a low floor, but will be fine as long as Green and Evans can produce. Green sees Indy this week, who rank 20th in DVOA against the pass. The Panthers rank 24th in DVOA against WR1s. Richardson is in a tougher spot, but 5-9 FD points is where I would peg him.

Hunter Henry sits in that nice mid-range price on FanDuel this week, and New England allows the 8th most fantasy points per game to tight ends. Henry should see around 5-7 targets this week, and has been a high floor guy when on the field.

Stephen Gostkowski in a high total game at home is a no brainer if you have the cash, and the Steelers defense is underpriced for taking on a Detroit team that is lacking on the offensive side at the moment.