Week 9 has been a rollercoaster, and we haven't even kicked off yet. Ezekiel Elliot is playing this week, and Deshaun Watson completely changed the direction of this slate. The optimizer has adjusted quite a bit to this news, and takes advantage on come clear values. The overall theme this week seems to be paying up at running back, which makes sense when we look at some of the matchups. Before anymore news breaks, lets dive in. 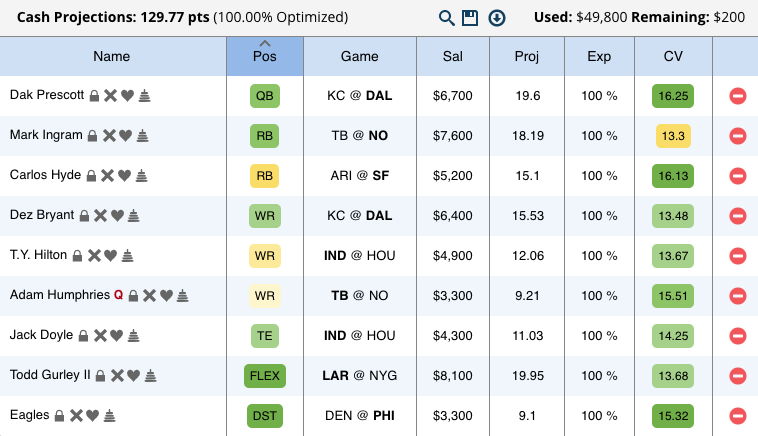 The cash game projections spat out Dak Prescott, and Dez Bryant, and this is with the news of Ezekiel Elliot playing. I am not really concerned all that much, because we have seen the trio of guys pick up enough to go around, especially in a matchup against Kansas City, who rank 20th in DVOA against the pass and 31st. against the run. I am very much okay with the two here, both below $7,000.

At running back, we are looking at three backs who can combine for 60+ touches. Volume is what we want, and the matchups are solid too. Arizona is the only team that ranks inside the top half in DVOA against the run, while Tampa Bay and New York rank in the bottom half of the league. All three can get PPR work, and fitting in all three is a core I like here.

My hesitation with the Colts is at a higher level now without Watson, where those garbage time points may not be as clear if Houston struggles with Tom Savage under center. I still like their values, and hard not to like these prices tags for guys who should see over 7+ targets this week. I think they will manage.

Adam Humphries was back at practice, and is a near punt option in a spot against New Orleans, but they have been good this season. They are top half in DVOA against WRs, and have been a team I don't like to pick on. Humphries may bring some PPR points to the table, but isn't a real threat in this offense. He is the piece that makes everyone fit in, but the floor is rather low.

Denver's offense continues to be slipping, and I doubt bringing Brock Osweiler in will fix it Philly at $3,300 is a fine option at defense this week.