Deshaun Watson and Ezekiel Elliot have shifted this slate in many ways. Houston-Indy now has 45.5 team total, while the overall pace for the Dallas game shifts with Zeke being back. We actually don't see a ton from either game in the optimal lineups this week, and I can understand why. Between FanDuel & DraftKings this week, it seems they are on the same page, which isn't always the case. Alright, lets break down Week 9 optimal lineups via the optimizer. 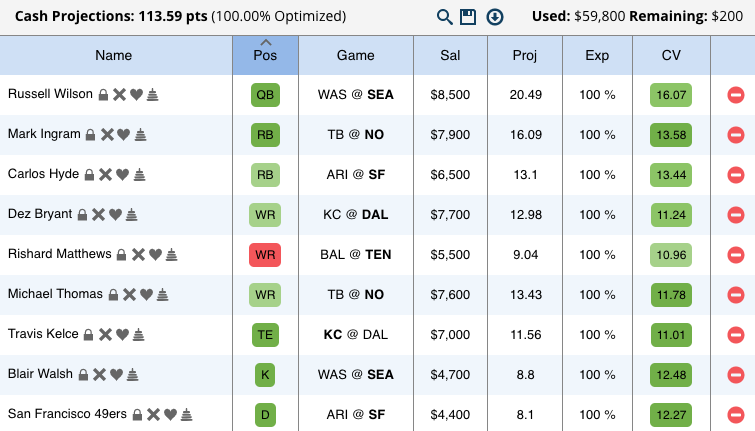 Russell Wilson is a lone dog at QB this week, and with Watson out for the rest of the season, we open our eyes to the rest of the quarterbacks on the slate. I am more than okay going the Seattle route this week, given their offense is reliant on Wilson's arm. The run defense of Washington is pretty subpar, but the Seattle rushing attack is even worse.

We see a pretty clear core for the LO this week, with Mark Ingram and Carlos Hyde, deciding to pay up at the WR position instead of running backs. That seems to be the difference between the sites. Ingram is still a top option, and might not even be expensive enough still given the workload. Because remember, he lost 4 FD points due to fumbles last week. Hyde I am not thrilled with, but understand the value and potential volume in this spot.

Dez Bryant and Michael Thomas are in great spots this week, as Tampa Bay and Kansas City both rank bottom five in DVOA against WR1s. Both are reasonably priced, and see 7+ targets per game. Rishard Matthews isn't somebody I am on this week, as Baltimore's pass defense is pretty solid.

Travis Kelce continues to be a top end option for KC, and at his price he is essentially paying up at another WR spot. Dallas ranks 29th in DVOA against tight ends, so Kelce is in a prime spot. The 49ers defense is a weird pick this week with all their injuries. I rather use New Orleans for $100 more.