The Chargers have won 9 games each of the last two seasons, and are coming off a disappointing campaign where they missed out on the playoffs for the 3rd time in the last 4 seasons. Philip Rivers led the NFL with 18 INT, and also with 22 total turnovers. Despite the turnover struggles, he managed to throw for 31 TD, which was good for 8th in the league, as well as being 10th with 7.52 YPA. After 11 seasons, center Nick Hardwick decided to call it a career, leaving a big hole in the Chargers' offensive line. The team re-signed CB Brandon Flowers to a 4-year deal, solidifying their pass defense in the process, as well as adding WR Stevie Johnson to shore up their thin receiving corps. Future Hall of Fame TE Antonio Gates will begin the season serving a 4-game suspension for violating the NFL's policy on PEDs. The team traded up in the NFL Draft to select former Wisconsin Badger Melvin Gordon, who finished his 2014 season with 2,587 yards, second only to Barry Sanders' 1988 season in college football history. The team is hoping that he can be the key to push this team back into the postseason for the first time since 2013.

Philip Rivers – Rivers has become one of the most consistent fantasy performers at the QB position since taking over the reins in San Diego, having thrown for at least 26 TD passes in each of the last 7 seasons, including 30+ in 4 of those 7. However, Rivers has had many peaks and valleys throughout his career, including 28 turnovers in 2012 and 22 last season. A lack of a consistent #1 wide receiver may be partially to blame for Rivers' struggles, as well as a plethora of injuries in the backfield, namely Ryan Matthews, who has missed 20 games already in his 5-year career. Inconsistent play from backup players has led to inconsistent performances from Rivers, making him a difficult target for many fantasy players. 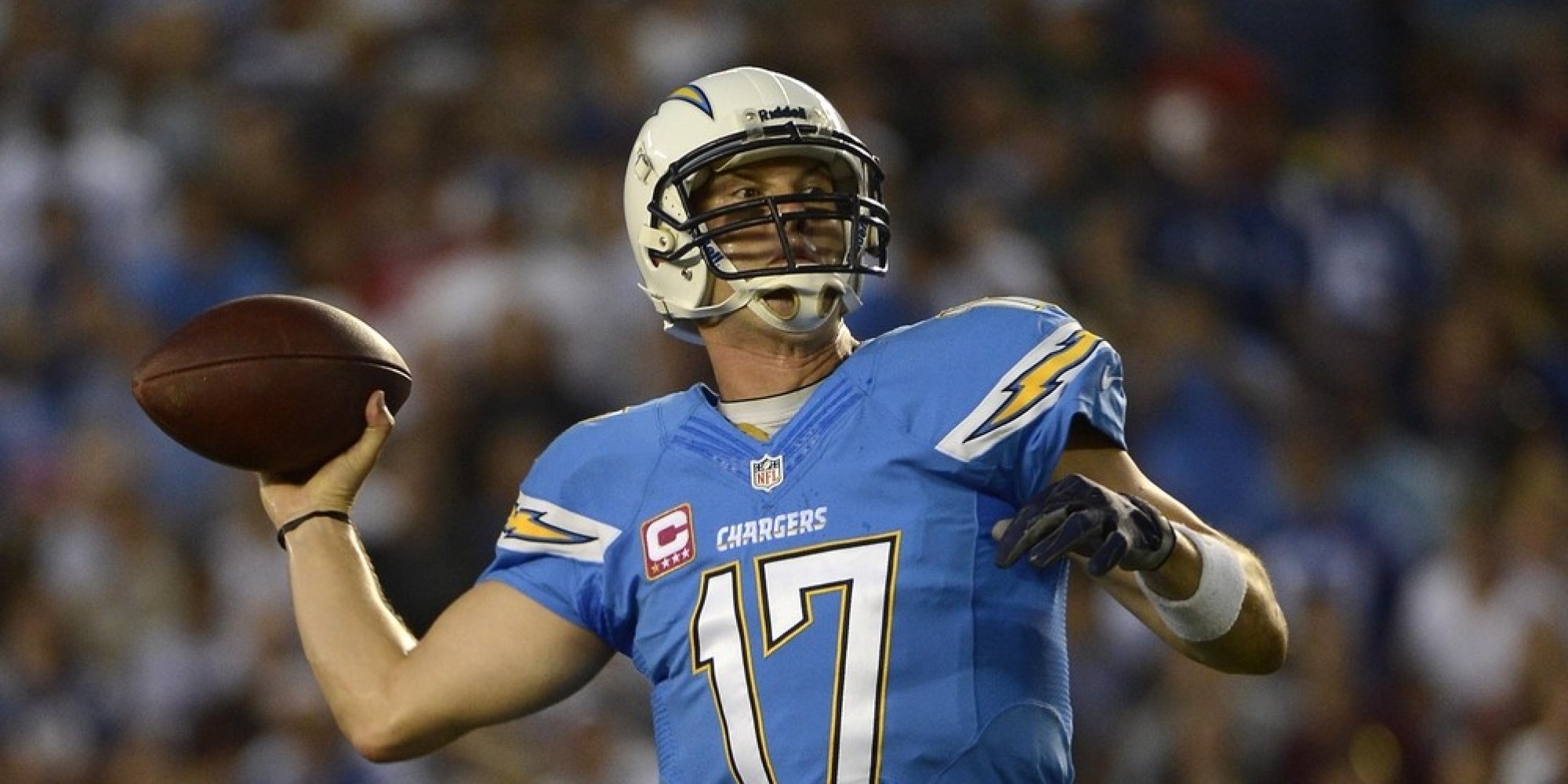 Pro Football Focus (PFF) has Philip Rivers ranked at the bottom of the 3rd tier of QBs coming into the 2015 season, which is right in line with his 11th ranked QBR (66.8) according to Football Outsiders (FO). He faced the 18th-most pressure (33.5% of dropbacks), and fared well in these situations, with the 7th-highest rating among QBs with at least 200 dropbacks in 2014. If Rivers can limit his turnovers and return to his 2013 form (32 TD/11 INT/ 71.7 QBR), he could be in line for a huge season with the addition of some new offensive weapons. He is a dark horse candidate to have a borderline top-5 season among QBs in 2015.

Antonio Gates – Coming off yet another impressive season en route to Canton, Gates caught 69 passes on 99 targets for 821 yards and 12 TD. The TD number was the second-highest in his storied 12-year career. According to FO, Gates ranked 2nd among TE with a 204 DYAR (Defensive yards above replacement), while tying Rob Gronkowski and Julius Thomas for the TE lead with 12 scores. Unfortunately for the Chargers, Gates will miss the first 4 games of the 2015 season while he serves a suspension for violating the NFL policy on the use od PEDs. In his stead, LaDarius Green may provide some upper-middle tier value in an offense that passed for over 4,000 yards last season. The Chargers will be in desperate need of a player to step up while Gates sits out, because despite solid passing numbers, they finished 17th in the NFL with just 21.8 points scored per game.

Melvin Gordon – Few running backs come into the NFL with as impressive a resume as Gordon's. His 29 TD in 2014 ranked 5th all-time in NCAA history, while his 408 rushing yards against Nebraska is the 2nd most in NCAA history (the record was broken the following week by Samaje Perine with 427). He steps into a Chargers offense that is in desperate need of a consistent rushing attack, having ranked 30th, 13th, and 27th in the last 3 seasons. Gordon will likely step right in as the starter for the Chargers and is expected to make an immediate impact.

As mentioned earlier, the Chargers' biggest weaknesses have been turnovers and lack of a running game. Adding depth at wide receiver in Stevie Johnson and trading up to select the 2014 Heisman Trophy runner-up Melvin Gordon should help alleviate many of those issues. Philip Rivers play will provide a solid baseline for how the far the Chargers can go this season in a tough AFC West division headlined by Peyton Manning and the Denver Broncos.
How the Chargers survive the first 4 weeks without their most consistent performer Antonio Gates will go a long way in determining their success in 2015. If LaDarius Green can step up in his absence and the Chargers can stay afloat against Detroit, Cincinnati, Minnesota and Cleveland, then they may be a playoff contender come January. If they struggle out of the gate, then the path becomes significantly tougher.

A DFS darling last season who never managed to live up to the hype, Green will finally get his shot at being the man at TE for the first 4 weeks of the season. He has reportedly “dazzled" in minicamps in the early going, and there is no questioning his physical skills. If he can build a rapport with Rivers in the preseason, then he may be a force to be reckoned with at TE, as least until Antonio Gates returns.

As an upper-tier TE, Gates would have been a popular target in season-long leagues, as well as DFS games week in and week out. However, a 4-game suspension may be an eternity for the 35-year old big man, especially with a legitimate contender emerging in LaDarius Green. He may struggle to maintain last year's snap counts if Green performs in weeks 1-4.

As we all know, this offense comes or goes on the right arm of Philip Rivers. If he once again looks like 2013 Philip Rivers and can limit turnovers, then this offense may provide some firepower. Gates' suspension will open the door for LaDarius Green to showcase his talents, and he will likely be a popular play at a thin position in many DFS contests. Melvin Gordon will be relied on to make an instant impact this season, and may be just the guy that San Diego needs to move on from the recently departed Ryan Mathews.
Keep your eye on Malcolm Flyod, Stevie Johnson and Keenan Allen as they all have some value in this offense, but it will be interesting to see if any of them emerge as the top option for Rivers. All in all, this will be a fun team to watch, and this offense may actually provide some sneaky value plays in your DFS contests in 2015.

JasonG4s
The Gates suspension finally opens a window for Green to make some noise!