The Buccaneers haven't been a really good team in a while and depsite drafting No. 1 overall this summer and selecting quarterback Jamies Winston, don't expect that to change any time soon. The Bucs have been a run-heavy team recently, despite not being an effective running team. With Winston in the fold, there's hope that changes this season as the Bucs sport one of the more exciting young receiving cores in the NFL. Their defense is another issue entirely, but they do have some talent on that side of the ball that should continue to develop with their young offense. It won't be pretty from a wins perspective this season, but there is some hope for the future in Tampa. 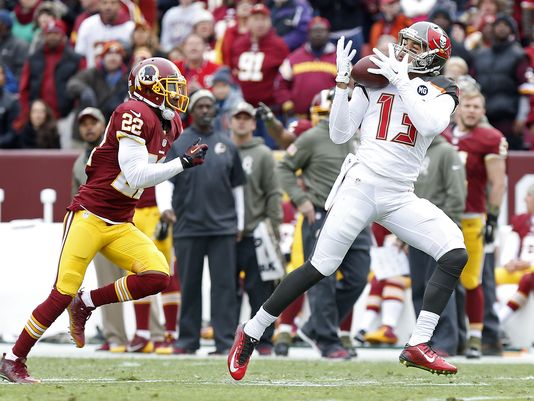 Mike Evans - Evans emerged as the Bucs No. 1 receiver last year, surpassing the maddeningly inconsistent Vincent Jackson, on his way to a 12 touchdown season as a rookie. Overshadowed by only Odell Beckham, Evans quietly posted one of the most consistent receiving seasons by a rookie recent memory. He'll likely have to deal with more double coverage this year as teams key on him more as the top wideout. He'll have rookie quarterback more likely to stare him down than a veteran one though, so his targets could be massive. Winston brings concerns, but it's not like he was playing with an All-Pro at the position last year and Evans possess all the physical tools to be dominant for a long time at the position.

Doug Martin - This is a contract year for the rollercoaster of a running back, so he should really be motivated to secure one last solid contract at an increasingly young running back position. Martin, however, hasn't had a solid statistical season since 2012. Martin hasn't shown much of the upside we saw that season over the past two and while he continues to be publicly named the starter by the Bucs coaching staff, he'll have to fend off the younger and more explosive Charles Simms all season to keep that spot. Martin's best assets remain his hands and blocking prowess in the passing game, so he should dominate passing down work either way. With a rookie quarterback in toe, he could rack up a ton of catches on check downs, especially in the season's early weeks.

Jamies Winston - The Bucs drafted 2013 Heisman Trophy winner Winston with the No. 1 overall pick this summer and will be counting on him immediately to be the engine that makes their offense go. Winston has off the field issues, but few have questioned his talent on it. The problem here is that the Bucs haven't surrounded him with a great supporting cast quite yet outside of wide reciever. Their offensive line was one of the worst in the NFL last season, allowing 52 sacks and accruing the 29th most rushing yards in the league. Winston should help both of those numbers with his pocket mobility, but he's nowhere near what we'd call athletic to create yards on his own. The big thing Winston does have going for him is an insanely large group of targets in Mike Evans, Vincent Jackson, Louis Murphy, Kenny Bell and Austin Seferian-Jenkins. Each of whom stands well over 6 feet tall. He's still going to need to hone in on his accuracy, but that group with the added receiving ability of Doug Martin out of the backfield should allow him to put up numbers even if the team struggles overall.

With a lack of offseason moves outside of the draft, it's obvious the Buccaneers are rebuilding with youth. Their offense, especially at quarterback and receiver, is very young. The only real question mark they have is at running back, with Doug Martin trying to revive his career and hold off the younger Charles Simms. The Bucs should be going pass heavy in order to develop their younger players, but they've seemed stuck in smash mouth football for far too long at this point. Should their defense falter again as expected, look for them to rack up a lot of passing yards.

Jenkins should take another step forward this season as the team's top tight end once again. He emerged a bit into that role last seasons, but was simply too quiet to get too excited about. With a rookie quarterback in toe though, Seferian-Jenkins could pick up quite a few targets in short yardage, especially if he can gain the trust of Winston in critical situations. ASJ offers ideal size at 6'7" and has done an admirable job blocking and has added weight in the offseason to improve in that aspect as well.

With the emergence of Mike Evans, especially in the red zone, Jackson really fell off towards the end of last season. He's always been inconsistent, but that is exactly what cost him the red-zone trust of his quarterbacks last season. I don't see him improving in that category going forward and with Kenny Bell in the fold as a rookie, Jackson is likely trade bait in the preseason and as we approach the trade deadline during the NFL season.

Tampa Bay's fantasy and season outlook truly come down to the play of their rookie quarterback, Winston. If he looks like a No. 1 pick, things could definitely be interesting with their talented receiving core, but if he struggles as we've seen some other your talented quarterbacks do in the past, it could be a long season for everyone in Tampa. Their defense isn't going to do them many favors either as at best they are likely to be a middling unit, but being behind in games often could be good for the team's passing statistics in the fantasy world.