You are viewing a daily MLB post featuring two lineups from our optimizer. An optimal 4-man stack has been included in each, and the optimizer was ran as is. Alongside the lineups, I will list some general info about the matchups and thought process of what was optimized. Feel free to comment or fire away with questions and be sure to check out our daily MLB content on the site. 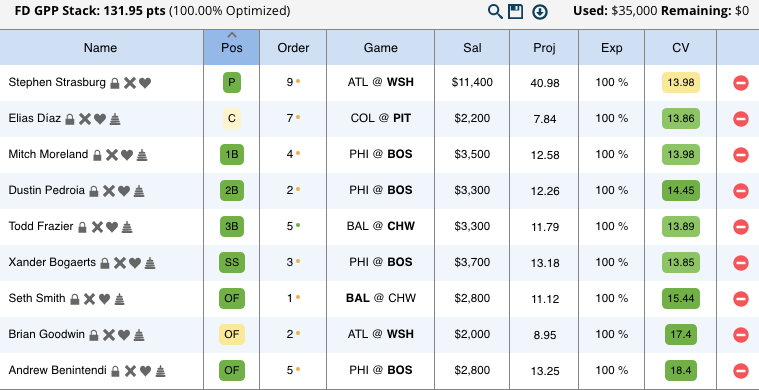 Boston has the highest implied run total on the slate, and are all fairly cheap on FanDuel. This isn't a real surprise given they always project highly, despite the average offensive showings. Against Eickhoff I don't mind it tonight, but I am much more inclined on taking the lefties in this one than the right-handers. Eickhoff is allowing over a .350 wOBA to lefties this season, which has been a career issue as well. Being able to stack the top pitcher on the board with the highest team run total stack doesn't happen as easy often, but the cheap punts help. The one-offs in Todd Frazier and Seth Smith are targets I am fond of this evening. 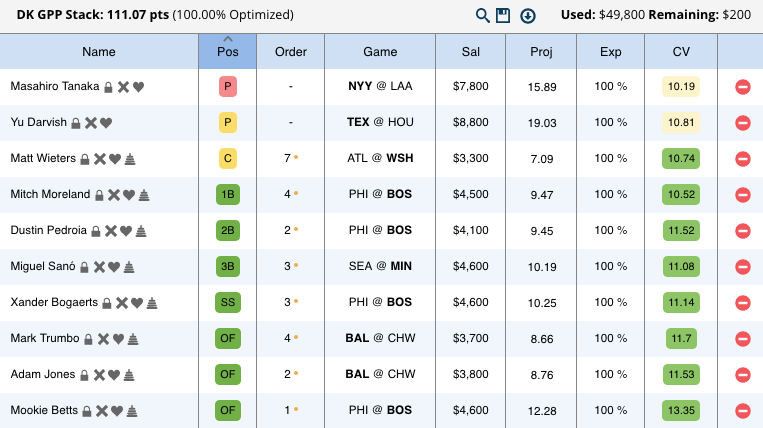 This sure as hell is a GPP lineup if I ever saw one, and it's all because of the pitching choices. Masahiro Tanaka and Yu Darvish both have upside on an individual basis, but the matchups are against low K% ball clubs. Both arms also haven't been consistent, which resulted in a drop in price. This can certainly pay off tonight, or fall flat. The offensive bats I have no issue with as the Boston comes in as a stack, and then Miguel Sano is my favorite top end bat of the night. Baltimore bats against Mike Pelfrey stand out as good GPP targets.