Take your daily fantasy game to the next level.
If you haven't checked out our PGA Lineup Optimizer, it is now live and you can find it here: https://www.dailyfantasycafe.com/tools/lineupoptimizer/pga

For the St. Jude Classic, Colussus chose the following lineup to be the highest scoring 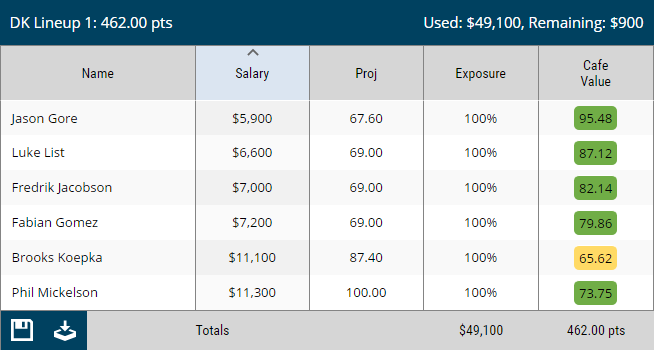 Phil Mickelson: One thing you must know about Phil Mickelson is that he turns it up a notch when the majors come around. The last three years, Mickelson has finished 3rd, 11th and 2nd. TPC Southwind is sort of a mini-Oakmont (site of next week's US Open) in Mickelson's eyes, most notably due to the small greens (roughly 5200 sq ft) and the type of short game shots you have to hit around the greens. He is playing solid golf this year with four top 10's, which include a 2nd, 3rd and 4th place finish. We know he can close and win, so in a pretty weak field, Lefty is a great anchor for your team..

Brooks Koepka: You gotta be excited about Koepka's chances this week. He is very comfortable at TPC Southwind, finishing 19th and and 3rd in his first two appearances. Last time we saw Koepka, he lost in a playoff to Sergio Garcia at the Byron Nelson. He's made 9 of 12 cuts, with three top 10's this year and has Ryder Cup aspirations. With a weak field and at a golf course where he has the length to have short irons into most par 4's, Koepka looks like a great investment this week. I'll also note that despite not showing a lot of emotion on the course, Koepka is a gamer and will want to put his previous playoff loss in the rear view with a win this week.

Fabian Gomez: When you can get the defending champion at $7200, it's almost a no brainer to have some exposure. The big question is how much exposure? Is he steady enough that we can count on him making the cut? That last question is one I'm not so sure of as Gomez has only made 10 of 17 cuts. With that said, Gomez seems to make the most of his opportunities, most notably winning the Sony Open earlier this year. He is the perfect GPP play, salary relief and upside are not easy to come by and the St.Jude has produced multiple champions, two of whom are in the field this week (David Toms and Justin Leonard).

Fredrik Jacobson: Freddy Jac is a polarizing player in DFS circles. He flashed brilliant play earlier this year, racking up 4th place finishes at the AT&T Pebble Beach and the Farmers Insurance Open at Torrey Pines. Those are two classic golf courses that really make you think about course management and strategy, an area where Jacobson excels. He has made six of his last seven cuts at the St.Jude and has three career top 10's. While his current form is not at the level that it was earlier in the year, Jacobson makes for an interesting GPP play, especiallly considering he's made 75% of his cuts this year (15/20) on a busy schedule.

Luke List: This is one pick I'm going to have to disagree with Colossus. List has only played Southwind once, and he missed the cut. He's made 8 of 18 cuts, and has failed to play the weekend in his last three tournaments. For $300 more, Camilo Villegas is a guy I like this week with some solid course history, including top 20's in five of his last six tries at Southwind. At the $6600 mark, Whee Kim has the skillset to make it through the weekend, and I'd much prefer him over List. Aaron Baddeley at $6500 is another player to consider, he's ranked 3rd in SG: Around the Green, and that could be enough to get him through the cut, although he hasn't had much success at Southwind, missing the cut in his last appearance.

Jason Gore: I've always liked Gore. Mainly because I've seen him flash some serious game, but he just hasn't been able to put it together after dealing with some health issues early in his career. The reasons to like Gore this week are that he is ranked 50th in Driving Accuracy, and 44th in GIR %, both important metrics for predicting success at TPC Southwind. Here's the downside though, he is ranked second to last in Strokes Gained: Around the Green. The greens are small comparatively to other Tour venues, so if he is on and hitting greens, Gore could be in for a nice week. If the wind picks up, or his drives don't find the fairway, Gore could be in serious trouble around these greens. He did finish 29th last year though, so there is room for optimism. Overall, at $5900, you are getting what you pay for...a highly volatile pick that could either make or break your team. If you want to build your team around two (or three) studs, you are going to have to dig deep in the player pool. Gore represents one of the better plays in the deep end.