Post all your Northern Trust Open questions in this thread!

I am new to playing PGA DFS. I typically stick to NFL and NBA, but with NBA on break I stuck one lineup in a GPP last week and did well. I thought that I would do the same thing this week just to see what happens. Then I will probably just stick with NBA for the rest of the season.

I used the players' histories at this course and tried to fit the best of those players in close to the max salary. I am not up to date on PGA news, so any comments about the lineup would be helpful, as I don't know if anyone is dealing with injuries or if there is anything else I should be aware of. 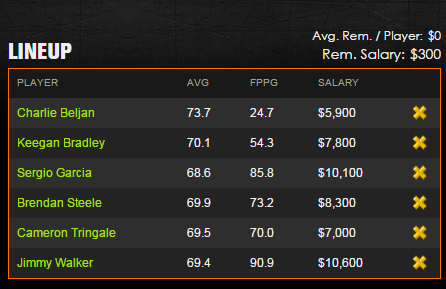 I am also thinking of pivoting to this by swapping Garcia/Walker for Schwartzel/Johnson. Please let me know what you think of either lineup. Thanks. 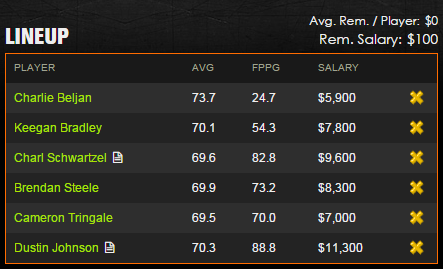 I don't have a lineup yet but have a strategy question. On FantasyHub you have seven golfers but they only count the scores for five of them. Would you totally punt the bottom two golfers with the lowest priced players possible to get the studs in GPPs.

Thanks for posting. Both lineups look good from a roster construction standpoint, but if I had to choose one, I would opt for the second one.

Roster construction wise, I think you nailed it and balanced the lineup very well.

Dustin Johnson is a great anchor, and one of my top PP$ plays for the week. When you spend money in the top tier, you want to know that player is capable of winning the tournament outright, and DJ certainly fits the bill in that regard. He's won at least one PGA Tour event in each of the last eight seasons, and has done very well historically at Riviera, finishing runner up in each of the last two seasons (last year in a playoff). Spieth is going to be the favorite any time he tees it up, but at almost 2K more than DJ, I don't think he is the superior PP$ option this week. That takes a lot for me to say, especially when comparing these two, as they have a history.

Schwartzel and Bradley both have impressive course history at Riviera, with Schwartzel racking up top fives in 2013 and 2014 (and is coming off a win in his native South Africa), while Keegan finished 4th in 2015, finishing one shot out of a playoff, a T20 in 2014, and a t16 in 2013. Consistency is not a strength of Keegan's the last several years, but considering his course history and the fact that he is offering salary relief, he is a solid choice this week.

Beljan is an interesting option this week, as Riviera has been the site of some of his better results, including a solo 2nd in 2013 and a T16 in 2014 when he came into the final round one off the lead. He is one of the more irritating golfers to play in DFS because he has a history of coming out red hot on Thursday, only to blow up very badly in the following rounds. His bomb and gouge style is not one I would peg for success at this course, as one wayward tee shot can destroy an otherwise very good round, but he is comfortable on the course and that goes a long way. At $5900, he is a necessary evil if you want to play a stud and have balance in the rest of your lineup.

Steele and Tringale also have had moderate success at Riviera, but if I had to nitpick one area of your lineup, it would be those two. I think you'd be better off pivoting from Steele/Tringale to Freddie Jacobsen/Will McGirt, as I think they are in better current form, and have similar, if not better, course history. McGirt is coming off a missed cut at the AT&T, but he's been in town for almost an entire week preparing, and that should suit him well..he's finished T14 and T6 the last two years here.

Freddie Jac is one of my favorite plays this week, he is coming off back to back 4th places, and his razor sharp short game should suit him well at a golf course that has seen the most missed putts inside 3 feet for five consecutive years on tour.

Hope that helps, feel free to ask any questions...

I think there is certainly merit to that strategy. Interestingly enough, Riviera is a course that has had some very unpredictable results over the last five years, so that "may" not be the most sound strategy this week.

The course is one of the most difficult on tour, and that difficulty manifests itself on the greens, specifically at very close range. As I mentioned above, Riviera has had the most missed putts inside 3 feet for five consecutive years, which is most certainly a pattern with hard stats to back it up. Missed putts in that range are usually anomalies for tour pro's, in 2015 Jason Day made 614 of 614 putts from 3 feet and in. Lucas Glover finished last on tour, but he still made 96.5% of his putts from 3 feet and in, so you can see the difference between the best putter and the worst putter comes down to one missed 3 foot putt per tournament, even less actually. In 2015, there were 72 missed putts inside 3 feet at this tournament!

When short putts are missed at a much higher frequency (think complete outlier), it tends to balance out other skill sets like Ball-Striking and Driving Accuracy, making it much harder for the cream to rise to the top.

If I were to choose a strategy given FantasyHubs lineup settings, I would want to have as many players inside the top 15 as possible. 15 is somewhat of an arbitrary number, but it is where I am seeing the biggest drop off of proven talent.

I'm going to build some teams over there and I'll post if anything jumps out at me.

That's exactly what I was thinking as I made the second lineup. I usually always stick with GPP's, so I am always on the lookout for upside.

Also, thanks for the awesome response and the suggestion to pivot to Jacobsen/McGirt. After looking at their histories, I think they have more upside. Tringale definitely wasn't a favorite option of mine, but he seemed to be relatively safe, which isn't the worst thing to have in a lineup when you take other risks.

I really appreciate the thought that went into the response and for you taking the time to analyze lineups. I may still slightly tweak my lineup from here on out. I am trying to decide if I want to be slightly more balanced or not. But I think most of my lineup is pretty well set. Thanks again!