For the AT&T Byron Nelson Classic, Colussus chose the following lineup to be the highest scoring. 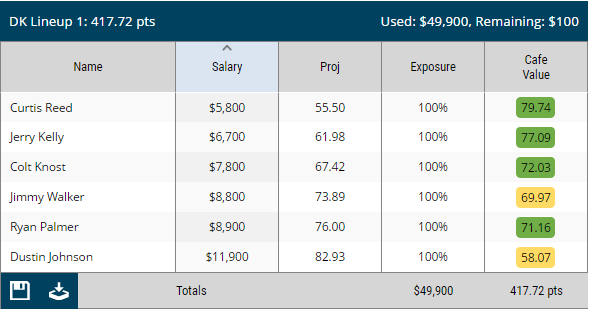 Dustin Johnson: Johnson is perfect in all six tries at the Byron Nelson, and that is no surprise given the advantage that he has at the TPC Four Seasons course. He's finished 8th, 7th, 20th, 7th ,4th and 63rd going to 2008. Tied the course record with a 62 in last year's third round. He comes in at $11,900, with only Jordan Spieth at a higher price point ($12,500). He's made 10 out of 10 cuts this year with five top 10's, and has been knocking on the door. He's due for a win, I will have heavy exposure to both Johnson and Spieth this week given the relative weakness at the top of the field.

Jimmy Walker: There are reasons to like Walker this week, but there are reasons to be worried about his prospects too.. What it comes down to for me is his price point. At $8,800 he carries very little risk, and he's on his home turf playing in Texas. He finished 2nd last year at the Byron Nelson, and has made 6 of 7 cuts over his career. I generally favor course history over current form, and in Walker's case, missing the previous two cuts is troubling but not to the point of fading him in GPP's. Plainly put, his upside is worth the risk, but I wouldn't overexpose myself. I'll have 5% invested in Walker this week.

Ryan Palmer: Palmer, a native Texan has both course history and current form on his side this week. His price is super soft given his recent form, which includes a T4 at the Texas Open and a solid 23rd at the Players Championship. Palmer lost in a playoff in 2011 at the Byron Nelson, and has since made all four cuts with two top 10's. I will have heavy exposure in Palmer this week.

Colt Knost: As we continue to feed data into Colussus, we will start to see a decrease in recency bias. Knost has more going for him than just an impressive 3rd place finish at the Players last week, which included a course record 63. He's a Dallas resident and will be on familiar ground this week. His course history includes a T10 last year, and 21st in 2013. Knost has been playing well this season, surviving 15 of 16 cuts. He may not have a lot of high finishes, but at $7800 he's providing consistency in the middle of your lineup.

Jerry Kelly: Speaking of consistency, Kelly is a bargain this week at $6700. Hes made 11 of 13 cuts this season, which includes one top 10. At 49 years old, Kelly's ability to win tournaments is probably in the past, but he's a very consistent golfer who can win GPP's for you with a top 25. He's made four consecutive cuts at the TPC Four Seasons, and given the momentum he created with some solid golf last week, there's no reason why that trend won't continue this week.

Curtis Reed: This is a deep sleeper pick, but I love it. Reed is a Texas native, who attended Houston University, has won Monday qualifiers into PGA Tour events previously and is a product of the MacKenzie tour. He has serious game and go very, very low..evidenced by Reed's nickname, Mr. 57. He got the nickname after shooting not one, but TWO 57's in the last three years. To put that in perspective,sine 1977, there have been only 27 rounds of 60 or better in PGA Tour events...yet no one has every shot 57 in a tour event. Perhaps Reed will be the first.