For the BMW Championship, Colussus chose the following lineup to be the highest scoring. 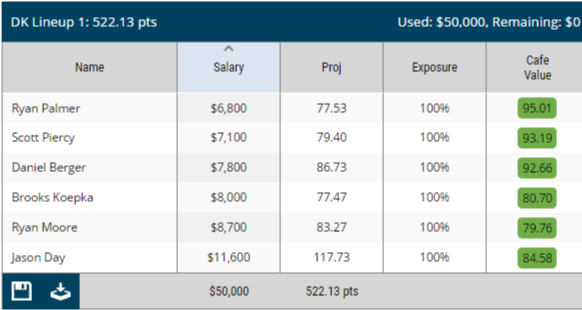 Jason Day: I prefer Rory McIlroy over Jason Day, given Rory's recent form and the fact that Rory won the BMW Championship the last time it was held at Crooked Stick. That year, he also won the Deutsche Bank Championship the week before the BMW, so it feels like deja-vu for Rory. With all that said, Jason Day is the #1 player in the world for a reason, and even in the midst of a "mini slump", Day has finished in the top ten in 7 of his last 15 events. That includes a win at the Players and the WGC Dell Match Play, a 2nd place at the PGA Championship and a 3rd at the WGC Bridgestone. Day's skill-set is a great match for Crooked Stick. He is 1st in SG: Putting, SG:Total and Scoring Average, 16th in SG: Tee to Green and 30th in SG: Approach. Crooked Stick has four par 5's, and three of them can easily be reached in two for Day, which is a great sign considering he leads the Tour in Eagles (13th). In a no cut event, hole by hole scoring is just as important as the points your receiver for each players finish. Day is also #2 on the FEC list, so he has extra incentive heading into the week. There are some interesting Day/McIlroy stacks that are in play, and I think that is definitely worth looking into if you are putting 10+ lineups into your preferred GPP's.

Ryan Moore: Moore has quietly been playing fantastic golf as of late, recording his first win of the season at the John Deere Classic, and then backing that up with a T7 and a T8 to open the Fed Ex Cup. Moore is solid value at $8,700 and is the perfect middle man in GPP lineups. Moore is 25th in scoring average, 20th in SG: Total and 15th in Driving Accuracy. I will have heavy exposure to Moore this week.

Brooks Koepka: It looked as though Koepka was poised to make a late season run. He finished 2nd at the St. Jude Classic and then backed that up with a 13th at the US Open. Unfortunatley for him, Koepka hurt his ankle and was sidelined for four tournaments and then again for three tournaments. Upon his return, Koepka went on a run, finishing 4th at the US Open and 9th at the Travelers. After a solid start at the Barclays (-5 after two rounds), Koepka shot 73 in both round on the weekend and fell all the way back to 70th. He couldn't get much going at Deutsche Bank and finished 57th. He sits in a precarious position right now, as he is #30 on the Fed Ex Cup List, and will need to play well to guarantee a spot in the Tour Championship. A motivated Koepka at $8,000 is a great GPP play. There is no cut, so he can play the type of relaxed golf that got him to 5th in birdie average, 14th in SG: Off the Tee, 21st in SG: Putting and 10th in scoring average.

Daniel Berger: I've been targeting Berger the last few weeks and had heavy exposure to him a the Barclays, where he couldn't get into a groove and finished in 70th place. Berger started off hot at the Deutsche Bank, shooting 67-68 in his first two rounds. But, it was not to be as Berger faltered over the weekend shooting 74--71 and dropping all the way back to 41st place. Berger has a lot on the line this week. He sits 31st on the Fed Ex Cup list, and will need to improve his status if he wants to be playing at East Lake two weeks from now. Berger is also on the back end fringe of qualifying for the Ryder Cup. He would need to go out and win this week to have a chance. He is a solid option at $7800 but there are two metrics that worry me. He sits 134th in SG: Around the Green, and that could be a problem on a course that has much smaller greens (averaging 5000sq ft). He is 34th in SG: Approach, so if he can excel with his ball--striking, he can cancel out his problems around the green. The second metric is Driving Accuracy, where Berger sits 144th. He is 36th in Driving Distance, which is a big advantage at Crooked Stick GC. If he can keep his ball in the short grass, Berger has a great chance to make a deep run, but if he gets wayward off the tee, it is going to be a long tournament for Berger.

Scott Piercy: Piercy is another player who sits right on the edge of qualifying for the Tour Championship. Currently, he sits 35th in Fed Ex Cup standings. Piercy was something of a golf hustler in his early days, and he was the winner of the "The Ultimate Game" where he won two million dollars in a winner take it tournament. Essentially, the more pressure that is put on Piercy, the better he performs. He will have to wake up his putter, as he currently sits 151st in SG: Putting. He sits 89th in birdie average, but 17th in eagle average. There are eagles to be made at Crooked Stick, and this might be the only week I suggest you looking at birdie and eagle average as a qualifier. Piercy isn't increasing your risk at $7,100, and he brings some upside, having two runner up finishes this year to go along with three top 10's and 11 top 25's. With big money on the line at East Lake, we will see whether Piercy can rise to the occasion again and qualify for his first Tour Championship.

Ryan Palmer: Palmer has been a solid option all year, making 19 of 22 cuts with two top 10's and nine top 25's. The problem is this is a no cut event, and Palmer doesn't necessarily bring the upside of some other players in his price range such as Kevin Na, Jason Dufner, or even Billy Hurley III. Palmer is 14th in birdie average, 13th in eagle average and 24th in scoring average, so he has the game to rack up points in the no cut event. Palmer is 8th in SG: Off the Tee, a metric that I am paying close attention to at Crooked Stick. He is also 13th in Driving Distance, but 136th in Driving Accuracy. At $6,800, Palmer is a nice risk/reward GPP option and he fits nicely in this lineup with other high powered players.