For the Deutsche Bank Championship, Colussus chose the following lineup to be the highest scoring. 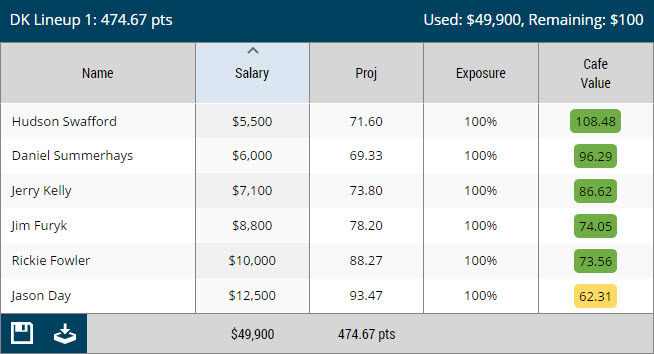 Jason Day: One of only eight players to have at last three top 10's at TPC Boston since 2002, Day has yet to win the Deutsche Bank Championship, but it is setting up very well for him to change that this week. Day has had an outstanding 2016 season, winning twice to go along with nine top 10's. He came into the Barclays in 1st place in the Fed Ex Cup rankings, but he has since surrendered that lead to Patrick Reed (after Reeds win). Day is my clear favorite this week and there is enough value in the lower tiers to subsidize his salary of $12,500 and balance out your GPP rosters.

Rickie Fowler: Fowler had a great chance last week to cement his Ryder Cup status and add another high profile win to his PGA Tour resume. He wasn't able to close down the stretch, but I still have a lot of confidence in him, especially at a venue like TPC Boston where he has the added confidence of winning a Fed Ex Cup event. Day/Fowler and Day/Scott will be the stack I have the most exposure to this week.

Jim Furyk: I like this play, as Furyk provides stability in the middle of your GPP lineups. Furyk has excellent course history at TPC Boston, surviving 10 of 10 cuts, to go along with a 4th, 6th, 7th and 8th place finish. He has played well in 2016, adding a runner up finish at the US Open to his lengthy resume. Furyk is priced very softly at $8,800 allowing you to pair him with two other elite options in studs/duds type lineups. I will say this though, I've found myself having to go down to other options like Matt Kuchar to balance out my GPP teams. That $400 makes a big difference in spots this week, and in this team's case, I would be going down to either Matt Kuchar/Charlie Hoffman or Brandt Snedeker/Charl Schwartzel in place of Furyk/Jerry Kelly.

Jerry Kelly: Kelly has some good results at TPC Boston, which Colossus has taken notice of and enhanced his projections to a bit higher than they would be normally. He's made 6 of 8 cuts at TPC Boston, which includes a 9th in 2015, and a 10th and 11th in previous appearances. The course fits his skillset fairly well, but I would still rather have Charlie Hoffman or Jimmy Walker in his price range, and that is due to their upside. Kelly isn't a bad pick at all, and if he makes a top 10, you've got GPP gold this week.

Daniel Summerhays: There were some converging trends with Summerhays last week, where he showed well on difficult courses but not so well on courses that are above average in length. When par is a good score, Summerhays is usually a good choice due to his elite scrambling and putting ability. That wasn't the case at the Barclays with Summerhays missing the cut, but I still think he is a fair play in studs/duds type GPP lineups. He has top 25 upside, which may be enough at the bottom of your lineup to get it done, even in a short field.

Hudson Swafford: In his only appearance at TPC Boston (2015), Swafford finished 33rd. He is currently ranked 81st in Fed Ex Cup points, so he will have to advance at least eleven spots this week if he wants to make it to the third phase of the FEC playoffs. Swafford has impressive stats, aside from his scrambling, and his ball-striking prowess will come in handy on a course that requires more long irons than you might think by simply looking at the scorecard. He is a deep play, and one that could pay off rather nicely with a made cut and a top 40. At $5,500, he comes with very little risk, but you also have to be prepared for him missing the cut, so it is best to temper your expectations and keep your exposure on the small side.