For the Valero Texas Open, Colussus chose the following lineup to be the highest scoring. 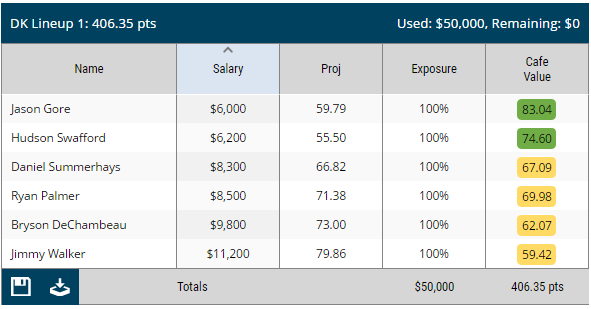 Jimmy Walker: Not only is Walker the defending champion, but the Valero is also a home game for the native of San Antonio. Walker has two geographical areas where he seems to shine, the first is the early season swing in Hawaii and California, and the other is when he comes home to Texas. In his last three visits to TPC San Antonio, Walker has finished 1st, 16th and 31st, which is no surprise given the fact that the strength of his game is his approach shots and ball-striking, which tends to be the best indicator of success at the Valero. He and Brendan Grace are the favorites at 17/1, and represent a huge discount salary wise compared to the top tier in recent weeks. Walker knows how to win, and in a relatively weak field that accounts for alot.


Bryson DeChambeau: This was a toss-up for me between DeChambeau and Charley Hoffman. Hoffman has both the tour experience and track record at the TPC Valero, but there is something about DeChambeau that makes me think he is hungrier for a win. DeChambeau is coming off of a very strong showing in his first professional event, a T4 at the Harbour Town Golf Links. The margin for error at Harbour Town is so small, so for him to put together four solid rounds in his first appearance spoke to a great deal about his readiness as a PGA Tour player. The TPC at San Antonio is a tough track, however mental toughness is something DeChambeau has in spades. I couldn't fault you for taking Hoffman in his place, but keep in mind that DeChambeau went to school at SMU and should be relatively comfortable playing in Texas conditions.

Ryan Palmer: Another native Texan (see a pattern developing?), Palmer has showed he can play well at the TPC San Antonio, finishing 6th in 2015, while also adding a 15th in 2013, and a 9th in 2010. Palmer has not played his best golf of late, especially this past weekend where he finished with a pair of 76's to close the weekend at Harbour Town.. With that said, he's survived ten consecutive cuts and should be under the radar and low owned this week. Sitting 88th in the Fed Ex Cup standings, Palmer needs to regain the form that saw him start off his season with top 25s in four of his five events.. Normally Palmer's salary would be inflated a bit higher this week, making him a nice GPP play at a tournament where he's found success in the past and should be right at home playing in front of his fellow Texans.

Daniel Summerhays: Summerhays represents the best value across the board this week. Course history trumps current form for me at a place like the TPC at San Antonio, and you'd be hard pressed to match another players success with Summerhays over last three years. He's finished 4th, 2nd and 7th, which is the lowest three year aggregate of any player on Tour. Now comes the bad news, Summerhays has missed three of his last six cuts, and has not been able to string four solid rounds together. This past week at the RBC, Summerhays fired opening rounds of 72 and 68 to be in the hunt going into the weekend, only to blow up and shoot an 80 on Saturday, albeit in very tough conditions that also saw World #1 Jason Day shoot +8. Summerhays did rebound with a final round 69, so I am hopeful he can continue that momentum into this week and find success in familiar confines.

Hudson Swafford: In a wide open week where most of the field is capable of winning, having success in GPP's comes down to find low-owned players who can rack up a top 15, top 10 or top 5. Swafford doesn't have the current form (two consecutive missed cuts), nor he does he have stellar course history (T35 in 2015, MC in 2014), however he does have a relevant skill-set, namely his ballstriking. He's 72nd in GIR %, 33rd in proximity to hole, and 7th in total driving. He's also 31st in ball-striking, and 48th in the all-around. He is a very talented player who has yet to really break through, but if there is anything we've seen the past two years, it is that the Tour is filled with parity.

Jason Gore: There are several guys you can think about taking in the bottom salary tier, but I doubt Jason Gore would stand out as one of them. He's coming off consecutive missed cuts, and has missed the cut the last two times he's played the TPC at San Antonio. Much of his allure comes from his super-cheap salary, and his birdie:bogey:par differential. He sits 71st in ball-striking, 68th in GIR and 50th in all-around. Prior to his two missed cuts, Gore did have an 11th place finish at the Valspar, another demanding golf course that plays to the strengths of ball-strikers. He is definitely a wild-card this week, capable of finishing with a top 15, or similarly capable of making the cut, however he should be very low owned and that is exactly what you are looking for in GPP lineups.