For the John Deere Classic, Colussus chose the following lineup to be the highest scoring. 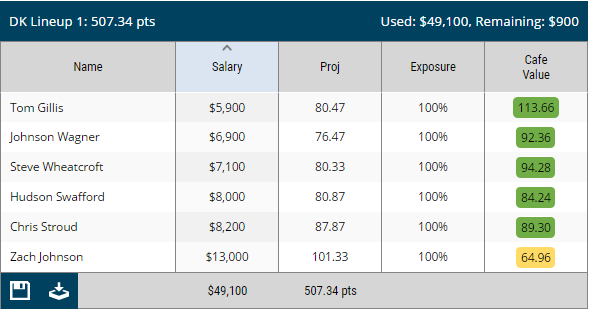 Zach Johnson: With an extremely weak field due to the Olympics this week, the PGA Championship last week and the Fed Ex Cup around the corner, Zach Johnson is by far the superior option in the top tier. The only issue is that his salary is so high ($13,000), he's priced as though he is an elite player with a high win percentage along the lines of a Jordan Spieth, Dustin Johnson or Jason Day. Although ZJ has won two majors and 12 tournaments for his career, he is not in the same league as the aforementioned players. So where does that leave us? Well, he makes a great anchor for GPP teams and is worth heavy exposure because his course history is as good as it gets. In his last seven starts at the John Deere, ZJ has finished 3rd, 2nd, 2nd, 1st, 3rd, 21st and 2nd. That is absolutely ridiculous, so there's no reason to overthink ZJ this week. It's not easy building quality teams around him, but with considering the JDC is typically a birdie-fest, there are more than enough options to fill out your GPP rosters and still feel good about getting all six guys through the cut.

Chris Stroud: Stroud has been playing solid golf as of late, making five consecutive cuts which includes a 13th at the Dean & DeLuca Invitational. His pricing is a function of a weak field, so although it seems really high for a player of Stroud's caliber, you have to pick your poison this week. Stroud is coming off a 5th place finish last year the JDC, and has the type of skillset where he can rack up birdies and go low. There are some other options in his range that I prefer maybe a little more, such as Scott Brown, Jaime Lovemark and Billy Hurley, but Stroud is a player who should fare well with very low ownership rates. He makes for a nice GPP play.

Hudson Swafford: If you were to look purely at stats, it would come as a total shock that Swafford has not achieved a level of success that matches up with those stats. Hes 28th in SG:Off the Tee, 61st in SG: Approach, 62nd in SG: Putting, 9th in Driving Distance and 24th in GIR %. Basically, he has a very strong game with no discernible weaknesses, but he doesn't excel in any one particular area either, which tends to limit his upside and he has trouble putting together the type of four consecutive rounds needed to win a tournament. With that said, at $8,000 he is fairly priced because he is dependable when it comes to making cuts (18/26), and comes into the week having made nine consecutive cuts. While he's not my bet to win the tournament, if he were to break through for his first career victory, it would come at a tournament where ball-striking and birdie conversion % are paramount to success.

Steve Wheatcroft: This is where the waters start to get a little murky. In order to fit ZJ into your lineups, your going to have to take some calculated risks on your GPP teams. Wheatcroft has made 14 of 23 cuts this year, and four of his last five, which includes a season best T5 at the RBC Canadian Open. Considering he shot a 2nd round 77, but still managed to finish in the top five should tell you something. He shot 64/67 on the weekend and displayed the type of game that matches up with what will be demanded of the players this week. His stats are really ugly, so there is nothing there that would point to him having success this week, but he did manage to finish T8th last year at the JDC, so there is some good course history to go on. Personally, I prefer Johnson Wagner ($6900) Michael Kim ($7000) and Vaughn Taylor ($6900) over Wheatcroft, but with such a wide-open field, you can't really argue for or against many of the players in the 7K range as GPP options. It is a week where it makes sense to have your exposure spread out and not over-expose yourself to any player not in the top tier.

Johnson Wagner; The pride of the MET Section, I have a soft-spot in my DFS heart for Wagner, having watched him clean up the local tournament circuit in the Westchester, NY area. Wagner's strengths lie in his ball-striking and his putting, so there it should come as no surprise that he has fared very well the last two years at the JDC, finishing 5th and 7th and having a legitimate shot to win on Sunday before fading during the back nine. Due to his course history, Wagner will be a popular GPP play, but he is also the best option in his price range and brings with him the possibility of actually winning the tournament, having three career PGA Tour victories to his credit. I can't bring myself to have more than 10% exposure (which is even pushing it) to Wagner, but it won't surprise me if he is sitting on the winning team come Sunday afternoon.

Tom Gillis: Old Tom Gillis, what a story. His PGA Tour career dates back to 1993, and at the ripe age of 48, he has yet to record his first PGA Tour victory. Last year he came oh-so-close, battling Jordan Spieth down the stretch before Spieth finally did what Spieth does...close out tournaments and breaking the hearts of many fans who were rooting for the old timer. Since then, Gillis doesn't have a whole lot to show for, making only 4 of 10 cuts this year with his best finish being 35th several weeks back at the Barbasol. At ($5900), Gillis doesn't represent a whole lot of risk, but even at that low price point, expecting anything more than a top 50 is probably asking too much. He is 4 for 4 lifetime at the JDC in terms of making cuts, so if you are forced to make Studs/Duds lineups that include Zach Johnson, Gillis seems like a fair play. The above lineup that Colossus picked out left $900 on the table, and I think that money is much better spent by upgrading from Gillis to a guy like Luke List or Blayne Barber, two young, spry players who have the firepower to go very low in any individual round.