For the Open Championship, Colussus chose the following lineup to be the highest scoring. 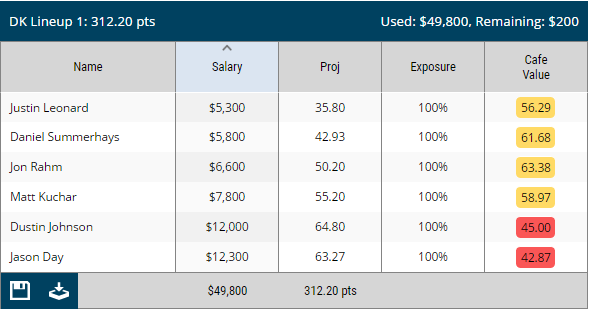 As you can see, Colossus has chosen to go with a Studs/Duds type lineup construction, which seems fitting for this week given all of the value in the lower tiers. While I have some players I prefer over Summerhays and Leonard, Rahm, Kuchar, Johnson and Day is a core that I like very much.

Jason Day: For DFS purposes, Day is the favorite to leave Royal Troon with a rather large trophy in his hands. The usual suspects (McIlroy and Spieth) are right behind him at $11,900 and $11,700, but Dustin Johnson owns the second highest salary at $12,000 coming off his first major championships at Oakmont, and you'll find him just below. Day is the favorite because he has no weaknesses, which allows his game to travel well and have success on all types of tracks. His only impressive finish at the Open was last year, where he finished 4th, one stroke out of a playoff with Z.Johnson, L.Oosthuizen and M.Leishman. His last eight tournaments look like this, 1st at the Arnold Palmer Invitational, 10th at The Masters, 23rd, 5th, 1st at the Players Championship, 27th, 8th at the US Open and 3rd at the WGC Bridgestone. As the #1 player in the world, Day will be a staple in many GPP lineups.

Dustin Johnson: Coming off his win at the US Open, DJ managed to come from behind on Sunday and pass Jason Day to win the WGC Bridgestone Invitational. Right now, his level of golf has surpassed that of Day, McIlroy and Spieth because it seems as though it is impossible to beat a guy who is hitting the ball that far, making putts and avoiding the mistakes that plagued him earlier in his career. He has made his last six cuts at the Open Championship, finishing 49th, 12th, 32nd, 9th, 2nd and 14th. Royal Troon is not a long course by any means (7,190), but the weather off the coast of Scotland is terribly unpredictable, which is what makes this event unlike any other in golf and so much fun for spectators. The short par 4's are where DJ can really gain on the field, as the Members Champion is said to have driven the green three times in succession to start his round earlier this year. I don't care who he is, if he can do it, so can DJ.

Matt Kuchar: Kuchar has not had the type of success at the Open that you'd like to see at his price range, but his current form cannot be ignored. Over his last six tournaments, Kuchar has finished in the top six in five of them. Even though he has not won any of those tournaments, Kuchar is knocking on the door and his recent placement as a representative for Team USA in the Olympics will give him added motivation to show the world just how good he really is. He has never won a major, so if you are considering Schwartzel, Casey, Wood, Knox or Leishman, I cannot argue with those choices. In fact, I think dropping down to Leishman at $7400 is a solid move, as it gives you some flexibility to pivot off of Leonard or Summerhays.

Jon Rahm: Is he the real deal? That's what many golf fans were asking themselves when he turned pro at the Quicken Loans and proceeded to put himself in the top 5 for much of the tournament, including leading after two rounds. He finished 3rd and played brilliant golf for most of the weekend. What really has me excited about his prospects was the 23rd he registered at Oakmont. When you are playing Major Championship venues--especially US Open courses--there is a certain amount of restraint needed to excel, a sort of patience that really only comes with experience. However, a guy like Jordan Spieth has shown he has the type of course management skills that even veterans drool over, and Rahm is very much in the same class. He is humble, but don't get it twisted, Rahm knows he can get it done and is coming into Troon with his eyes on the trophy.

Daniel Summerhays: An interesting pick here, but one that I support. Summerhays is coming off his best Major Championship finish, placing 8th at the US Open. He is a grinder and an excellent putter, which are the type of players that seem to always hang around at the Open. He has never played in an Open Championship, but his style of play and recent form are solid indicators of what his potential can be at Royal Troon. Another option at $5800 are Jordan Niebrugge--who finished 6th as an amateur last year and had the lowest total of any amateur in Open championship history.

Justin Leonard: Leonard is no stranger to the Open Championship, having won the title in 1997 at Royal Troon, the host venue this week. He also came close again in 1999 where he bogeyed the final hole to fall into a playoff where he eventually lost what would have been his 2nd Open Championship.. Having so much experience playing links golf and great vibes at Royal Troon in particular, Leonard is a sleeper at $5300. Will he win? No, most likely not, but he has the type of course understanding, poise and experience to finish with a top 20. Another option is Callum Shinkwin, who played his way into this week's major with a sparkling final round in last week's Scottish Open. He's made 10 of 13 cuts on the European Tour, and comes into this week with top 10's in his last two tournaments.

dk gpp does this need some help?

I'm not liking Spieth this week given his inaccuracy off the tee and the fact that his putting advantage is very much neutralized by ball-striking.

I like the Studs/Duds lineup construction, but I think you are going too deep.

I'd swap out Spieth for Scott/Garcia/Stenson...and then upgrade Shinkwin and Leonard. I like Shinkwin/Leonard as deep sleepers, but it also depends on how many lineups you are putting in, as your current lineup would be fine alongside 20-30 other lineups, but if you only have a couple in play, I think it is better to balance your lineups a bit more.

Knox is a decent play, but I think you get as many points or more from Raf CabBello, Molinari or Kevin Chappell. I also like Gary Woodland in the low 6000's.

Hope that helps, feel free to post a revision and I'll take a look. Good luck this week!