For the RBC Canadian Open, Colussus chose the following lineup to be the highest scoring. 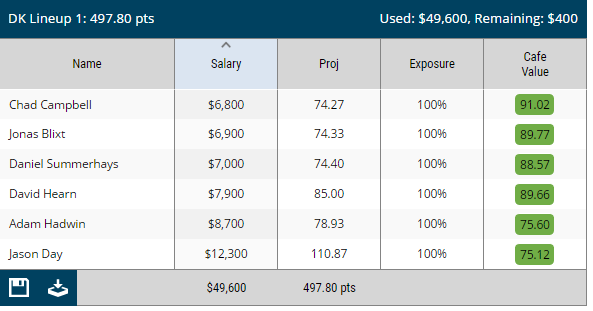 Jason Day: As the defending champion and #1 player in the world, this is a layup. Yes his salary is super high, but he makes the perfect GPP and cash game anchor. Last year, Day birdied the last three holes including the 72nd hole, where he made a 20+ foot putt to outlast Bubba Watson. Day never contended at the Open last week, but he gets a pass considering Henrik Stenson(and Phil Mickelson for that matter) was playing at such an exceptional level. Glen Abbey sets up very well for Day, as it is a track that allows players to go after pins and it's four par 5's cater to his ability to get home in two. There are some good players in the field, but there is no need to overthink this, Day is the best option.

Adam Hadwin: The Canadian stepped up his game last year with a 7th place finish playing in front of his fellow countrymen. It was one of Hadwin's best finishes all season and despite his lack of firepower, Glen Abbey is a gettable course for him because of his putting prowess. At $8700, I think he is somewhat overpriced for GPP's considering he's only made one top 10, but for cash game lineups he makes sense. Making 15/21 cuts and having the motivation to play well both for Olympic purposes and the fact that he is playing on his home soil puts him in play.

Chad Campbell: Campbell has quite a few things working in his favor this week. He's coming off five straight cuts made and he's finished in the top 20 the last two editions of the RBC played at Glen Abbey. The course sets up very well for him and plays to his strengths as a ball-striker. His price tag of $6800 is one of the better values this week, so I'll have heavy exposure to him in my GPP lineups.

David Hearn: Another Canadian, Hearn is looking to build on his solo 3rd place last season. He's in great form and has clinched a spot in the Olympics as the top ranked player, so I expect him to feed off the crowd support he will get at Glen Abbey. Hearn is a very good ball-striker, a fact that is aided by him being solid across the board in other categories. On a course where he can keep the ball in play and still have short irons into greens, Hearn should again be in the top 10, making him a great value at $7900.

Daniel Summerhays: Summerhays played very well in 2015 at Glen Abbey, finishing in 11th place and returning a great ROI (his pricetag was low 7000's IIRC). I generally prefer to go with Summerhays on courses where scrambling is at a premium and par is a good score. That is not the case this week, so there isn't a whole lot of upside above a top 15. With that said, he's only $7000 and should make the cut on a course where he can shoot 70-70 and make the cut.

Jonas Blixt: Blixt finished 22nd last year, so he is in the consideration at $6900. He is a streaky player, his ball-striking especially, so there is the chance that he goes low on a course that has yielded some very low scores in recent editions. On the flipside, he is streaky, which also means that he misses enough cuts to make you nervous, having made only 12 cuts in 20 tournaments in 2016.. When you compare him with other players in his price range, Blixt sticks out with two top 10's, a 3rd place at the AT&T Pebble Beach and 6th at the Farmers Insurance at Torrey Pines.